Pesticide residues were detected in 59% of U.S. food samples tested by the U.S. Food and Drug Administration in its most recently completed annual testing program, the agency revealed in a new report. 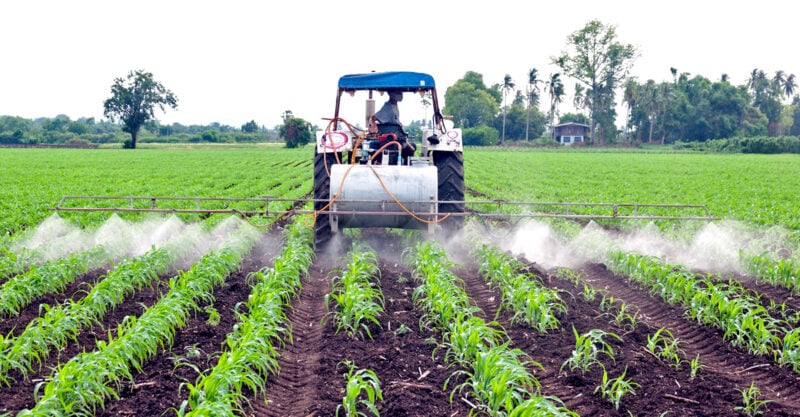 Pesticide residues were detected in 59% of U.S. food samples tested by the U.S. Food and Drug Administration (FDA) in its most recently completed annual testing program, the agency revealed in a new report.

Roughly 77% of domestic fruits, 60% of U.S. vegetables and about 53% of U.S. grains sampled showed residues.

It is common for conventional farmers to use a range of pesticides, including herbicides, insecticides and fungicides on their fields, and sometimes apply the chemicals directly onto their crops, as a means to fight weeds, bugs and plant diseases. Residues of these chemicals are found not only in food but often in drinking water as well.

Both the FDA and the U.S. Department of Agriculture have been tracking levels of pesticide residues in foods for decades, reporting their findings annually.

The FDA said its 2020 sampling was reduced by the COVID-19 pandemic. It did not include U.S. milk or dairy products this year in its sampling. The FDA said 84% of the samples for this report were imported from other countries. The new report is for the fiscal year 2020 but was just finalized and released this month.

The report shows that residue detection is up slightly over the 2019 analysis. The FDA’s 2019 report found that 57.6% of domestic samples had pesticide residues. Imported foods analyzed for the 2019 report showed 50.6% with residues.

The FDA, along with other government agencies, say that pesticide residues in food are not considered a human health risk, unless they rise to certain “maximum residue limits” set by the U.S. Environmental Protection Agency (EPA) for each pesticide used in food production.

The FDA said that in its most recent sampling, 96.8% of domestic and 88.4% of imported human foods were compliant with federal standards and not in violation of maximum residue limits.

That is down slightly from 2019 when the FDA said it found 98.7% of domestic and 89.1% of import human foods were within allowed pesticide residue limits.

“The findings show that the levels of pesticide chemical residues measured by FDA in the U.S. food supply are generally in compliance with EPA pesticide tolerances,” the FDA said in the report.

But many scientists and health professionals have increasingly come to doubt regulatory assurances about the safety of a steady diet of pesticide residues, questioning what long-term consumption of trace amounts of pesticides in food could be doing to human and animal health.

They also are concerned about the fact that the EPA has in multiple cases declined to apply an additional tenfold margin of safety for infants and children when setting the legal levels for certain pesticide residues. The EPA has said no such extra margin of safety is needed to protect children in those cases.

“As a pediatrician who has worked for many decades to protect children against hazardous exposures in the environment, including pesticides in food, I am deeply disturbed by the finding that 59% of U.S. food samples tested by the FDA contain measurable quantities of toxic pesticides,” said Phil Landrigan, who directs the Program for Global Public Health and the Common Good at Boston College.

“While I understand that most of these pesticides are present at levels below federal pesticide standards, I also know that these standards can be influenced by political pressure and that they do not always protect our children’s health,” Landrigan said.

Glyphosate is classified as a probable human carcinogen by the International Agency for Research on Cancer but the EPA considers it not likely to cause cancer.

The top pesticide found in animal food, according to the FDA analysis, was glyphosate. Glyphosate residues were detected in 17 of 27 animal food samples, the FDA found.