In an exclusive interview with The Defender, Jeffrey Beauchine said his mother, Carol, knew her Creutzfeldt-Jakob Disease was related to the Moderna shot. Watching her death was like “something you see out of a movie,” he said. 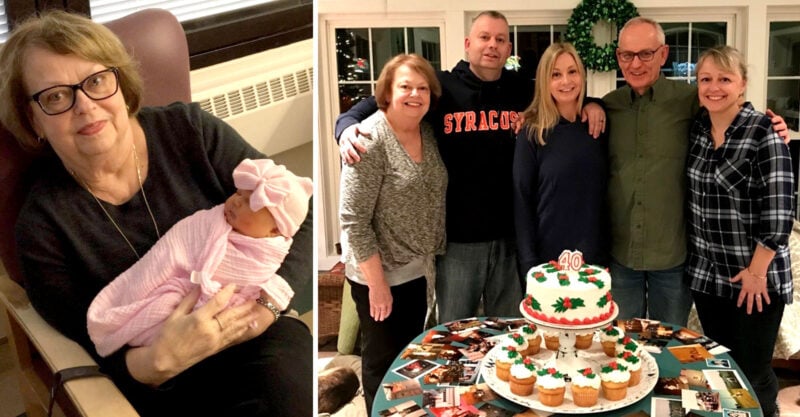 In an exclusive interview with The Defender, Carol’s son, Jeffrey Beauchine, said it was excruciating to watch his 70-year-old mother — who was healthy until she got the vaccine — die from a disease he believes the vaccine caused.

“I’ve seen a lot in my 20 years as a police officer,” Beauchine said. “I’ve seen hundreds of people shot and this affected me more than anything.”

Beauchine said Carol received her first dose of Moderna on Feb. 16, 2021, and didn’t report any complaints. After getting the second dose on March 17, Carol immediately said she “felt different.”

“On March 17, she got her second dose and immediately started having reactions to the second dose. She just had this malaise. She just didn’t feel right and said she just felt ‘off.’ She had what she described as pain and burning at the injection site — like someone was tying a hot rope around her arm. Then she explained it as this numbness setting in around the injection site.”

“We just thought it was a result of the jab working through the system,” Beauchine said. “Then the numbness spread up through her neck and down her left arm.”

The numbness altered Carol’s hearing and spread “down through her hands” until the left hand lost sensation and mobility.

“At this point, it was her entire left arm. She started to develop insomnia. She would go a couple of days at a time without sleep and then she was fatigued. This numbness continued to spread. It went down to her hip and moved to her knees, then the entire left side. You could almost bisect her body and the left side was numb and the right side was normal.”

Beauchine said Carol went to the doctors — who initially thought she had suffered a stroke — but her MRI scans were completely normal.

“Nobody could find anything wrong with her so they sent her home,” Beauchine said. “It was almost like reassurance, while at the same time I wondered why they couldn’t.”

Carol then developed tremors in her left arm.

“It was almost like her arm would start jerking involuntarily,” Beauchine said. “Then the tremors moved on to the left leg.”

“My mother began to complain that something was wrong with her brain. She said she couldn’t put thoughts together or make sense of things but she could still communicate. Over the phone, you wouldn’t see the altered version of my mom I knew for 44 years.”

Then Carol developed double vision that ultimately led to blindness, and she began to hallucinate.

“She would see herself falling out of the chair and she would physically see herself on the ground,” Beauchine said. “It was weird to understand. She developed a fear of water and would become scared she was near a body of water.”

Doctors believed Carol was suffering from anxiety because of the shot and started treating her for anxiety. Meanwhile, Carol lost the ability to walk.

“She was still at home at this time because the hospital couldn’t find anything wrong with her. She was pretty much in a wheelchair. She went from the one who takes care of everybody to my 70-year-old father taking care of her. Then it got too hard for him and during one doctor’s visit they admitted her to see if they could dive into it further.

Beauchine said doctors ran every test “under the sun,” including an MRI, but couldn’t find anything. The only things doctors noticed were the obvious mobility problems on the left side of her body and balance problems.

The doctors also said there was “something off with her cerebellum but they didn’t know what it was,” he added. Carol tried to explain to the doctors that there was something “internally” wrong with her.

“She was then released to a nursing home,” Beauchine said. “It was the first time I saw my mom really sick.”

“She was in a nursing home where all this COVID was going on and we had to stand outside the window and yell through the air conditioner hole to talk to my mom. She felt defeated and scared, and my father cared for her 18 hours a day — spoon-feeding her — until the end. It just happened so fast.”

Eventually, Carol was able to get into a skilled nursing home, but she deteriorated rapidly.

“She lost the ability to feed herself because she couldn’t get the food on her fork to put it in her mouth,” Beauchine said. “It crushed me because I could see in her eyes without us having any convo, the fear and like she was defeated.”

Beauchine said there were no more good days and his mother lost the ability to communicate.

“By mid-end of July my mom was just a complete rigid person,” he said. “Lips stopped moving. She could only get a couple of syllables out. She would almost be falling out of a wheelchair in a forward position. She couldn’t tell if she was sitting up.”

Beauchine said his mother knew from the very beginning her condition was related to the shot.

“We all knew from the very beginning it was related to the shot, but we didn’t know the future significance of how bad this would get,” Beauchine said. “People have bad reactions all the time but you get over them. She didn’t get over them.”

Beauchine said the doctors didn’t know what to do because “it was just so new.”

“I’m more content with a doctor telling me they don’t know if it’s the shot because there’s no research than the doctors who say it’s definitely not the shot,” he said. “I got more ‘I don’t knows’ than denials.”

By the end of July, Carol’s husband couldn’t wake her up at the nursing home and the family had a meeting and decided their mother needed to go back to the hospital.

“When I rounded the corner, I saw my mom and it was like she was like yelling or howling. Her eyes were completely fixed in the open position. Her mouth was stuck in the open position and she had violent tremors that wouldn’t stop. She didn’t understand what was going on. The only way I can put it is a bomb went off inside of her head.

“It was excruciating for all of us. My dad was like a deer in the headlights — a blank look I had never seen before. And I’ve seen a lot of stuff in my life with my job but this was like … a bomb went off in my mom’s head and all of her limbs were convulsing and tremoring.

“It’s like something you see out of a movie. They say with this disease you come to the cliff and it’s just a drop-off and once you drop off you’re able to physically see that dropping point — and you could see it that night.”

Doctors sent Carol to Strong Memorial in Rochester, New York, and within weeks they confirmed she had CJD.

Carol’s prognosis was fatal and the family was told she had only days left. Beauchine said a panel consisting of doctors and students who were overseeing Carol’s case were open to the fact they did not know what caused her CJD.

“People were learning and they said ‘we don’t know if this is related to the vaccine or not. We don’t know because the vaccine is new and there weren’t a lot of studies on the vaccine. We won’t know until the long-term.’”

Carol passed away on Aug. 2, 2021, from CJD — a condition she did not have prior to receiving her second dose of Moderna a few months earlier. Her doctors filed a report with the Centers for Disease Control and Prevention’s Vaccine Adverse Event Reporting System (VAERS I.D. 2180699).

VAERS is the primary government-funded system for reporting vaccine adverse vaccine reactions in the U.S. According to the CDC’s website, “CDC and [U.S. Food and Drug Administration] clinicians review reports of death to VAERS including death certificates, autopsy and medical records.”

Beauchine confirmed the family has never received any contact from the CDC regarding his mother’s death, and to his knowledge, her doctors haven’t either.

Beauchine said Carol was a relatively healthy person with no previous history of COVID. Her only underlying condition was arthritis.

“She was always taking care of other people and when the whole COVID thing broke out in the media, she wanted to stay protected so she could see her kids and grandkids,” Beauchine said. “She didn’t want to be hindered by the virus, so when the opportunity arose for her age group, she got the first dose with no complaints.”

Beauchine said he also received the COVID vaccine because it was required for his job.

“I didn’t know any of this stuff that we know now, and then you come to find out that hydroxychloroquine and ivermectin have been used off label for years, but to get the Emergency Use Authorization (EUA), you have to show there’s no treatment available to be able to give that authorization, so they killed the treatments, gave the EUA, but there’s no liability on their end.

“It’s just scary nobody knew that at the time. If somebody wants to make an informed decision, let them know what they’re up against.”

Beauchine said when he talks to people, or his mother comes up in conversation, everyone seems to know someone who had a very serious reaction to a COVID vaccine.

“I am not an anti-vaxxer. I’m not crazy or anything like that,” Beauchine said. “But if I or my family can do anything to help somebody or inform somebody or even be a statistic that could come to some sort of positive resolution in all of this, so be it.”

“Watching someone slowly walk this path and their health degrading right before your eyes from day to day over a few months is terrible. It’s awful. No one should have to go through this. We all just felt for my mom the whole time. It affected us all.”

The Defender has received numerous reports of people who died from sporadic CJD after receiving a COVID vaccine — all women who were between the ages of 60 and 70. This includes Cheryl Cohen and Jennifer Deason Sprague.

According to the latest data from VAERS, between December 14, 2020, and April 1, 2022, there were 19 reported deaths due to CJD attributed to COVID vaccines. The majority of cases occurred in the 65 to 75 age range and involved a sudden onset of symptoms.