Staggering Story of How an Ethanol Plant Poisons Nebraska Town

State officials recorded levels of neonicotinoids, a pesticide used to coat corn seed, at a staggering 427,000 parts per billion (ppb) in testing of one of the large hills of waste on the site of the ethanol plant property. 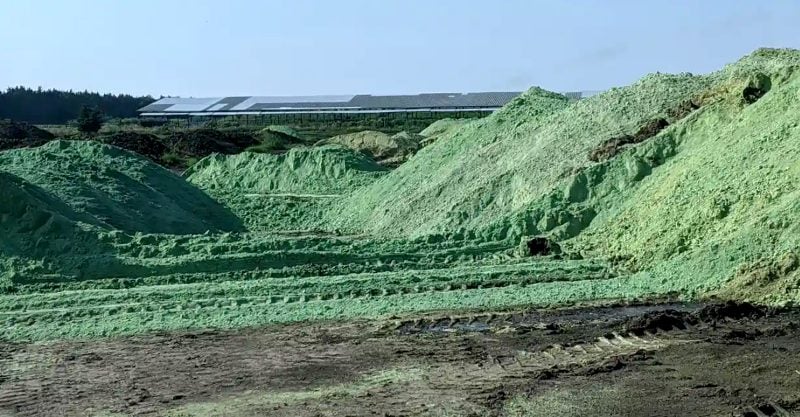 On Jan. 10, The Guardian published my story about a small rural Nebraska community that has been struggling for at least two years with contamination tied to neonicotinoid-coated corn seed. The source is an area ethanol plant that has been marketing itself as a free “recycling” location for seed companies such as Bayer, Syngenta and others who needed a place to get rid of excess supplies of these pesticide-treated seed stocks.

The result, the townspeople say, is a landscape laced with stunningly high levels of neonicotinoid residues, which they say have triggered illnesses in both humans and animals. They fear their land and water are now irreparably contaminated.

State environmental officials have recorded levels of the neonicotinoids at a staggering 427,000 parts per billion (ppb) in testing of one of the large hills of waste on the site of the ethanol plant property. That compares to regulatory benchmarks saying levels must be under 70 ppb to be considered safe.

See this page for more details and documents.

University of Nebraska academic Judy Wu-Smart has documented the concerns and evidence of the apparent impacts of the contamination on the area environment, including on bees and other wildlife in a paper she has been sharing with other academics.

The tale of the toll on the community in Mead, Nebraska, is but the latest sign that state and federal regulatory oversight of neonicotinoids needs to be strengthened, according to environmental advocates and researchers from several U.S. universities.

“They are doing a ton of harm and clearly being nefarious about it,” said Sarah Hoyle, who specializes in pesticide issues for the Xerces Society, an Oregon-based conservation organization.

The controversy over the class of insecticides known as neonicotinoids, or neonics, has been growing in recent years and has become a global conflict between the corporate behemoths that sell neonics and environmental and consumer groups who say the insecticides are responsible for extensive environmental and human health harm.

Since being introduced in the 1990s, neonicotinoids have become the world’s most widely used class of insecticides, sold in at least 120 countries to help control damaging insects and protect agricultural production. The insecticides are not only sprayed on plants but also coated on seeds. Neonicotinoids are used in producing many types of crops, including rice, cotton, corn, potatoes and soybeans. As of 2014, neonicotinoids represented more than 25% of the global pesticide market, according to researchers.

Within the class, clothianidin and imidacloprid are the most commonly used in the U.S., according to a 2019 paper published in the journal Environmental Health.

In January 2020, the U.S. Environmental Protection Agency (EPA) released a proposed interim decision for acetamiprid, clothianidin, dinotefuran, imidacloprid, and thiamethoxam, specific insecticides within the neonicotinoid class. The EPA said it was working to reduce the amount used on crops associated with “potential ecological risks,” restricting when the pesticides could be applied to blooming crops.

A growing body of scientific evidence indicates that neonicotinoids are a factor in the widespread colony collapse disorder of bees, which are essential pollinators in food production. They are also seen as at least partly to blame for an “insect apocalypse.” The insecticides have also been tied to serious defects in white-tailed deer, deepening concerns over the chemical’s potential to harm large mammals, including people.

The EU banned the outdoor use of neonics clothianidin, imidacloprid and thiamethoxam in 2018, and the UN says neonics are so hazardous that they should be “severely” restricted. But in the U.S., neonics remain widely used.