In an interview with Oracle Films, musician Eric Clapton shared details about his painful reaction to the COVID vaccine, and how he felt alienated from friends after mainstream media blasted him for speaking out. 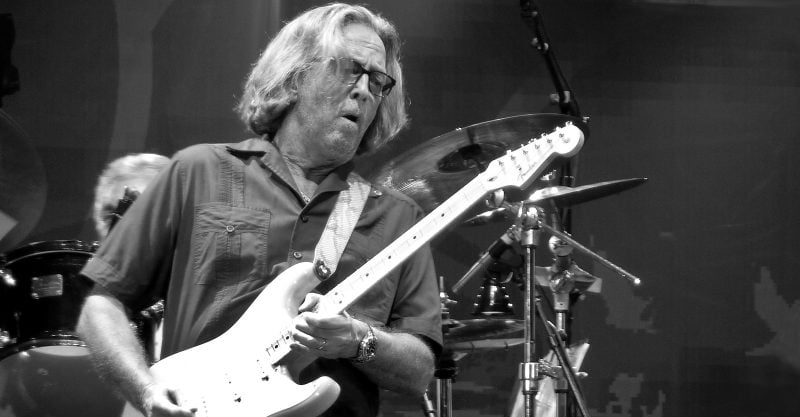 In an interview with Oracle Films, musician Eric Clapton detailed his experience suffering from a severe adverse reaction to the COVID-19 vaccine. Clapton has been blasted by mainstream media for speaking out about the vaccine and COVID lockdowns, and he said he’s lost friends over his views.

He’s even fearful of losing the love and trust of members of his own family, but believes in speaking out for what he believes in and sharing his experiences:

“I believe most of all in free speech and freedom of movement, choice of movement and life and love and kindness and with all of this exposure to the polarization of politics and the medicine and the science, I found it very difficult to be neutral because I’ve seen scorn and contempt from both sides, and I get caught in the crossfire a lot.

“… I’m talking today on behalf of people like me who may be lost, maybe need to hear someone talk about it from a human point of view without condemnation … There has to be a way to bring people together. I believe music can do that, but it’s a long way away. There’s still time, I believe, for us to come together.”

Before he received the COVID-19 vaccine, Clapton collaborated with Van Morrison on the song “Stand and Deliver,” which was released in December 2020. It takes on the U.K.’s pandemic response, which included strict lockdowns.

Analysis of scientific evidence since the start of the pandemic supports the theory that lockdowns have been ineffective in stopping the spread of the illness and have come at an exceedingly high financial and human cost. They’ve even been called the “single worst public health mistake” of the last 100 years. In the song, Clapton sings:

Clapton lost use of hands after second vaccine dose

Even though Clapton was unhappy with the government’s pandemic response, and even considered moving his family away from England, he believed he was vulnerable to COVID-19 due to his age — 76 years — and diagnosis of emphysema.

He decided to get a COVID-19 vaccine — the Oxford-AstraZeneca vaccine, which uses a chimpanzee adenovirus vector genetically engineered to express the SARS-CoV-2 spike protein. The side effects began shortly after his first dose:

“I went and had the jab … within several hours, I was shaking like a leaf and I went to bed early and I couldn’t get warm … and I thought, I’m running a fever. I was boiling hot and sweating and then I was cold, and I was out for the count for about a week.

I had been preparing for a project where I was going to be playing acoustic guitar with a couple of musicians and we were going to film it. That week knocked me out and I had to start again from scratch. I was OK, but it didn’t come off as well as I would like to because, professionally, it was a huge setback …”

When it came time to get the second dose, Clapton was hesitant, but went ahead anyway, only to experience an even more severe reaction:

“Bit by bit I realized that I probably shouldn’t have had the first jab, but then I was offered the second and I thought, well … what’s the point in stopping now. So I went and had the second, and then it got really bad. Within about a week … my hands didn’t really work.”

Eric Clapton said he had a “disastrous” health experience after receiving the AstraZeneca COVID vaccine, and the 76-year-old musician blamed propaganda for overstating the vaccine’s safety. #TheDefenderhttps://t.co/PswWLXJw3q

Clapton had previously been diagnosed with peripheral neuropathy, which is nerve damage in the arms and/or legs that causes pain, burning, numbness and pins-and-needles sensation. The condition is progressive and incurable, Clapton noted, but said his was always manageable.

“I expected it to be something that would gradually grow worse as I got older into my 80s, but always I could get some ice pack or whatever and it would be fine.” This changed after the second COVID-19 vaccine, however.

After the second COVID-19 vaccine, Clapton’s peripheral neuropathy got significantly worse, which he attributed to an assault on his immune system:

“[When I had the second jab] this ramped up from, on a scale of 10, say from three to eight or nine. Agony and chronic pain. When you know there’s nothing that will work, there’s no medication you can take that will help, it’s very, very frightening. And the worst thing is you don’t know when it’s going to wear off or when it’s going to go away.

“So that was what frightened me the most, medically, health-wise, and it still does because I have gigs to do, I have recording work to do, but I can’t touch the guitar to play … it’s not fun … and when I put it down, it’s there until I go to bed, and I take sleeping pills because I can’t sleep because of the pain. That’s not a good way to live.

“It’s not all due to the vaccine but the vaccine took my immune system and just shook it around again, and that’s still going on. Then I read a lot of the evidence that I had been reading about with people that were having adverse reactions, that was on the list … damage to the immune system.”

Judy Mikovits, Ph.D., is among those who have warned about COVID-19 vaccines leading to dysregulation in the immune system. She explained in our June 2021 interview:

“As mentioned, it’s an adenovirus vector expressing the protein. So, the HIV, the XMRV envelope, the syncytin, the HERV-W envelope and the ACE2 are already being expressed in the vector … these adenovirus vector protein-producing vaccines are grown in an aborted fetal tissue cell line, so now you’ve got human syncytin [in there]. You’ve got 8% of the human genome of another human.

“So, again, looking at the communication that has to regulate your Type I interferon response, it’s going to give you autoimmunity. In immunocompromised people, it’s going to continue to express and that will give you a live infection, and you already have your firetrucks fighting another [infection]. You can’t fight a war on three fronts.”

The U.K. maintains a “Yellow Card” reporting site to report adverse effects to vaccines and medications. From Dec. 9, 2020 to June 2, 2021, the site reported the following submissions:

This works out to an overall adverse event reporting rate of three to seven Yellow Cards per 1,000 doses administered for the Pfizer/BioNTech, AstraZeneca and Moderna COVID-19 vaccines. When asked whether he felt he was made aware of the vaccine risks beforehand, Clapton said, “Oh god no. I didn’t even know there was a yellow card report. I didn’t know there was any such thing.”

Other than saying you may be a bit sore, Clapton said, “They say it’s safe.” After the second dose, however, he told his doctor to make a Yellow Card report and got a note that would hopefully exempt him from having to receive a booster dose:

“I lost the use of my hands for about three weeks, so I thought I was in real trouble … I can’t touch anything cold or hot. I have to use these [holding up a pair of gloves], otherwise my hands will begin to burn and they’ll stay burnt all day … And that’s my experience from having had the second jab.

“I went to my doctor pretty quickly and said, you know, I can’t have any more vaccinations. This is not possible for me because I don’t know what will happen. I don’t know what will happen next, and from what I read and from what I’ve been told, there would be a booster in the autumn, and I said I have to have a document that says I’m allergic, I can’t have COVID vaccine, which I have in my backpack.”

It was about this time that Robin Monotti with Oracle Films invited Clapton to talk about his experiences, which he said was an easy decision. “It was easy to say yes because I realized that I wasn’t the only one that was suffering adverse reactions,” Clapton said.

Fear of reprisal is keeping people from speaking out

Clapton is supportive of the Great Barrington Declaration, written by infectious disease epidemiologists and public health scientists, which highlighted grave concerns over lockdown measures implemented during the pandemic and has collected more than 850,000 signatures in support.

The Declaration authors, along with a team of academics, researchers and subject matter experts, are now publishing a regular analysis of the global impact of COVID-19 restrictions, called Collateral Global. The reality is, lockdowns have caused a great deal of harm, from delays in medical treatment and disrupted education to joblessness and drug overdoses.

Clapton said what disturbs him the most about the pandemic response is coercion. NHS propaganda ads in the UK featured photos of sick, elderly people with sayings like “Look him in the eyes and tell him the risk isn’t real.” “That’s very dark, it’s victimization is what it is,” Clapton said, adding:

“The trick they got together with their propaganda was making it so you’re responsible for other people’s lives. So, I can be labeled a murderer and people would really believe that. That’s powerful. It’s very clever.”

COVID-19 anxiety syndrome has also now manifested in many, which refers to pandemic-related psychological distress that may persist long beyond the pandemic, interfering with daily life. Clapton said he suffers from this but it was worse when he was following the news. Now, he doesn’t watch television. This psychological suffering is a key control mechanism, Clapton said, referencing George Orwell’s “1984”:

“It’s so true. There’s so much sickness in our heads now. We’ve become weak. If we’re talking about freedom of speech, freedom of movement, freedom of choice with the vaccine, for instance, then the opposite of that is what we’re experiencing if you take that away.”

Clapton believes more people aren’t speaking out because of fear of reprisal if they go against the official narrative, including reprisal from their own family. While Clapton said he’s felt some level of alienation due to his views, in his case, he said, “My fear is about what will they do to my children? My fear about vaccination is what will it do to my children?”