EPA Must Halt Fracking Waste Discharges Into Gulf of Mexico

Arguing that the Inflation Reduction Act, which mandates massive offshore lease sales to oil companies, will likely accelerate offshore drilling and fracking, the Center for Biological Diversity urged the U.S. Environmental Protection Agency to prohibit discharges of fracking chemicals into the Gulf of Mexico. 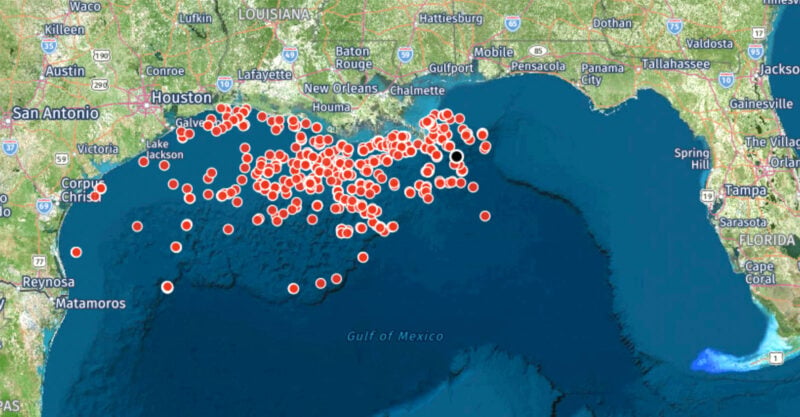 Fracked wells in the Gulf of Mexico. Image credit: Center for Biological Diversity

The Center for Biological Diversity urged the U.S. Environmental Protection Agency (EPA) Sept. 14 to prohibit discharges of fracking chemicals into the Gulf of Mexico.

The letter to the EPA notes that offshore drilling and fracking are likely to accelerate because of the recent passage of the Inflation Reduction Act, which mandates massive offshore lease sales to oil companies.

This includes the requirement to accept the highest bids received during Gulf of Mexico Lease Sale 257 and issue the lease form by Sept. 15.

The EPA is currently taking comments on the renewal of a permit that governs oil industry discharges into the Gulf. A 2021 Center for Biological Diversity analysis of federal records found that companies had dumped at least 66.3 million gallons of fracking waste into the Gulf over the previous decade.

“With offshore drilling set to surge, the Biden administration needs to stop oil and gas companies from poisoning the Gulf of Mexico with fracking waste,” said Kristin Carden, a senior scientist at the Center for Biological Diversity.

“Despite the industry’s unacceptable secrecy, we know that many fracking chemicals threaten fisheries, marine wildlife and human communities. After the Inflation Reduction Act paved the way for more drilling and fracking, it’s urgent for the EPA to stop oil companies from dumping millions of gallons of fracking waste into our coastal waters.”

Many of the chemicals that are disclosed are known to pose toxicity and cancer-causing risks to wildlife and humans. An analysis of substances present in wastewater for 14 fracks in federal waters and 15 reports from fracking in state waters in the Gulf of Mexico found chemicals like 1,2,4-trimethylbenzene that are toxic to aquatic life and may have damaging environmental effects.

The Inflation Reduction Act’s mandates for massive oil and gas leasing in the Gulf of Mexico and Alaska will worsen these harms, the letter notes.

To protect ocean ecosystems and human health, the Center for Biological Diversity has requested that the EPA prohibit the discharge of fracking-related effluents into the Gulf of Mexico entirely or until they are proven safe for aquatic life or rendered safe through adequate pre-discharge treatment.