Combining findings from more than 2,000 scientific and government studies, a report published Thursday details how hydraulic fracturing has "dire impacts on public health and the climate." 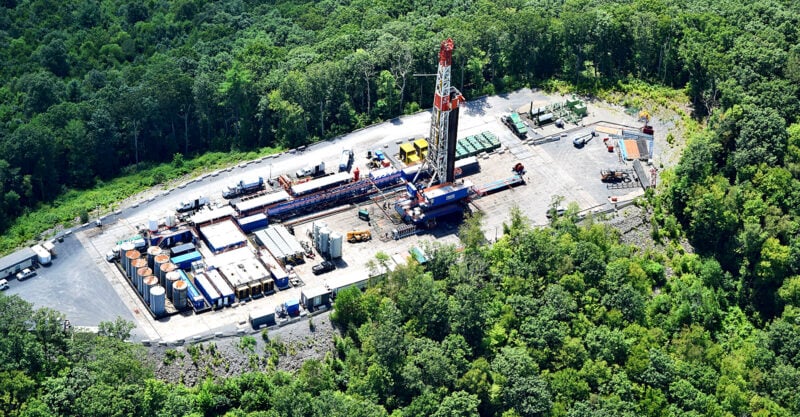 Combining findings from more than 2,000 scientific and government studies, a report published Thursday details how hydraulic fracturing has “dire impacts on public health and the climate.”

Physicians for Social Responsibility and Concerned Health Professionals of New York (CHPNY) released the eighth edition of their “Compendium of Scientific, Medical, and Media Findings Demonstrating Risks and Harms of Fracking,” a comprehensive examination of the state of the hydraulic fracturing industry and its impacts.

“The scientific evidence reveals conclusively that fracking causes widespread and severe harm to people and the climate,” Sandra Steingraber, CHPNY co-founder and compendium co-author, said in a statement.

“The compendium takes stock of all the science together, which shows that continuing and expanding fracking brings with it a grave cost.”

Our report shows that #fracking is linked to serious health harms in study after study. Risks are especially grave for pregnant mothers, infants, children, and the elderly. https://t.co/F5ocPQkPTH

The report reveals that:

According to the publication:

“In sum, the vast body of scientific studies now published on hydraulic fracturing in the peer-reviewed scientific literature confirms that the climate and public health risks from fracking are real and the range of environmental harms wide.

“Our examination uncovered no evidence that fracking can be practiced in a manner that does not threaten human health directly or without imperiling climate stability upon which human health depends.”

“People, nurses, and doctors across the United States have been pointing to harms from drilling and fracking for well over a decade,” said Barbara Gottlieb, environment and health program director at Physicians for Social Responsibility.

“Now there is clear and overwhelming scientific evidence showing that fracking makes people sick, degrades the environment, and imperils the climate.”

“From a public health perspective and a climate perspective, stopping fracking is imperative,” she stressed.

Dr. Kathleen Nolan of Physicians for Social Responsibility and Concerned Health Professionals of New York, said, “States and countries that have banned fracking are leading the way to a stable and healthy climate future, preventing poisonous fracking chemicals from causing birth defects, cancer, heart disease, asthma and pneumonia, diseases of other organs and tissues, and early death.”

“Banning fracking also prevents induced earthquakes and greatly reduces emissions of methane, carbon dioxide, toxic gases, and particulate matter into our atmosphere,” she added. “We know what must be done: Now we must do it — and do it quickly.”