The U.S. Department of Justice on Wednesday appealed Monday’s ruling by a federal judge in Florida that struck down the Biden administration’s mask mandate for public transport. Legal experts say the move could backfire if the case goes to the U.S. Supreme Court. 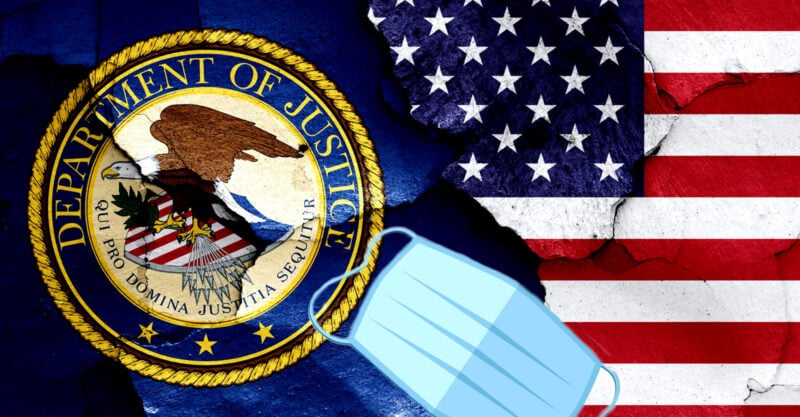 The U.S. Department of Justice (DOJ) on Wednesday appealed Monday’s ruling by a federal judge in Florida that struck down the Biden administration’s mask mandate for public transit.

The news followed a statement from the U.S. Centers for Disease Control and Prevention (CDC), issued at the DOJ’s request, recommending the continued use of masks on planes, trains and other public transportation.

The DOJ filed the appeal in the U.S. District Court Middle District of Florida, Tampa Division, and said it may ask the court to stay the judge’s injunction while the case proceeds.

For now, the Florida ruling vacating the mandate stands.

Prior to filing the appeal, the federal government sent mixed signals regarding its willingness to appeal the April 18 decision of U.S. District Judge Kathryn Kimball Mizelle in Tampa, Politico reported.

In her ruling, Judge Mizelle stated the CDC failed to justify its decision to impose the mandate and failed to follow proper rulemaking procedures for implementing it.

The nonprofit Health Freedom Defense Fund filed the lawsuit that prompted Monday’s ruling against the mandate.

The DOJ on Tuesday announced it would appeal the Florida ruling only if the CDC deemed the mandate necessary for safeguarding public health:

“The Department of Justice and the Centers for Disease Control and Prevention (CDC) disagree with the district court’s decision and will appeal, subject to CDC’s conclusion that the order remains necessary for public health.

“The Department continues to believe that the order requiring masking in the transportation corridor is a valid exercise of the authority Congress has given CDC to protect the public health. That is an important authority the Department will continue to work to preserve.

“If CDC concludes that a mandatory order remains necessary for the public’s health after that assessment, the Department of Justice will appeal the district court’s decision.”

The DOJ statement came after significant debate within the Biden administration, Politico reported:

“The Justice Department’s announcement comes after hours of deliberation, with some Biden administration officials insisting that an appeal is essential to preserve the government’s public health authorities while others argued a fight would have relatively little political benefit or practical effect for the broader Covid response.

“Detractors also expressed concerns about the fallout if the government were to lose an appeal.”

Politico characterized the DOJ statement as suggesting the agency was divided about whether to continue the mask mandate, stating the DOJ announcement “ultimately leaves next steps in the hands of the CDC, where there have been divides over how to proceed on a mandate that was already set to expire in early May.”

There is “growing consensus” among White House and public health officials that an appeal would be “impractical,” two people with knowledge of the deliberations told Politico.

President Biden, after the Florida ruling, said it’s “up to them” — meaning individuals — whether to wear masks when traveling.

White House spokesperson Jen Psaki later “clarified” Biden’s remark, stating, “The president was answering the question quite literally, which means … we are not implementing the mask mandate because of the court order.”

Psaki added, “We want to preserve that authority for the CDC to have in the future. Our focus here was seeing what power we had to preserve.”

The “growing consensus” within the White House and federal government may also be indicative of a growing push, encouraged by polling firms and advisers close to the Biden administration, to declare a political “victory” over the virus by lifting highly restrictive COVID-related measures and mandates.

Health Freedom Defense Fund, responding to the DOJ’s statement that it would appeal the decision if directed to do so by the CDC, said:

“DOJ’s statement is perplexing to say the least and sounds like it comes from health policy advocates, not government lawyers.

“The ruling by the U.S. District Court is a matter of law, not CDC preference or an assessment of ‘current health conditions.’”

The CDC on April 13, just one week before the Florida ruling, extended the federal mask mandate for transportation — but only for two weeks.

DOJ appeal could backfire if case goes to Supreme Court

Part of the Biden administration’s indecisiveness following the Florida court ruling also appears to be related to uncertainty, on its part, regarding the likelihood of success of an appeal, according to Politico:

“Officials are still worried about the fallout if the 11th Circuit Court of Appeals, which has jurisdiction over Florida, upholds the ruling. That could prove a politically embarrassing loss and set a precedent that could hamstring future public health crisis response efforts, one of the people with knowledge of the matter said.

“The appeals court is made up of a majority of judges appointed by Republican presidents, including six installed by former President Donald Trump, and it’s unclear which three of those judges would hear the legal challenge.”

According to Politico, the Biden administration’s strategy for this case will have implications for future public health battles.

Politico quoted Céline Gounder, MD, an infectious disease expert who served on Biden’s COVID advisory board during the transition and is now a senior fellow and editor-at-large for public health at the Kaiser Family Foundation and Kaiser Health News, who said:

“On the one hand, they’re going to want to preserve CDC’s powers to reimplement if there’s another crisis. On the other hand, they may think it’s too risky and that if this were to go all the way to the Supreme Court that this Supreme Court would not uphold CDC’s power to require masks.”

Legal experts, including those who criticized the Florida judge’s decision to vacate the mandates, said Wednesday — before the DOJ filed its appeal — that the Biden administration would face a “grave risk” if it appealed the ruling, The Hill reported.

What will states do?

Without a federal mask mandate for transportation, it is unclear whether state and local health authorities will ultimately opt to maintain such mandates of their own.

According to Kaiser Health News, the states, not the federal government’s CDC, have the broadest authority over public health efforts to control disease:

“Their public health agencies, or elected officials, have a range of authorities, including the ability to require masks in schools or businesses. Governors can issue stay-at-home orders during public health emergencies. And health departments routinely track outbreaks of communicable diseases and inspect restaurants for pathogens or vermin.”

States, however, don’t have authority over interstate commercial flights.

While Philadelphia, on April 11, brought back a mask mandate applicable in public indoor spaces throughout the city effective April 18, most state and local jurisdictions in the U.S. have, in recent weeks, been lifting such restrictions.

For instance, Hawaii, the last state to have a mask mandate in place, lifted it on March 26.

At least one lawsuit has already been filed challenging Philadelphia’s reinstated mask mandate.

As further indication of the move away from mask mandates by state and local governments, several public transportation systems in major U.S. cities, including Chicago and Washington, D.C., immediately lifted their mask requirements for passengers following the Florida ruling.

The lifting of the transportation mask requirement has, for many, been most closely associated with air travel, however.

Following the U.S. District Court ruling, the U.S. Transportation Security Administration announced it would not enforce a mask mandate in facilities under its purview, such as airports.

A group of 10 commercial air pilots from several of the aforementioned carriers filed a lawsuit in March against the CDC over the transportation mask mandate. Their lawsuit claims that the policy was adopted despite “countless scientific and medical studies and articles showing that face masks are totally ineffective.”

Since March, several U.K. air carriers, including British Airways, Jet2, and TUI, have made face masks optional on their flights, after the UK government lifted its remaining COVID-related restrictions. No adverse public health effects appear to have followed the elimination of the mask mandate for air travel.

Also of note, Sweden, which never mandated masks for transportation or for any indoor or outdoor spaces, has recorded fewer COVID-related deaths per million people than the U.S. – and 53 other countries, as of this writing.

Amtrak has also announced the lifting of mask requirements for its passengers.

A USA Today report following the Florida court ruling quoted passengers expressing elation at the decision — with one air traveler stating “he could breathe better.”

Videos circulated online showed elated passengers removing their masks mid-flight upon hearing the requirement was struck down in court.

Institutional media, and individuals quoted by such outlets, expressed a different view, however.

“So many people are sick of masks. But it’s not about that. It’s about who makes our public health policy. The judiciary – a 35-year-old unelected judge – or the CDC and the Department of Health and Human Services?”

There was no apparent comment about why the judge’s age is of relevance to her ruling, or about the fact that public officials in the CDC and the Department of Health and Human Services are also unelected.