In an interview with Tom Marazzo on “RFK Jr. The Defender Podcast,” Robert F. Kennedy, Jr. and Marazzo discussed how truckers overcame totalitarian-style tactics by the Canadian government, including attacks on individuals’ personal finances. 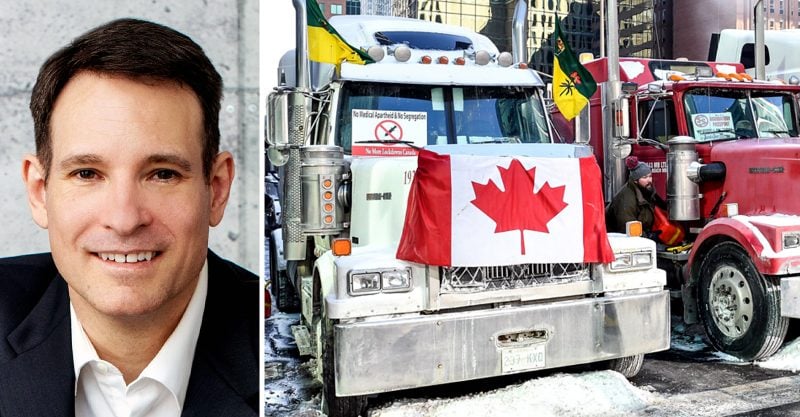 In an interview with Canadian “Freedom Convoy” leader Tom Marazzo on “RFK Jr. The Defender Podcast,” Robert F. Kennedy, Jr. and Marazzo reviewed the challenges and outcome of the truckers’ protest against COVID-19 vaccine mandates.

“I think one of the outstanding features of the event was this very, very troubling reaction by Prime Minister Justin Trudeau and the Canadian government — and parliament — to the convoy. It was clearly a peaceful demonstration — this was the principal theme of it. It was an organizing feature of the convoy from the beginning that it was about peace and love and justice and democracy.”

Marazzo confirmed the convoy’s intent was to peacefully protest government mandates, although the protesters were prepared for a subversive response.

“We were always on the lookout for what we believed to be provocateurs because we suspected there would be many groups out there that would try to pull this kind of a stunt.

“When you have thousands and thousands of people, all attending a major event like that — but one person misbehaves —  the entire story becomes about that one person… and that’s exactly what the mainstream media attacked.”

Despite the media’s skewed descriptions, Kennedy asked Marazzo if the Canadian public, including those who accepted COVID mandates, was influenced by the government response.

“The critical mistake that the government of Canada made is they used the banks — they deputized the banks against the people without any form of due process. And even the most hardened supporters of the COVID 19 mandates — when the banks started to attack people’s accounts and credit scores and close their credit cards off,  when they attacked people’s means to provide for their families, that really struck a nerve with a lot of Canadians.”

Marazzo and Kennedy discussed how the government attacked the convoy, politically and economically, in an attempt to stop its progress, including trying to financially cripple individual leaders of the protest.

“My credit card was turned off. My spouse’s credit rating was attacked and it dropped 109 points.

“The credit card that I used to pay for my child’s medication didn’t work. And because it’s on file with the pharmacy, I couldn’t even get heart medication for my child. And so this was all done without any warrants for my arrest, any charges — I wasn’t prosecuted — this was because I had the wrong thoughts.”

“Without any due process, without going to a court, without charging you for a crime — it’s really something out of the middle ages. It’s exactly the kind of thing that King George was doing, that prompted us to have a revolution in this country.”