Organizers of Sunday’s peaceful protest against COVID mandates in Brussels called off the event after police — using tear gas, water cannons and dogs — ordered them to disburse, but key speakers later in the day delivered their speeches at a restaurant. 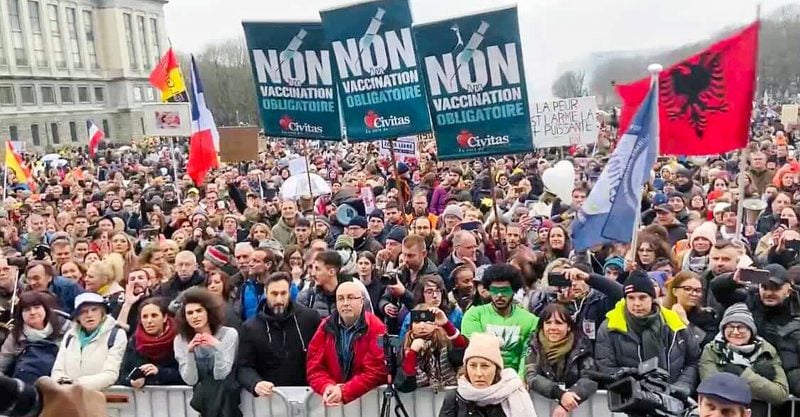 As more than 30,000 people gathered on Sunday in Washington, DC, to peacefully protest COVID vaccine mandates, a different scene unfolded in Brussels. There, organizers called off their rally after police — using tear gas, water cannons, dogs and the threat of mounted police — ordered them to disburse.

People from all over Europe assembled in Brussels, home to the EU Parliament, to demonstrate against coercive COVID countermeasures, including lockdowns, vaccine passports and vaccine mandates,

According to news reports, the crowd numbered somewhere between about 50,000 to up to 600,000, according to organizers and participants.

In the interest of public safety, organizers chose to follow police orders rather than proceed with their planned program. Unfortunately, skirmishes with police followed even after most of the crowd had disbanded.

Holland said she was sad the demonstration had to be called off but was even more upset by the images she saw of the area where the march and demonstration were supposed to be.

“These are horrific images. We are not in favor of violence. We condemn all violence. We are here for peaceful change. Children’s Health Defense has nothing to do with what has happened, and we deeply regret it and think that this is not the way toward the future, and we all as humans have the right to  peacefully assemble, to air our grievances, to exercise our free speech and we look toward both law enforcement and civic protestors to respect those rights, so we can continue to engage in them fully.”

Holland and others behind the planned peaceful protest questioned why law enforcement disbanded the demonstrators before the rally had basically begun.

One theory, they said, is that those who spoke at the morning press conference  — most of whom were to speak again at the rally — “were too threatening to powers that be.”

The people scheduled to speak at the afternoon rally regrouped later in the day and delivered their speeches at a restaurant.

In her speech, Holland said:

“We are at a crossroads. We can either follow the path to tyranny that’s before us, or we can set ourselves free. The official narrative of the global coup d’état is over.”

“We’re here today to reject the official narrative. We’re here to say no to the mandates, no to the passports, but yes to our fundamental rights, to informed consent, to bodily integrity, to parental rights, free expression of religion, free speech, free assembly, free press and the right to protest and petition the government as we were attempting to do today.”

Holland said, “We have not fully won, here or in the United States, but we can with education, advocacy and litigation.”

Catherine Austin Fitts, investment banker, publisher of the Solari Report and advisor to CHD Europe, warned of the coming “financial reset,” a plan put together by a group of central bankers working through BlackRock, a New York City-based multinational investment management corporation.

“What does it mean to you,” Fitts asked?

“It means they’re converting to a new financial system that will give complete central digital control to bankers and central bankers. Whether they call it a vaccine passport, or a digital ID, or biometric system, the result will be the same — central control.”

“We have the power to not let this happen,” Fitts said. “Do not comply with tyranny.”

Fitts described a number of ways citizens can refuse to comply, including by using cash instead of credit whenever possible and setting up alternative transactional systems, such as bartering.

Holocaust survivor Vera Sharav delivered a powerful warning, drawing parallels between what she experienced as a child growing up in Nazi-controlled Romania with what she sees happening today, around the world.

“Today’s predators are also using fear and propaganda to maintain a state of anxiety and helplessness. The objective — then and now — is identical — to condition people to become obedient and to follow directives without question.

“The global assault on our freedoms and our right to self-determination is facilitated by the weaponization of medicine. Then and now, the medical establishment has provided a veneer of legitimacy to mass medical murder.”

“If we are to survive as free human beings, we must speak out against discrimination. We must not ever be silent again — not today, not tomorrow, not ever,” she explained.

Read the transcript of Sharav’s speech in English and Hebrew.