Is Cargill the ‘Most Evil Corporation in the World?’

U.S. agricultural giant Cargill’s sales jumped 23% in 2022 as food prices soared for consumers. In this episode of “The Most Censored News,” news commentator Lee Camp exposes the corruption that has defined Cargill’s 150-year history. 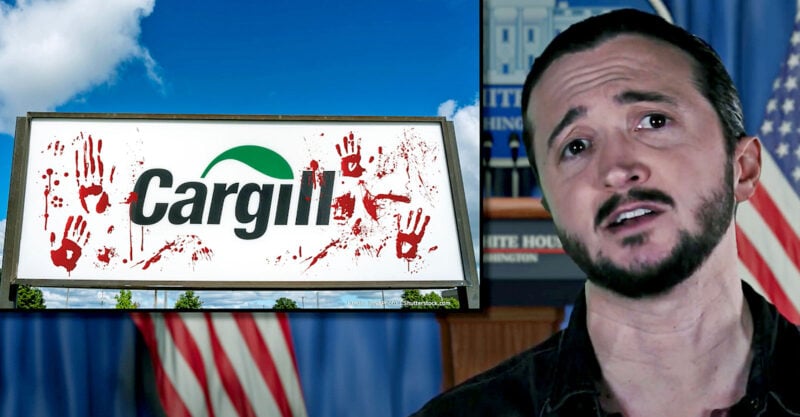 In 2022 as food prices soared for consumers across the world, U.S. agricultural giant Cargill’s sales jumped a record 23% to $165 billion.

According to comedian and news commentator Lee Camp, profiteering from a crisis is nothing new for Cargill.

In a recent episode of “The Most Censored News,” Camp exposes Cargill’s 150-year history of corruption. He calls out the privately owned corporation as a “mafia” whose secrecy and monopoly control of the industry let it profit with impunity — despite the negative effect the company has on people and the environment.

The Cargill-MacMillan family, 14 of whom are billionaires, still controls 88% of the corporation today. As a private corporation — the biggest in the U.S. — Cargill largely decides what it shares with the public about the business, so it’s seldom held responsible for the devastation it causes.

In recent years, Cargill has been linked to the use of slave labor on the Ivory Coast and Uzbekistan, union busting in the U.S., land grabbing in Colombia, deforestation in Brazil, tax evasion in the U.K. and the proliferation of factory farms known for animal cruelty and environmental destruction in the U.S.

Camp explains how Cargill grew from a grain storage company in 1865 to a global agricultural behemoth that controls much of the global food system by consistently deploying the same strategy: buying up controlling interests in every aspect of the farm-to-table process and manipulating the commodities and futures market.

Commodity futures trading guaranteed that Cargill could also profit by exacerbating crises from the Great Depression and the Dust Bowl to the 2007 food crisis, which sent 150 million people into poverty.

“For Cargill, the [2007] global food crisis was just another opportunity to generate bigger profits as growing numbers of the poor slid into malnutrition,” said United Nations Special Rapporteur on the Right to Food Olivier De Schutter, quoted in the video.

“As you can see, Cargill is truly horrific,” Camp said. “They monopolize much of our food system. They profiteer during the worst of times, and they commit a slew of other crimes against humanity and the environment.”