Oxitec this week said its first study of genetically engineered mosquitoes in the U.S. produced “positive” results, but critics said the experiment so far hasn’t stemmed the spread of mosquito-borne illness. 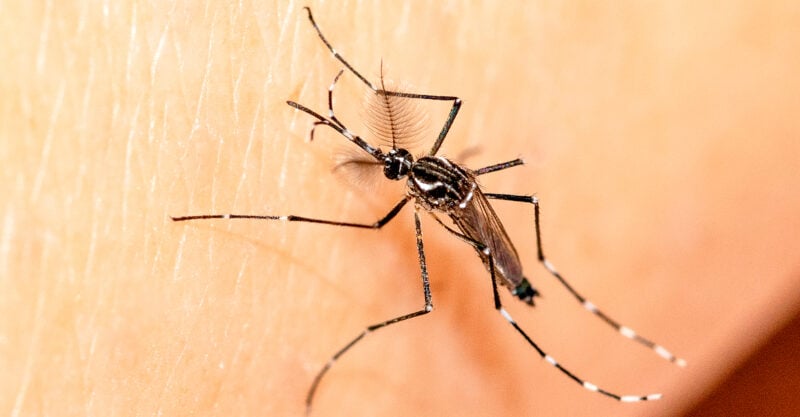 Oxitec this week announced results of the first open-air study of genetically engineered mosquitoes in the U.S.

The U.K.-based firm described the results as “positive,” but said, “Larger tests are still needed to determine whether the insects can achieve the ultimate goal of suppressing a wild population of potentially virus-carrying mosquitoes.”

The company’s self-reported results are not yet independently confirmed or peer-reviewed.

Oxitec, the recipient of a grant from the Bill & Melinda Gates Foundation (BMGF) for “self-limited mosquito field trials,” in April 2021 launched its pilot project in the Florida Keys.

The company completed the first stage of the study with the release over seven months of nearly 5 million engineered Aedes aegypti mosquitoes.

The pilot study was conducted under an experimental use permit issued by the U.S. Environmental Protection Agency (EPA). It was the first to be approved in the U.S., though the company has since received a permit to conduct a similar experiment in California.

Reporting this week on Oxitec’s announcement about its Florida results, Nature stated:

“Wild A. aegypti mosquitoes can carry viruses such as chikungunya, dengue, Zika and yellow fever, so scientists have sought ways to reduce their populations. Oxitec’s engineered males carry a gene that is lethal to female offspring.

“If all goes to plan, when released into the environment, the engineered males should mate with wild females, and their female offspring will die before they can reproduce. Male offspring will carry the gene and pass it on to half of their progeny. As each generation mates, more females die, and the A. aegypti population should dwindle.”

Oxitec’s pilot project in the Florida Keys involves releasing up to 1 billion OX5034 mosquitoes — the first genetically modified (GM) mosquito approved for release in the U.S — in Monroe County over a two-year period.

Oxitec said the mosquitoes have a “self-limiting” gene that makes the females dependent on the antibiotic tetracycline. Without the drug, they will die.

Mosquitoes require water to mature from an egg to an adult. By adding water to the boxes the mosquitoes are deployed in, both GM males and GM females will hatch.

However, with no tetracycline present in the box, the GM females are expected to die in early larval stages.

The male mosquitoes will survive and carry the gene. When they leave the boxes, according to Oxitec, the insects will fly away to mate with wild females to pass the gene to the next wild generation.

In an April 6 webinar about the Florida pilot study, Oxitec claimed the first stage of the experiment was a success.

Oxitec’s researchers collected more than 22,000 eggs from traps set as part of the pilot study, Nature reported. They found the males that hatched from the eggs typically traveled within a one-hectare area around the release box.

This represents the same range over which wild A. aegypti mosquitoes fly.

Oxitec reported all females that inherited the lethal gene died before reaching adulthood, and said researchers could determine this because mosquitoes carrying the lethal gene fluoresce under certain light.

According to Nature, however, reducing A. aegypti populations won’t reduce the need for anti-mosquito pesticides, at least in the Florida Keys, as this specific mosquito type represents only 4% of the local population.

Other mosquito types, such as the black salt marsh mosquito (Aeges taeniorhynchus), described as “more of a nuisance than a disease vector,” have much larger populations in the region.

“The pilot study was not intended to determine how well the method suppresses the wild population.”

Oxitec said it plans to gather this additional data in an extension of the Florida Keys study, which requires approval from state regulators.

Thomas Scott, an entomologist at the University of California, Davis, expressed reservations about any results Oxitec’s expanded studies would provide.

Scott told Nature, “[t]here’s not enough Aedes-transmitted viral infection in the Florida Keys,” or anywhere in the continental United States, to conduct a study that would determine whether Oxitec’s GM mosquitoes actually reduce the transmission of viruses.

This would require an “enormously expensive” clinical trial, he said.

Scott said disease outbreaks can occur even when A. aegypti populations are low. It’s “just not that simple.” he said.

Critics warned the promised benefits and potential negative consequences of the project — representing the largest-ever release of GM insects in the world — had not been sufficiently studied.

Oxitec in 2016 released billions of lab-grown mosquitoes in Brazil with the intent to combat the spread of Zika and other viruses.

However, according to an independent peer-reviewed study from Yale University, the continual releases of the GM mosquitoes over a two-year period failed to reduce populations of A. aegypti mosquitoes.

The Yale study also found the GM mosquitoes bred with local Aedes aegypti, resulting in the circulation of hybrid mosquitoes in the wild that could be more aggressive, more difficult to eradicate and that could increase the spread of mosquito-borne disease.

The mosquitoes released in 2016 in Brazil and other locations, including the Cayman Islands, were Oxitec’s OX513A version. The company released a different version, OX5034, in Florida.

The Yale study examining the release of OX513A in Brazil confirms some of the GM mosquitoes’ offspring — which were supposed to die and not pass new genes to the wild — survived to adulthood and reproduced with their native counterparts.

According to the study, 10% to 60% of the native mosquitoes contained genes from Oxitec.

The study’s authors concluded they did not know what impact these mixed mosquitoes have on disease control or transmission but said their findings underscore the importance of monitoring the genetics of the insects.

“The claim was that genes from the release strain would not get into the general population because offspring would die,” Jeffrey Powell, professor of ecology and evolutionary biology at Yale University and senior author of the study, said in a statement. “That obviously was not what happened.”

Powell added there is no known health risk to humans from these hybrids. However, “it is the unanticipated outcome that is concerning,” said Powell.

Oxitec publicly disagreed with the findings and responded on the journal’s website, telling Gizmodo that Yale’s study included “numerous false, speculative and unsubstantiated claims and statements about Oxitec’s mosquito technology.”

Oxitec’s reassurances did not assuage the fears of environmentalists and Florida residents who expressed concerns prior to the start of the Florida pilot study.

Environmental organization Friends of the Earth described the Florida Keys pilot study as a “live experiment,” noting concerns arising from the Yale study that the GM mosquitoes could reproduce with their wild counterparts.

Billions of GM mosquitoes set to be released in California

Oxitec in August 2021 received an experimental use permit from the EPA to release mosquitoes at a second study site spanning several California counties, and is constructing a research and development facility in California.

Grassroots groups concerned about the proposed California project said there are zero local cases of diseases transmitted by A. aegypti in California — and very few nationally — and no studies on the ability of GM mosquitoes to reduce the transmission of disease.

The groups also accused Oxitec of “corrupt, backdoor political lobbying” to receive EPA approvals, claiming the company “has repeatedly lied to the public [and] refused to produce information requested by the public and independent experts,” has a “concerning history of misrepresentation or failure,” and made “purposeful efforts to cover up those issues and attack … researchers who publish unfavorable findings.”

The groups also claimed a solution to mosquito-borne viruses already exists: the Wolbachia-infected mosquito, “a non-GMO biopesticide mosquito,” which has “a proven record of success.”

Other environmentalists described Oxitec’s pilot studies as a means for the firm to maximize profits, instead of an effort to eradicate mosquito-borne disease.

Oxitec conducted GM mosquito trials in some regions of India, where GM mosquitoes were released in an attempt to control dengue and the chikungunya virus.

Subramanian Swamy, a member of the Indian parliament with the country’s ruling right-wing Bharatiya Janata Party, in 2018 accused Bill Gates of “making Indians into guinea pigs,” citing the after-effects of the release of GM mosquitoes in Brazil.

The BMGF reportedly is heavily involved in the Indian trials.The involvement of the BMGF in the realm of mosquito-borne illnesses has gone as far as to propose, in 2017, alongside the Johns Hopkins Center for Communication Programs, the development of a mosquito emoji, to be “used for public health campaigns.”