Critics of the deal, announced Wednesday, say it would harm workers, consumers and U.S. democracy. 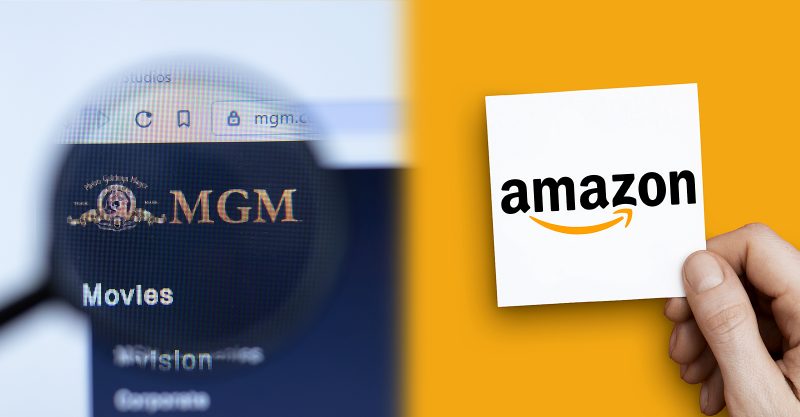 Progressive opponents of corporate consolidation are pushing the Biden administration to intervene after Amazon announced Wednesday that it has agreed to acquire the Hollywood film and television studio MGM for nearly $8.5 billion, a deal that critics denounced as harmful to workers, consumers and U.S. democracy.

“In announcing plans to buy MGM, Jeff Bezos placed a big softball on a tee for the Biden administration to knock over the fence,” Barry Lynn, executive director of Open Markets Institute, said in a statement. “It should be immediately blocked.”

As the Wall Street Journal reported, Amazon’s purchase of MGM will net the e-commerce behemoth “a library of over 4,000 films, including iconic franchises such as ‘James Bond’ and ‘Rocky,’ and classics such as ‘The Silence of the Lambs,’ ‘Raging Bull,’ and ’12 Angry Men.'”

“The TV catalog includes critically acclaimed shows such as ‘The Handmaid’s Tale,’ ‘Fargo’ and ‘Vikings,'” the newspaper noted.

Made public just days after AT&T announced a $43 billion agreement to combine its content arm WarnerMedia with Discovery, Amazon’s purchase of MGM, according to the Financial Times, “propel[s] media dealmaking so far this year to its highest level since the turn of the century with more than $240 billion worth of transactions announced.”

The new acquisition prompted fresh calls for congressional action to break up Amazon, which in recent years has become what one observer described as “a sprawling array of loosely related businesses under one roof.”

“Amazon should be broken apart from the warehouses,” Zephyr Teachout, associate professor of law at Fordham University, tweeted Wednesday. “This MGM nonsense is exactly the wrong direction. Stop the monopoly madness.”

Rep. David Cicilline (D-R.I.), chair of the House Antitrust Subcommittee, argued that Amazon’s planned takeover of MGM “reinforces what we already know — they are laser-focused on expanding and entrenching their monopoly power.”

Another day. Another mega merger. Amazon’s proposed purchase of MGM reinforces what we already know — they are laser-focused on expanding and entrenching their monopoly power. That’s bad for workers, consumers, and small businesses.

News of Amazon’s move to buy up MGM came hours after Washington, D.C. Attorney General Karl Racine filed suit against the corporate giant on Tuesday for “illegally abusing and maintaining its monopoly power by controlling prices across the online retail market.”

“Amazon has used its dominant position in the online retail market to win at all costs,” Racine said in a statement. “It maximizes its profits at the expense of third-party sellers and consumers, while harming competition, stifling innovation and illegally tilting the playing field in its favor.”

It’s unclear how regulators in the Biden administration will respond to Amazon’s acquisition of MGM, the tech giant’s largest-ever media purchase. Critically, President Joe Biden has yet to nominate an official to lead the Justice Department’s Antitrust Division — and progressives have raised alarm at some of the candidates floated for the key post thus far.

In his statement on Wednesday, Lynn of the Open Markets Institute said that the Amazon-MGM deal “underscores the need for the Biden administration to use its appointment of a head of the Antitrust Division within the Department of Justice and a new chair for the Federal Trade Commission to demonstrate that it takes America’s severe and worsening monopoly crisis seriously.”

“This deal is bad for anyone who watches movies in theaters or streams movies and other shows online,” said Lynn. “It is bad for the people who write, film, edit, produce and act in movies. It is bad for workers. And it is bad for American democracy.