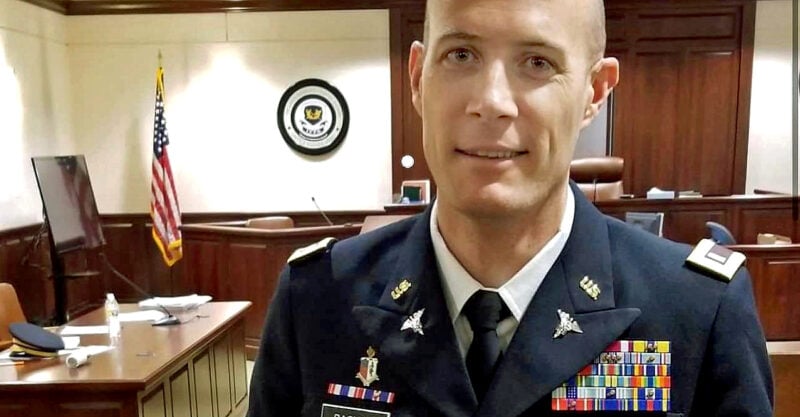 1st Lt. Mark Bashaw of Maryland, who in April was court-martialed for his refusal to comply with COVID-19 testing and masking requirements, was convicted but will not be punished.

As previously reported by The Defender, the U.S. Army charged Bashaw, under the Article 92, Failure to Obey an Order, with: failure to take a medical test, failure to wear a mask and failure to leave the workplace for telework.

About 30 spectators attended the hearing, which was open to the public.

Bashaw plead not guilty to the charges (a telework work charge was dropped at the hearing). The Army recommended formal reprimand and $25,000 in forfeiture of pay.

Judge Robert Cohen found Bashaw guilty of the two charges but recommended no additional punishment beyond the conviction. Judge Cohen commented on Bashaw’s exemplary 16 years of meritorious service during sentencing.

“Receiving no punishment at a court-martial is not without precedent,” installation spokesperson Amburr Reese told Army Times.

Because Bashaw is not facing punishment, the flag on his records will be removed and he is now eligible to be promoted to the rank of Captain, which was withheld in November 2021.

Bashaw disagreed with the judge’s determination but respected the decision. Bashaw also said he understood he can appeal the ruling.

He also explained his reasons for challenging what he thought to be an unlawful order, stating he relied on faith.

Are DOD mandates for EUA products and tests lawful?

Judge Cohen determined the Army’s orders to wear an Emergency Use Authorization (EUA) mask and to take an EUA test were lawful.

However, according to the U.S. Food and Drug Administration (FDA), EUA products and tests are voluntary, based on an investigational or experimental status, and lack liability and consumer protections.

In Bashaw’s testimony and in his role as an army public health officer, he was clear in his statements that EUA masks, tests and vaccines for COVID-19 have serious risks, including death.

Bashaw said his attempts since 2020 to clarify the risks of vaccines and benefits of prophylactic treatments in the Risk Communication Strategy at the Army Public Health Center were ignored and dismissed.

He expressed his frustration with unanswered questions about the safety and efficacy of masking, testing and mRNA vaccines.

The DMED data indicate a 300% to 1000% increase in cases among service members of cancer, myocarditis, pericarditis, and neurological conditions in 2021 compared to the five years prior to the COVID-19 vaccine rollout.

Bashaw emphasized the risks of these EUA products and tests are the full burden of the consenting individual, without liability for the manufacturers or government.

Prior to the court-martial, Bashaw exercised his option to address his grievances with the company commander’s order to take a COVID-19 test by initiating a complaint that was dismissed by the chain of command.

Instead of investigating if the military order was in conflict with a voluntary EUA COVID-19 test, the commander doubled down by restricting Bashaw from the base, suspending his security clearance, flagging his military record and denying him security access to all Army Public Health Center facilities.

Bashaw also filed complaints with the inspector general at the Department of Army, the U.S. Army Communications-Electronics Command, the U.S. Army Medical Command and the Equal Employment Opportunity Commission.

In Bashaw’s case, the Army’s investigation and complaint processes did not determine if the DOD was violating the clear decision of Doe v Rumsfeld. Bashaw was convicted for refusing EUA COVID-19 products.

Notably, Bashaw, like thousands of other service members, has been waiting months for approval of his religious accommodation request to exempt him from the COVID-19 vaccine, but vaccine refusal was not one of the charges in this court-martial.

Service members pending court-martial and/or involuntary separation need a court case to clarify the lawfulness of a DOD order mandating EUA products for COVID-19, or for Congress to explicitly prohibit through legislation the DOD’s COVID-19 EUA product mandates.