Two U.S. senators on Tuesday — the day after Dr. Anthony Fauci announced plans to leave his government posts in December — formally requested the National Institutes of Health and the U.S. Department of Health and Human Services preserve all documents and communications related to Fauci. 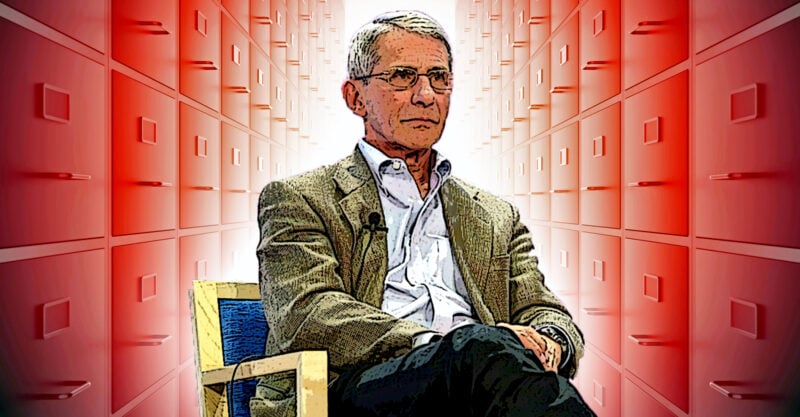 Two U.S. senators on Tuesday — the day after Dr. Anthony Fauci announced plans to leave his government posts in December — formally requested the National Institutes of Health (NIH) and the U.S. Department of Health and Human Services (HHS) preserve all documents and communications related to Fauci.

Fauci on Monday said he will retire as director of the National Institute of Allergy and Infectious Diseases (NIAID) and as chief medical adviser to President Joe Biden in December to pursue “the next chapter” of his career.

In a letter to HHS Secretary Xavier Becerra, Sen. Roger Marshall (R-Kan.) demanded Becerra “immediately confirm” that HHS is preserving all records related to Fauci and  Dr. Francis Collins, who was director of the NIH from August 2009 to December 2021.

“This request applies to all documents, records, memoranda, research, correspondence, or other communication or any portion thereof relevant to any involvement of Dr. Fauci or Dr. Collins,” the letter stated.

Sen. Rand Paul (R-Ky.), in a letter to Lawrence Tabak, D.D.S., Ph.D., acting director of the NIH, asked Tabak to “ensure the preservation of all documents and communications within Dr. Fauci’s possession related to his tenure at the National Institutes of Health (NIH).”

Marshall stressed that it is “imperative” that all HHS workers are made aware of their “legal responsibilities to collect, retain, and preserve all documents, communications, and other records in accordance with federal law.”

He also reminded Tabak of his obligation, as the head of HHS, to ensure the preservation of all records and that any employee “who conceals, destroys, or attempts to conceal or destroy a federal record may be subject to fine and imprisonment for up to three years.”

Marshall pointed out that HHS previously refused to provide information to Congress:

“HHS and component agencies, including NIH in particular, continue to obstruct numerous congressional investigations through refusal to provide responsive information.

“In addition to withholding information from Congress, private parties note that NIH refuses to comply with Freedom of Information Act (FOIA) requests until forced to do so by court order.”

Marshall went on to list “recent egregious examples” of NIH’s failure to meet record-keeping requirements and said that “even one” such example “should instigate immediate oversight action by HHS.”

Paul, in his letter to Tabak, also emphasized the need to preserve NIH documents for investigation purposes.

“This information is critical to ensure that Congress has access to information necessary to conduct proper oversight regarding events that took place during Dr. Fauci’s tenure with the agency.

“Specifically, I request you preserve all records, e-mail, electronic documents, and data created by or shared with Dr. Fauci during his tenure at NIH that relate to COVID-19 including, but not limited to, NIAID-funded coronavirus research.”

In an email today, Paul told The Defender:

“Dr. Fauci misled the American people on public health guidance throughout the pandemic, lied to Congress under oath, and funneled tax dollars to fund dangerous research in communist China.

“The American people deserve transparency and accountability from the NIH regarding the COVID-19 pandemic regardless of Dr. Fauci’s future employment plans.”

On Monday, Paul tweeted, “Fauci’s resignation will not prevent a full-throated investigation into the origins of the pandemic. He will be asked to testify under oath regarding any discussions he participated in concerning the lab leak.”

Fauci’s resignation will not prevent a full-throated investigation into the origins of the pandemic. He will be asked to testify under oath regarding any discussions he participated in concerning the lab leak.

For more than a year, Paul has advocated for a thorough investigation into the origins of COVID-19 and pushed for a criminal investigation of Fauci, whose NIAID research at the Wuhan Institute of Virology in China Paul suggested may have been involved in creating the virus.

Following up on a threat he made in mid-July of 2021, Rand sent an official criminal referral on Fauci to the U.S. Department of Justice on July 26, 2021.

Paul asked Attorney General Merrick Garland to investigate Fauci for allegedly lying to Congress when he said the NIH “has not ever and does not now fund gain-of-function research in the Wuhan Institute of Virology.”

The week before he sent the official criminal referral, Paul asked Fauci if he wanted to retract the statement he made to Congress during a May 11 hearing. Paul said, “Dr. Fauci, knowing that it is a crime to lie to Congress, do you wish to retract your statement of May 11, where you claimed the NIH never funded gain-of-function research and move on?”

Fauci replied he would not retract the statement and was adamant he never lied before Congress.

However, Fox News commentator Tucker Carlson said on June 2, 2021, that evidence showed Fauci was “implicated in the very pandemic he had been charged with fighting.”

The emails, which date back to the early winter of 2020, show Fauci was worried the public would think COVID-19 originated at the Wuhan lab. Why?

The emails showed Fauci and other top virologists shared an article from ZeroHedge suggesting COVID-19 was a man-made bioweapon. Despite it being a “plausible explanation,” said Carlson, ZeroHedge was banned from social media.

NIAID has, for years, provided grants to the EcoHealth Alliance and others to conduct gain-of-function research on coronaviruses, as The Defender previously reported.

In March 2021, the Wuhan lab deleted mentions of its collaboration with the NIAID/NIH and other American research partners from its website. It also deleted descriptions of gain-of-function experiments on the SARS virus, according to Dr. Joseph Mercola.

“The NIH/NIAID has funded GOF [gain-of-function] research to the tune of at least $41.7 million,” Mercola said. “Up until 2014, this research was conducted by Ralph Baric at the University of North Carolina.”

After 2014, when federal funding of gain-of-function research was banned, the research was funneled to the Wuhan lab via the EcoHealth Alliance.

“In August 2020, the NIAID announced a five-year, $82-million investment in a new global network of Centers for Research in Emerging Infectious Diseases that will conduct GOF experiments to ‘determine what genetic or other changes make [animal] pathogens capable of infecting humans.’”