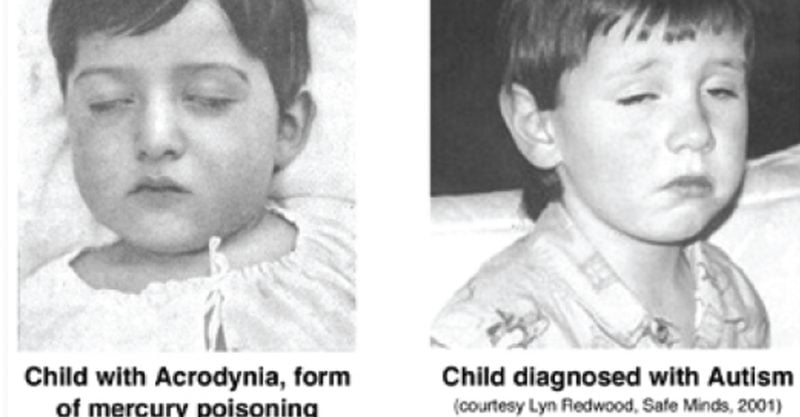 Infantile acrodynia, also called Pink Disease, was a disorder that was prevalent in the first half of the 20th century that occurred in infants and young children. According to the research literature, the earliest symptoms were emotional in nature where a lively baby becomes increasingly apathetic. In reading these early descriptions of infants and young children diagnosed with Pink Disease there are numerous overlaps between the acrodynia and autism. These include: depression, apathy, fretfulness, loss of appetite, social withdrawal, photophobia sweating, hypotonia, misery, slurring or loss of speech, and insomnia. Hand banging, rocking, parathesias in the extremities, occasional tremor, convulsions and gastrointestinal disturbances were also reported. The cause of infantile acrodynia evaded the medical community until 1945 when 12 of 14 children diagnosed with Pink Disease were found to have elevated mercury levels. The culprit was recognized as infant teething powders that contained calomel (mercurious chloride). Following the removal of calomel from teething powders in 1954 the disease disappeared. Even though teething powders that contained mercury were widely used at the time, only about 1 out of every 500 children exposed developed the disorder which was consider to be a hypersensitivity to mercury.

Recently, the overlap between the symptoms of acrodynia and autism were recognized by Australian researchers Shandley and Austin. If acrodynia was a genetic susceptibility to mercury toxicity, they wondered if there might be a higher prevalence of autism in descendants with a known hypersensitivity to mercury, survivors of acrodynia. They were able to locate over 500 individuals who had previously been diagnosed with acrodynia who complete a survey of health outcomes in their descendants. The results found a prevalence of autism among grandchildren of acrodynia survivors to be 1 in 25 which was significantly higher that the comparative population rate at the time of 1 in 160.

Acrodynia, a form of mercury poisoning in childhood, and its similarities to autism and other neurological and learning disorders of children.
1. Visual comparison: autism and acrodynia
2. Detailed description of acrodynia symptoms
3. Case report of acrodynia survivor

Pink disease (infantile acrodynia) was especially prevalent in the first half of the 20th century. Primarily attributed to exposure to mercury (Hg) commonly found in teething powders, the condition was developed by approximately 1 in 500 exposed children. The differential risk factor was identified as an idiosyncratic sensitivity to Hg. Autism spectrum disorders (ASD) have also been postulated to be produced by Hg. Analogous to the pink disease experience, Hg exposure is widespread yet only a fraction of exposed children develop an ASD, suggesting sensitivity to Hg may also be present in children with an ASD.

Investigating Pink Disease Down Under Highlights its Many Similarities to Autism

Pink Disease ravaged children in Europe, North America and Australia in the first half of the
20th Century. Many did not survive. The name comes from the fact that many children developed raw, peeling hands and feet. Other symptoms included social withdrawal, lack of eye contact, loss of language, repetitive and self-injurious behaviors, body-rocking, toe-walking, sensitivity to light, noise and touch, low muscle tone, immune disorders and respiratory problems.