Peanut Allergy Epidemic: What’s Causing It and How to Stop It 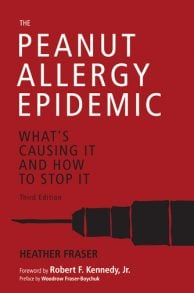 In the early 1990s, tens of thousands of children with severe peanut and food allergies arrived for kindergarten at schools in Canada, the United Kingdom, Australia, and the United States.

The phenomenon of a life-threatening allergy in kids in only these countries occurred simultaneously, without warning, and it quickly intensified. The number of peanut allergic children in the United States alone went from virtually none to about two million in just twenty years. As these children have aged, the combined number of American adults and children allergic to peanuts has grown to a total of four million.

How and why has this epidemic occurred? In The Peanut Allergy Epidemic, Heather Fraser explains:

Fraser also highlights alternative medicines and explores issues of vaccine safety and other food allergies, making this fully updated second edition a must-read for every parent, teacher, and health professional.