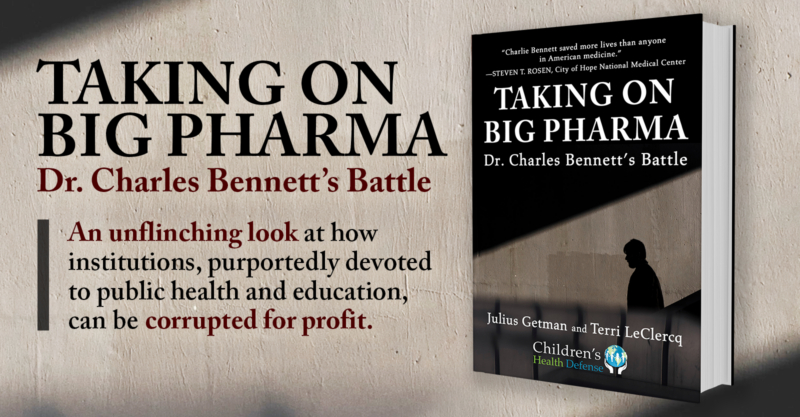 In “Taking On Big Pharma: Dr. Charles Bennett’s Battle,” retired law professor Julius Getman and his wife, Terri LeClercq, a retired rhetoric professor, unravel the unethical use of the False Claims Act to neutralize a thorn in Big Pharma’s side.

Washington, D.C. — Larger-than-life, creative and fiercely ambitious, Dr. Charlie Bennett has a long history of revealing dangerous side effects of bestselling medicines. Naturally, Big Pharma would want to take him down; that was to be expected. The surprise was how eager university administrators and state’s attorneys were to help.

Alarmed by Bennett’s research, Dr. Otis Brawley, an FDA committee advisor at the time said, “I am concerned that this compound is a ‘tumor fertilizer.’ … What data do you have to assure me that this is not Miracle-Gro for cancer?” He didn’t get a satisfactory response.

Linda Martin, Ph.D. — an advocate for safer use of fluoroquinolone antibiotics after surviving a devastating reaction to Levaquin, praises Bennett: “Charlie has no idea of how many people think of him as their hero. He was their voice. ‘Floxed patients’ often feel lonely and abandoned. Charlie let them know that they had important support.”

Bennett’s work also created enemies: An Amgen executive told him, “If you publish this, I will destroy you.”

In a coordinated, well-funded campaign to discredit Bennett and refute his work, powerful interests from Big Pharma, academia and law enforcement went after him. Besieged by lawsuits, accused of mishandling government grant money and violating the False Claims Act (also known as the “Whistleblower Act”), he was eventually forced to leave his academic position — taken from pharma superstar to disgrace and disrepute in the blink of an eye.

“Taking On Big Pharma” explores Bennett’s achievements and evaluates the charges against him, while exposing the unsettling relationship between the pharmaceutical industry and academia. The result of more than five years of research and hundreds of hours of interviews with scientists, academicians and federal prosecutors, this is an unflinching look at how institutions, purportedly devoted to public health and education, can be corrupted for profit — whether from drug sales or research grants.

Children’s Health Defense is a 501(c)(3) nonprofit organization. Our mission is to end childhood health epidemics by working aggressively to eliminate harmful exposures, hold those responsible accountable and establish safeguards to prevent future harm. For more information or to donate to CHD, visit ChildrensHealthDefense.org.