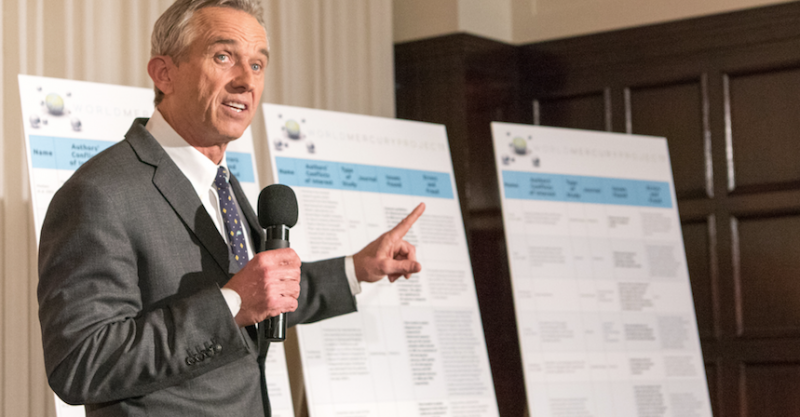 WASHINGTON, Feb. 15, 2017 – Robert F. Kennedy Jr., Chairman of the World Mercury Project, announced a $100,000 challenge today aimed at putting an end to including mercury, a dangerous neurotoxin found to be 100 times more poisonous than lead, in vaccines administered in the U.S and globally.

Thimerosal, a mercury-containing preservative, is still in 48 million U.S. flu vaccines (2016-2017 flu season), tetanus toxoid, meningococcal vaccines and, in massive doses, in the pediatric vaccines given to 100 million children across the developing world. A Centers for Disease Control (CDC) review published last month found that the ethylmercury in thimerosal is as profoundly neurotoxic as the heavily regulated methylmercury in fish.

“On one hand, the government is telling pregnant women which mercury-laced fish to avoid so that they don’t harm their fetuses, and on the other, the CDC supports injecting mercury-containing vaccines into pregnant women, infants and children,” said Kennedy, who spent decades litigating polluters who dumped mercury into water systems. “This defies all logic and common sense.”

Kennedy stressed that, contrary to countless claims that he is “anti-vaccine” and wishes to end the country’s vaccination program; nothing could be further from the truth. He vaccinated all of his children and just wants safe vaccines.

Actor Robert De Niro, the parent of a vaccine-injured son, who also spoke at the press conference, is a supporter of CHD whose vision is a world where mercury is no longer a threat to the health of our planet and people. The group focuses on making sound science the driver of public policy.

Toward that end, Kennedy announced the “World Mercury Project’s Challenge” to American journalists and others “who have been assuring the public about the safety of mercury in vaccines.”

Kennedy explained that CHD will pay $100,000 to the first journalist, or other individual, who can find a peer-reviewed scientific study demonstrating that thimerosal is safe in the amounts contained in vaccines currently being administered to American children and pregnant women. Kennedy believes that even “a meager effort at homework” will expose that contention as unsupported by science. He says the science is unequivocal that mercury is a serious health hazard and exposure is linked to many different diseases and conditions (Autism, ADHD, Alzheimer’s, Acrodynia). Even studies listed by the CDC on its website, to exonerate thimerosal as an autism culprit, link thimerosal exposure to low IQ, diminished language and motor skills, and tics, a family of neurological disorders that includes Tourette Syndrome. A Yale University study published last week suggests a link between vaccines and tics, as well as anorexia and OCD.

And for those who say the science has been settled since Dr. Andrew Wakefield’s Lancet paper on the MMR vaccine and its role in causing autism was discredited, think again. The paper had nothing to do with thimerosal, which is not in the MMR vaccine.

In 2004, an FDA official acknowledged in testimony before a Congressional committee that no government or privately funded study has ever demonstrated thimerosal’s safety, and that still stands today.

“It’s our hope that this challenge will elevate this important debate beyond name-calling and prompt a genuine examination of the relevant science. The American public is entitled to an honest, probing and vigorous discussion about this critical public health issue – a debate based on facts, not rooted in fear, or on blind faith in regulators and the pharmaceutical industry,” wrote Kennedy in a letter addressed to America’s reporters, journalists, columnists, editors, network anchors, on-air doctors and news division producers that was handed out at the press conference.

CHD also announced the launch of a crowdfunding campaign on Indiegogo to help support their educational efforts. Learn more about the specifics of the challenge and its rules.
###