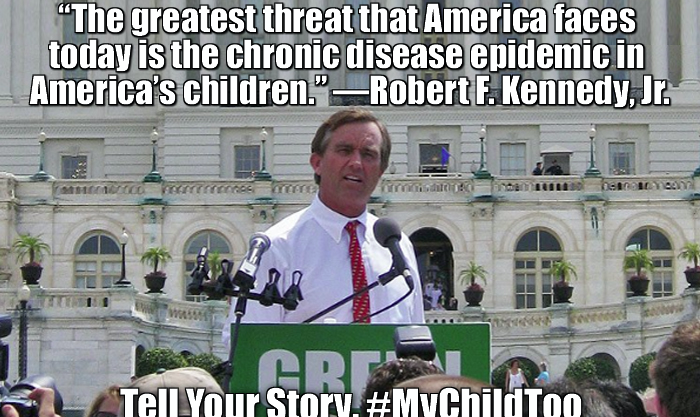 WASHINGTON, Sept. 12, 2018 /PRNewswire/ — Robert F. Kennedy, Jr. (RFK, Jr.) announced today the creation of Children’s Health Defense (CHD), a new organization expanding the mission of the World Mercury Project. “Our children’s ability to develop and thrive is being sabotaged by an avalanche of unprecedented health epidemics now affecting 54% of our children. This is unacceptable,” said Mr. Kennedy.

The facts are sobering: Autism rates are as high as one in 28 boys in some states, one in six children has a learning or behavioral disorder, one in every nine children has attention deficit hyperactivity disorder (ADHD), and 13% of kids in public school receive special education services. Food allergies, including severe anaphylactic reactions, increased 50% from 1997 to 2011. Last year over 15,000 children were diagnosed with cancer. There is an epidemic of autoimmune illnesses like diabetes, rheumatoid arthritis and eczema and half of U.S. adolescents have suffered from a mental, emotional or behavioral disorder. U.S. kids are 70% more likely to die before adulthood than kids in other rich countries and America’s infant mortality is much higher than in peer nations. The social and emotional impact of these epidemics on children and their families are enormous as are the financial impacts on our educational and medical systems.

In this video, Mr. Kennedy asks, “Why are our federal agencies not asking the essential question, ‘What is debilitating America’s children?’ We need to know that answer and we need to stop these exposures to our children today.”

Under Mr. Kennedy’s leadership, CHD plans to initiate multiple legal initiatives. The mission will be to focus on ending these epidemics by:

The Sickest Generation, a free CHD E-Book, details the childhood epidemics we are facing, the suspected environmental culprits and the steps needed to protect our children. If your child suffers from a chronic disease or was injured by an environmental toxin or vaccine, tell your story with #MyChildToo. To support CHD and its mission, visit igg.me/at/childrenshealth. Join the movement. Visit childrenshealthdefense.org.