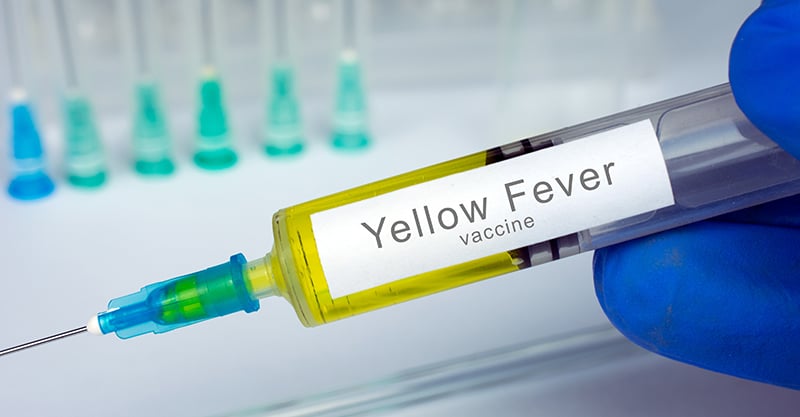 In January, 2019, news outlets reported the death of a leading cancer researcher in the UK, who suffered total organ failure not long after receiving a yellow fever (YF) vaccine. Both the UK and the U.S. recommend YF vaccination for anyone nine months of age or older who is planning to travel to a yellow-fever-endemic country in sub-Saharan Africa or South America.

Public health authorities admit that the YF vaccine—an attenuated live-virus vaccine—can, in “rare” cases, “have serious and sometimes fatal side effects” and that the risks are about four times higher in individuals age 60 or older, but many older travelers continue to be given the vaccine anyway. In the fatal January incident, the deceased scientist was 67 years old; after his death, the medical research institution that employed him instructed The Guardian to amend its news account to say that the death occurred “following,” rather than “as a result of,” yellow fever vaccination.

In the early 2000s, news reporters apparently had a bit more leeway to disclose vaccine risks. A 2001 story about YF-vaccine-related deaths in three countries concluded that the fatalities “underscored yet again that there is no such thing as a perfectly safe vaccine.” A recent search of “yellow fever vaccine adverse events” in PubMed (the National Library of Medicine’s free search engine) pulled up 168 search results for studies published over the past couple of decades. Considering that an estimated 99% of vaccine-related adverse events never even get reported, perhaps it is time to reexamine the yellow fever vaccine’s risks.

It’s difficult to imagine that [a commonly administered] inoculation against disease…could have an effect so darkly devastating on a human being. Yet here it is, recorded in all the pain, misery and anguish for us all to see.

The UK is no stranger to dramatic stories about YF vaccination gone awry. A former BBC foreign correspondent recently described his journey into psychosis after YF vaccination, noting that others who have contacted him report that they, too, suffered “delusion and hallucinations after having the vaccination.” He received his vaccine in Greece, where, rather unusually, “the doctors…told him they believed he’d had an adverse reaction to the vaccine.” After a difficult period of treatment and eventual recovery, the BBC reporter wrote a book and made a film about the “Kafkaesque” experience and is attempting to have the vaccine’s manufacturer, Sanofi Pasteur, “admit liability for what happened to him.” Commenting on the film, one individual stated, “It’s difficult to imagine that [a commonly administered] inoculation against disease…could have an effect so darkly devastating on a human being. Yet here it is, recorded in all the pain, misery and anguish for us all to see.”

According to a 2012 report coauthored by CDC researchers and others, YEL-AVD is fatal in over 60% of reported cases, with a median of 10 days from vaccination to time of death…

As scientists have come to admit that modern YF vaccines can cause “invasive and disseminated disease in…otherwise healthy individuals, with high lethality,” they have coined several terms to describe the phenomenon. The acute multiple organ system dysfunction suffered by the UK cancer researcher is called yellow fever vaccine-associated viscerotropic disease (YEL-AVD). Published studies also report serious side effects such as yellow fever vaccine-associated neurotropic disease (YEL-AND)—for example, meningitis or acute disseminated encephalomyelitis—as well as “immediate hypersensitivity or anaphylactic reactions.” According to a 2012 report coauthored by CDC researchers and others, YEL-AVD is fatal in over 60% of reported cases, with a median of 10 days from vaccination to time of death; severe YEL-AVD is characterized by low blood pressure, “hemorrhage, acute renal failure, and acute respiratory failure.” In 2015, an Oregon woman in her 60s died within nine days of receiving a yellow fever shot after suffering a severe reaction involving heart damage and kidney failure.

The CDC report states that YEL-AVD results from out-of-control “dissemination and replication” of the vaccine-strain virus—with studies having documented vaccine virus “in a number of postmortem tissues obtained from YEL-AVD case patients.” Researchers likewise posit that YEL-AND results from “direct viral invasion of the central nervous system by the vaccine virus” or, in some instances, an autoimmune reaction.

How many cases? Who knows?

As of 2010, an international working group identified 60 reports of YEL-AVD (both published and unpublished) from Asia, Australia, Europe, and North and South America. Conservative estimates based on these reports suggest that there may be 3-4 cases of YEL-AVD per million doses distributed, with 14-18 cases per million doses in individuals 60-plus years old and as many as 117 per million reported in a study involving a single vaccine lot.

However, many factors impede identification and reporting of adverse events following yellow fever (and other) vaccines, including “differences in definitions, surveillance system organisation, methods of reporting cases, administration of [YF vaccine] with other vaccines, incomplete information about denominators, time intervals for reporting events, the degree of passive reporting, access to diagnostic resources, and differences in time periods of reporting.” In a systematic review of studies published through 2016—focusing on cases of YEL-AVD in developed countries—the reviewers identified 62 cases but had insufficient evidence to provide “diagnostic certainty” for another 70 cases and excluded three dozen more cases due to “imprecise” coding. The reviewers then reported being unable to compute an overall rate due to the incomplete information. Combined with the known problem of underreporting of vaccine adverse events, official statistics may significantly underestimate the true incidence of adverse reactions following YF vaccination.

… an earlier-generation YF vaccine that was widely administered in francophone Africa was discontinued in 1982 due to genetic instability and high rates of post-vaccination encephalitis in children.

Following World Health Organization (WHO) recommendations, over two dozen countries in Africa and many countries in Latin America and the Caribbean include YF vaccination on their childhood vaccine schedules, generally recommending an initial shot at 9 to 12 months of age and a booster every 10 years. Gavi (the international vaccine alliance led by the Bill & Melinda Gates Foundation, WHO, UNICEF and the World Bank) has been pushing for increased YF vaccine coverage in Africa since 2011. The track record for yellow fever vaccination in Africa is spotty, however—an earlier-generation YF vaccine that was widely administered in francophone Africa was discontinued in 1982 due to “genetic instability” and “high rates of post-vaccination encephalitis in children.” Currently, the occurrence of severe adverse events in Africa is anyone’s guess, because detection of adverse events in low-income countries is particularly time-consuming and resource-intensive. Individuals who suffer reactions may also be less likely to reach health care, making it even less likely that the adverse events will be investigated and published.

CDC researchers … ascertained that reactions had occurred in individuals ranging from 5 to 88 years old. They classified 9% of the adverse events as serious—including death, anaphylaxis, Guillain-Barré syndrome and organ failure.

Although countries like the UK and U.S. warn of YF vaccine risks only for older adults or other vulnerable groups such as immune-compromised individuals, the published literature demonstrates the potential for adverse events in healthy individuals across all age groups. For example:

From chickens to tobacco farming

Some of the earliest attempts to develop vaccines focused on yellow fever (although a vaccine developed in 1901 killed 7% of the volunteers in whom it was tested and sickened another 19%). In the 1930s, vaccine scientists started experimenting with YF vaccines prepared from mouse brain cultures and chicken embryos. YF vaccines are still prepared by culturing YF virus in chicken embryos and adding substances like sorbitol and gelatin as stabilizers. Although there have been a few subsequent tweaks to the manufacturing process, the two substrains used to make yellow fever vaccines today both date back to work carried out by the Rockefeller Institute during World War II.

In the U.S., the only FDA-licensed YF vaccine is Sanofi Pasteur’s YF-Vax. However, YF-Vax is currently out of stock, so the FDA has temporarily approved the use of Sanofi’s other YF vaccine, Stamaril—the one that sent the BBC reporter into psychosis. When Sanofi’s head of vaccination innovation was asked about adverse events, he “admitted…that the vaccine hadn’t been reviewed in many years.”

The attention-getting reports of fatalities following YF vaccination “have provoked interest in developing a safer YF vaccine that can be easily scaled up to meet…increased global demand.” Researchers in the U.S. and Brazil think they have found the answer, proposing a genetically engineered (recombinant) vaccine produced using tobacco-based “molecular farming.” Thus far, trials of such vaccines have demonstrated inferior efficacy compared to the live-attenuated vaccines, prompting researchers to speculate on the need to include powerful adjuvants. It remains to be seen whether a tobacco-grown vaccine with strong adjuvants, that could usher in a host of other problems, will prove to be an improvement over the troubling live vaccines currently in use.