The Third Digital Revolution to Unleash the Power of Anti-Censorship 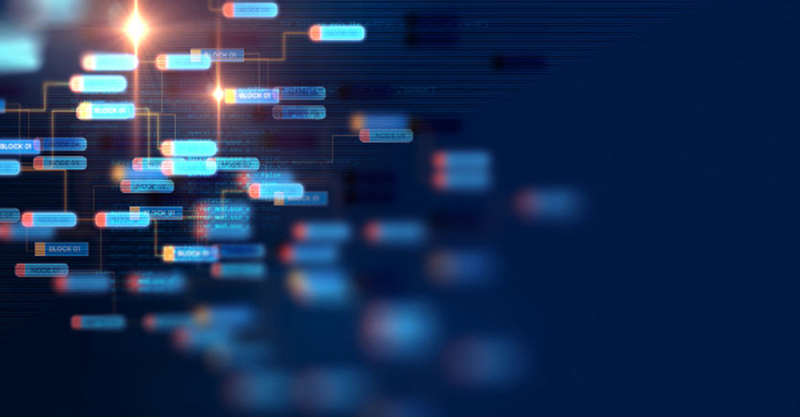 Last week, the Italian police raided the home and science laboratory of Drs. Antonietta Gatti and Stefano Montanari. The police snatched all of the digital assets owned by the husband and wife team of nanopathologists, grabbing laptops, computers, and flash-drives—and with it, years of work and research.

Because Gatti and Montanari had taken their research of nanodust and nanoparticles, from in-vivo (performed in a living organism) and in-vitro (performed in a test tube) to what unseen contamination might reside in vaccines in 2016, they came under the microscope of the United States, European, and Italian authorities. They had touched the third rail of medicine. They had crossed the no-go zone with the purported crime being scientific research and discovery. By finding nano-contamination in random vaccines, Gatti and Montanari revealed, for the first time, what no one knew: Vaccines had more than aluminum salts adjuvants, Polysorbate-80, and other inorganic chemicals in them, they also harbored stainless steel, tungsten, copper, and other metals and rare elements that don’t belong in shots given to fetuses, pregnant women, newborns, babies and toddlers developing their lungs, immune and nervous systems. 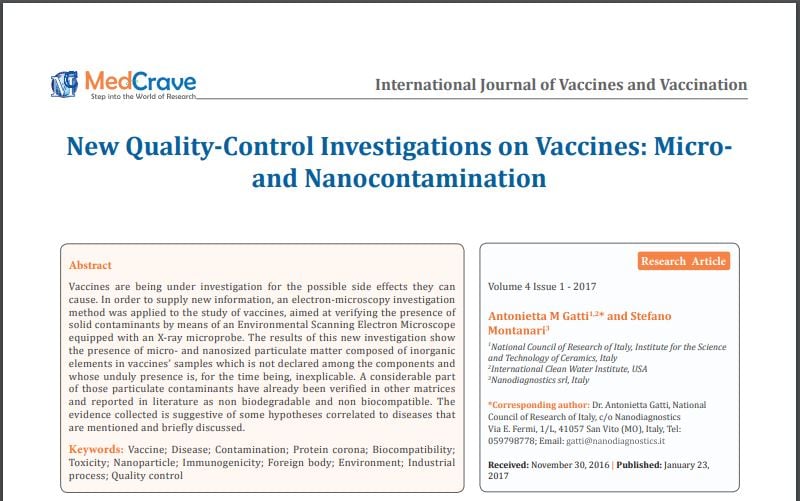 When the scientists published their findings in January 2017, New Quality‐Control Investigations on Vaccines: Micro‐ and Nanocontamination, the logical next step for the World Health Organization (WHO) and the Centers for Disease Control (CDC) should have been to open an investigation into their claims, hire independent scientists to run their own lab tests to confirm or refute the findings. If confirmed, then the healthcare agencies would enact new policies on safety of the vaccine supply chain, and enforce strict quality control and quality assurance programs.

But none of that happened. A year went by. It was cheaper for the authorities to attack the Italian scientists than upset the vaccine gravy train that supports the politicians.

Safety improvements are what ultimately happened to the motor vehicle and tobacco industries. But none of that has taken place with vaccine safety. Why? The so-called gatekeepers of healthcare are in bed with Big Pharma and mainstream media—which Pharma owns through its powerful advertising purchases—and vaccines have become a taboo subject. The media simply won’t investigate any negative vaccine stories.

Today, debating vaccines in public is frowned upon and demonized. Add to that the failure to inform the consumer of the 2018 censorship by algorithm in Silicon Valley from Facebook, Twitter, and Google/YouTube and the next bulwark that consumers, concerned doctors and scientists have to overcome in sharing information and scientific data is firmly in place.

Pile on the opioid crisis and millions of children overmedicated, and the death of logic is unabridged.

What can be done to bring transparency to the murky world of Big Pharma medicine and vaccine manufacturing, with government agencies failing to address real concerns and social media deleting free speech and public discourse?

Blockchain Born out of Crisis

In the fallout of the 2008 financial crisis, trust between consumers and the big banks and the federal government was broken. Satoshi Nakamoto published a nine-page brief, Bitcoin: A Peer-to-Peer Electronic Cash System, (https://bitcoin.org/bitcoin.pdf), that challenged the century-old policies of the Federal Reserve and central banks plying people and businesses with debt like a cheap drink.

Bitcoin, along with other cryptocurrencies, is upending the old way of big banks conducting business.

The underlying technology of Bitcoin is blockchain—a distributed public ledger of peer-to-peer transactions. Coming into its own as the Web 3.0, blockchain will transform every business process and sector in the Digital Age. It’s efficient in that it will eliminate the middleman, from fine art and diamonds, to purchasing houses and motor vehicles.

Like bitcoin, the democratization and decentralization of data by blockchain will empower consumers and small to medium size businesses to bypass the gatekeepers of an industry, government agency, central bank, corporation or social media platform. They will no longer hold exclusive control on data and information. Transparency is king. Everyone will reap the costs and time savings of radical efficiency.  (Learn more about the blockchain by listening to Andreas Antonopoulos on Understanding The Blockchain.)

Today, there are several health projects launched on the blockchain. They are industry-driven, from insurance and healthcare providers, yet are not drilling down to individuals. Why do hospitals, doctors, and dentists hold their patients’ healthcare records in separate databases, but not the people who generate that information?

A Google offshoot, Gem, announced last fall that it was working with the CDC and the Norwegian enterprise software company Tieto in building a blockchain-based platform for healthcare in the U.S. In attending a blockchain conference last fall in Dublin, I listened to a presentation on a blockchain project of “informed consent” that Tieto was building for the European Commission. When I asked the speaker if the “informed consent” platform would be the same project being built in the U.S. with the CDC, he flatly said, “No. It is a different platform.”

Not trusting the CDC, for its deliberate cover-up of the Agent Orange studies in the 1980s and hiring of mercenary scientists to cook vaccine safety data, it’s time for individuals to stand up and create their own blockchain projects, free from government interference, free from medical institutions beholden to Big Pharma, and free from the mainstream and social media’s censorship practices.

Blockchain Use Cases in Science

After being shell-shocked by the Mussolini-like dictatorship—a declining “flawed democracy” according to The Economist Democracy Index 2017: Free Speech Under Attack report —Dr. Antonietta Gatti responded to an email conversation, and agreed that “distributed ledger of the blockchain is needed in the healthcare industry.”

The blockchain use case for scientists like Gatti and Montanari in the future would be to keep their critical digital assets in an outside digital vault so that the next time scientists are raided by the police, their lifetime of work wouldn’t be lost…

Other blockchain use cases would trace the origins of vaccines from raw materials, such as the incubation of eggs and media that viruses are grown on, to every step in the manufacturing process and supply chain down to the local doctor’s office or pharmacist, who administers the inoculation.

Perhaps the biggest blockchain use case would be for individuals, while maintaining their privacy, to upload adverse reactions to vaccines and medicines, including follow ups and treatments for their injuries. That blockchain project would fill a massive void in the absence of such data, since more than 90 percent of doctors and hospitals don’t enter that information even when it’s reported.

The revolution isn’t confined to banking. Blockchain will transform how people collect, track, and share their health data around the globe. And that will frighten the healthcare gatekeepers, showing they are no longer the sole arbiters of their personal information.

James Grundvig is an author, investigative journalist, and COO and founder of a blockchain startup Myntum Ltd., based in Dublin, Ireland. As an author, his debut book Master Manipulator: The Explosive True Story of Fraud and Embezzlement at the CDC, breaks open the Poul Thorsen circle of corruption.

© 02.26.18 GreenMedInfo LLC. This work is reproduced and distributed with the permission of GreenMedInfoLLC. Want to learn more from GreenMedInfo? Sign up for the newsletter here http://www.greenmedinfo.com/greenmed/newsletter”