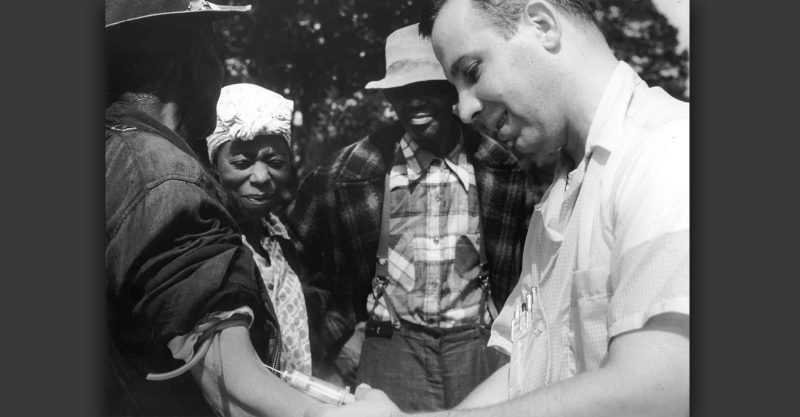 In mid-April, the CDC announced that black Americans—about 13% of the U.S. population—“might be disproportionately affected by COVID-19.” Among roughly six hundred hospitalized COVID-19 patients with known race/ethnicity, CDC found that one-third (33%) were black. In New York City, the one-time COVID-19 epicenter, death rates have also been substantially higher among both black Americans and Hispanic/Latino Americans than among whites or Asians. A June survey (which lumped COVID-19 with other respiratory illnesses) seemed to further confirm these trends, reporting that since March 1st, 11% of black Americans versus 5% of all Americans had experienced the death of a family member or close friend due to “COVID-19 or respiratory illness.”

In a June interview with TIME magazine, Melinda Gates referenced these findings and the pandemic’s uneven impact on different racial/ethnic groups. While reiterating her husband’s talking point that “the way out of COVID-19 will be a vaccine,” Gates embellished her remarks with a race-riots-timed twist, stating that a COVID-19 vaccine “needs to go out equitably.” In her view, “equitably” means that “black people . . . and many other people of color” need to be near the top of the vaccine waiting list.

Among observers who understand that coronavirus vaccines are, by definition, experimental and who are familiar with the Gates family’s vaccine agenda, Madam Gates’ remarks immediately sparked concerns. Although the media have tried to dismiss these as silly “conspiracy theories,” U.S. medical history provides reasons not to take Mrs. Gates’ statements at face value. In the era of COVID-19, two historical examples—the infamous Tuskegee syphilis study and the forced sterilization of Carrie Buck—seem worth reviewing.

From the outset, the researchers were comfortable not only withholding treatment but also actively working to keep the men in the dark about available treatments.

Many commentators acknowledge the shadow cast by the Tuskegee syphilis study, which helped foster black Americans’ longstanding mistrust of the public health establishment. Tuskegee—one of the core case studies analyzed in modern bioethics and research ethics courses—is noteworthy in numerous respects, not least of which is its astounding duration and the fact that it only ended because journalists finally exploded the story and made it impossible to continue.

The “unquestionably illegal” Tuskegee study, carried out by the U.S. Public Health Service (PHS) of which the CDC is a part, began in 1932 and continued for four decades. The government researchers coldly used the study to assess the “natural history” of syphilis in 399 black men with latent syphilis to whom the agency denied both informed consent and treatment. (The study also included a control group of 201 men.) An after-the-fact timeline currently on the CDC website shows that it was in 1936 that the investigators made the decision to “follow the men until death.” From the outset, the researchers were comfortable not only withholding treatment but also actively working to keep the men in the dark about available treatments.

In 1950, around the time that the therapeutic benefits of penicillin were becoming increasingly evident, senior PHS administrator Oliver Wenger had the audacity to discuss morals, stating: “We know now . . . that we have contributed to their ailments and shortened their lives. I think the least we can say is that we have a high moral obligation to those that have died to make this the best study possible” (p. 9). By 1972, only 74 men from the original group survived; along the way, 128 men died directly of syphilis or related complications, at least 40 spouses were infected and 19 children were born with congenital syphilis. In 1969, three years before a PHS whistleblower helped the media expose the study, the CDC was still “reaffirm[ing]” the need for the study and “gain[ing] local medical societies’ support.”

… the Tuskegee study had moved from being a singular historical event to a powerful metaphor symbolizing racism in medicine, misconduct in human research, the arrogance of physicians, and government abuse of Black people.

In 1997, Vanessa Northington Gamble, MD, PhD (now at George Washington University) led a successful campaign to extract an apology for the Tuskegee study from President Clinton. By that time, there were only eight survivors. In a commentary that same year in the American Journal of Public Health, Gamble suggested that the Tuskegee study had “moved from being a singular historical event to a powerful metaphor” symbolizing “racism in medicine, misconduct in human research, the arrogance of physicians, and government abuse of Black people.” Gamble also described “why African Americans’ historically based fears of medical research persist,” citing the post-Tuskegee example of a Los Angeles County Health Department study conducted in the late 1980s and early 1990s. The study administered an experimental measles vaccine to hundreds of “mostly Black and Latino” infants without informing the babies’ parents “that the vaccine was not licensed in the United States or that it had been associated with an increase in death rates in Africa.” One infant died (although Gamble hastened to clarify that it was apparently “for reasons not related to the inoculations”).

Medical historians have described strong “affinities” between eugenics and public health, affinities that helped justify decades of involuntary sterilization of women and men of all races and ethnicities throughout the U.S. One of the most famous examples (Buck v. Bell) came into view in the Supreme Court in 1927, when the Court endorsed the sterilization of Carrie Buck, a poor, young white woman arbitrarily and untruthfully deemed by the state of Virginia to be “feebleminded.” Buck was one of an estimated 70,000 Americans forcibly sterilized in the 20th century after Indiana set state sterilization laws into motion in 1907. Today, forced sterilization is a war crime under the Rome Statute for the International Criminal Court (article 2.b.xxii). The author of a 2016 book about eugenics has noted that America’s “cutting-edge” eugenics sterilization ideas and practices provided a template that the Nazis were later only too happy to borrow. He also has observed that when the Supreme Court rendered its “ugly” Buck v. Bell decision—still on the books today—the Court radically distanced itself from being a “temple of justice.”

One of the reasons that the Buck v Bell decision continues to reverberate is that the Justices relied heavily on the legal precedent established by Jacobson v. Massachusetts, the 1905 case that allowed mandatory smallpox vaccination. As avowed eugenicist Justice Oliver Wendell Holmes put it at the time, “The principle that sustains compulsory vaccination is broad enough to cover cutting the Fallopian tubes.” Referring to Buck, her mother and the child that Buck had prior to her forced sterilization, Holmes also cavalierly wrote in his decision, “Three generations of imbeciles are enough.”

In a 1997 paper appearing in the same issue of the American Journal of Public Health as Gamble’s Tuskegee commentary, medical historian Martin Pernick, PhD noted how the 1927 Court relied on three “key values” in making the connection between compulsory sterilization and mandatory vaccination under a state’s police powers. Pernick summarized the Court’s three assumptions as follows:

First, preventing disease was better than coping with its consequences. Second, the collective well-being of society could outweigh the interests of individuals who posed an alleged health menace. And third, state power could compel compliance with health measures when persuasion alone appeared inadequate.

The three assumptions have disturbing ramifications in the current COVID-19 context—particularly because modern-day jurists are now attempting to lasso the narrow 115-year-old Jacobson decision into providing the rationale for forced coronavirus vaccination. Pernick’s 1997 paper also made another important point that resonates with current events. According to the historian, the intertwining of public health and eugenics goals became possible in major part due to the messianic early-20th-century conviction—fostered by Louis Pasteur’s germ theory and August Weismann’s theory of heredity—that “disease could be not just reduced but eradicated.” Bolstered by this view, the two theories enabled “eugenics and public health to promise ‘final solutions’ to both infectious and hereditary diseases.” Should it trouble us that Bill Gates recently told Stephen Colbert that COVID-19 vaccines are “the final solution”?

It is . . . unethical when people championing the cause of vaccines are the same ones who are also investing in vaccine development.

Historical aberrations or business as usual?

In 1966, leading Harvard physician Henry K. Beecher decried widespread “ethical lapses in research carried out by physician-scientists in renowned universities” and “demonstrated that poor treatment of human subjects was not confined to the barbaric practices of Nazi doctors.” Over thirty years later, World Health Organization researchers republished Beecher’s 1966 paper, describing it as “the most influential single paper ever written about experimentation involving human subjects.” In the paper, Beecher provided almost two dozen examples of “unethical or questionably ethical studies” and emphasized that informed consent “has little meaning unless the subject or his guardian is capable of understanding what is to be undertaken and unless all hazards are made clear.” Beecher also noted that “An experiment is ethical or not at its inception; it does not become ethical post hoc – ends do not justify means.”

An article published in India’s The Economic Times in 2014—describing disastrous Gates-funded trials of HPV vaccines in thousands of young girls in India—could easily serve as an addendum illustrating Beecher’s timeless statements. After the girls began falling ill and seven died, a committee on health and family welfare investigated and discovered shockingly unethical informed consent procedures. The committee also revealed that neither the children nor their parents had any idea “about the nature of the disease or the vaccine.” An activist who later submitted a petition to India’s Supreme Court zeroed in on the Gates Foundation’s role as funder, arguing that the foundation “has to take full responsibility” and stating, “It is . . . unethical when people championing the cause of vaccines are the same ones who are also investing in vaccine development.”

The 2014 article also quoted a Delhi professor of social medicine and community health. Condemning the Gates Foundation’s vaccine agenda, she commented, in particular, on the funder’s willingness to “dilute safety testing criteria and cut short on time required to conduct proper observation studies.” These remarks deserve careful consideration at present, with Gates-funded, rushed human trials of experimental vaccine technologies that are more “Silicon Valley” than “medicine.” If Gates’ wanton vaccine track record is any indication, the Tuskegee study and the forced sterilizations of the last century should not be dismissed as historical aberrations—and the would-be recipients of Bill and Melinda’s “equitable” technologies have every right to be concerned.