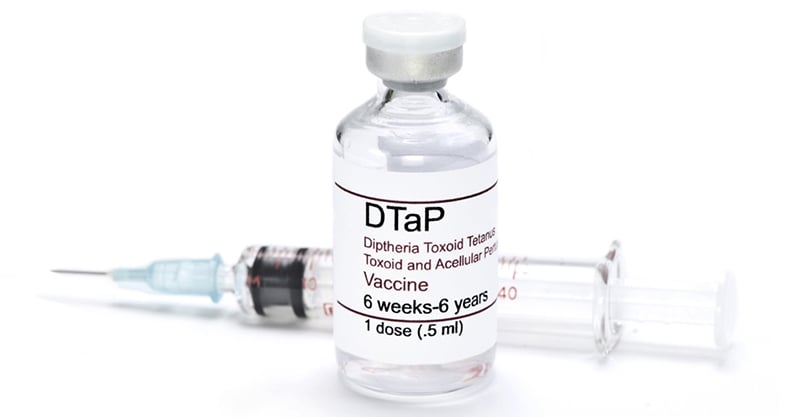 Until the 1990s, the vaccine administered to children for diphtheria, tetanus and pertussis protection was the DTP vaccine, one of the first combination vaccines ever licensed by the U.S. Food and Drug Administration (FDA). However, as a “whole-cell” vaccine (meaning that it contained the entire Bordetella pertussis organism rather than purified components), DTP had a significant downside—including published safety concerns dating back to the 1930s and widespread reports of neurological damage emanating from both the United States and other countries. By 1991, the Institute of Medicine cautiously reported that the evidence was “consistent with a possible causal relation between DTP vaccine and acute encephalopathy” [brain disease].

…characterized pertussis prevention as ‘an unresolved problem,’ noting the ‘progressive increase’ in pertussis incidence after introduction of the acellular vaccines and the need for ever more boosters.

To pacify a concerned public, the Centers for Disease Control and Prevention (CDC) advised a phase-out of the whole-cell vaccine around 1991, while promoting an “acellular” version called DTaP (diphtheria, tetanus and acellular pertussis). By 1997, the switch had taken place for all five doses in the series, recommended for infants and children at two, four, six and 15-18 months and 4-6 years. In the two decades since the changeover, however, the DTaP vaccine has been plagued by embarrassingly low effectiveness. A 2018 article characterized pertussis prevention as “an unresolved problem,” noting the “progressive increase” in pertussis incidence after introduction of the acellular vaccines and the need for ever more boosters. Another recent commentary flatly stated that “pertussis is…not under control in any country” and that new types of pertussis vaccines are needed.

Nonetheless, on the safety front, health authorities have regularly praised the DTaP vaccines as offering a safer alternative than their whole-cell predecessors. Is this reputation for safety well-deserved? CDC researchers writing in June 2018 in Pediatrics seem to think so—but a closer reading of their findings suggests otherwise.

The analysis of VAERS reports identified tens of thousands of AEs (N=50,157) in the aftermath of a DTaP-containing vaccine. (A single VAERS report may include more than one AE, so the adverse event categories are not mutually exclusive.) VAERS, by the federal government’s own admission, captures only about 1% of AEs; thus, the 50,000-plus AEs probably vastly underrepresent the number of real-world DTaP-related vaccine injuries.

The study’s results illustrate the heavy burden of vaccines to which children in the U.S. are subjected. For about 88% of the VAERS reports analyzed, children received the DTaP vaccine concurrently with one or more other vaccines, even though the five types of DTaP vaccine in and of themselves already constitute potent combinations. Researchers who have looked at the number of vaccines administered at well-child visits have pointed out that American infants receive more vaccines in their first year than infants anywhere in the world.

…many vaccines (including DTaP) are administered in bundles at health care visits around two and four months—exactly when nine out of ten SIDS deaths occur.

Roughly one in nine (11.2%) of the reported AEs were coded as serious, and 15% of all serious AEs were deaths (844/5,627). (If one were to average these deaths over the 26 years from 1991 through 2016, this would represent over 32 deaths annually.) Of note, the investigators’ perusal of death certificates, autopsy reports and medical records showed that the reported cause for nearly half of the deaths (48.3%) was sudden infant death syndrome (SIDS), nearly always in children under six months of age. Although the researchers dismiss the possibility of a causal relationship between vaccination and SIDS, evidence from other corners is strongly suggestive of just such a link. In fact, it strains credulity to deny a plausible connection: many vaccines (including DTaP) are administered in bundles at health care visits around two and four months—exactly when nine out of ten SIDS deaths occur.

Serious but non-fatal AEs cited in 10% to 35% of all VAERS reports included systemic symptoms such as pyrexia (fever), vomiting, seizures/convulsions, diarrhea, lethargy and hypotonia (muscle weakness). Anaphylaxis occurred far less frequently, but most reported anaphylactic reactions arose quickly—within 30 minutes of vaccination. Seizures were the fourth most common serious AE reported. Other studies have detected a heightened risk of febrile seizures when children receive DTaP simultaneously with other vaccines. Febrile seizures are not benign (as once thought), which makes the frequency of post-DTaP seizures concerning.

The authors do not explain why they counted pyrexia as both a serious and nonserious AE, but it accounted for one in five of the latter. As a potential sign of drug allergy and an indicator of a “systemic inflammatory response to a stimulus such as infection,” pyrexia and its prominence are noteworthy. Back in 2004, other CDC researchers commented on the difficulty of ascertaining “the true importance of fever as an [adverse event following immunization]” and noted a lack of clarity regarding “how to interpret fever data derived from vaccine safety trials or immunization safety surveillance.”

What the study leaves out

Although the CDC authors noted that their analysis excluded Quadracel, the most recently approved combination DTaP-IPV vaccine (licensed in 2015), they curiously do not explain why they omitted several other licensed DTaP vaccines that were in widespread use during the time period in question:

The authors also neglect to mention that all five DTaP vaccines included in their review contain one or more neurotoxic aluminum adjuvants, along with formaldehyde and polysorbate 80, a stabilizer for which information on potential chronic health effects is “not available.” The Tripedia vaccine that the study excluded featured both aluminum and the mercury-containing preservative thimerosal. Adverse events reported during post-approval use of Tripedia included “idiopathic thrombocytopenic purpura, SIDS, anaphylactic reaction, cellulitis, autism, convulsion/grand mal convulsion, encephalopathy, hypotonia, neuropathy, somnolence and apnea.” By excluding these other acellular DTaP vaccines, the CDC study underestimates the magnitude of DTaP-related adverse reactions still further.

The CDC authors wrap up their assessment of DTaP vaccine safety with the boilerplate pronouncement that their analysis “did not identify any new or unexpected safety issues.” Parents might disagree, wondering whether it makes sense to expose their child to a not-insignificant risk of serious DTaP-related injury when the risk of diphtheria is virtually non-existent in the U.S. (zero cases in 2016) and the risk of tetanus is likewise minuscule. (Tetanus, in any event, is non-communicable.)

… pertussis incidence has steadily increased (not decreased) in the U.S. since 1980, despite high vaccine coverage.

Evaluating the risks of pertussis infection versus pertussis vaccination in different age groups is somewhat more complex but requires admitting up front that pertussis incidence has steadily increased (not decreased) in the U.S. since 1980, despite high vaccine coverage. Discussing the problem of waning immunity, a 2012 study reported that “after the fifth dose of DTaP, the odds of acquiring pertussis increased by an average of 42% per year.” In fact, the track record for whole-cell and acellular pertussis-containing vaccines shows that both are fraught with problems. Back in 1993, researchers writing in the New England Journal of Medicine observed that a pertussis epidemic in Cincinnati had “occurred primarily among children who had been appropriately immunized” with the whole-cell vaccine. The same pattern of pertussis outbreaks in fully vaccinated populations has occurred with the acellular vaccines. A related but underacknowledged problem is the role of vaccinated individuals as asymptomatic carriers and reservoirs of infection for vulnerable infants. Finally, some researchers have suggested that pertussis vaccination may result “in selection of more virulent strains that are more efficiently transmitted by previously primed hosts.” Specifically, the acellular vaccines only contain B. pertussis antigens “that hold little or no efficacy against B. parapertussis,” which is another causative agent of pertussis infection; researchers concluded in 2010 that acellular vaccines “interfere with the optimal clearance of B. parapertussis” and may “create hosts more susceptible to B. parapertussis infection.”

Whether one focuses on safety or effectiveness, it is apparent that simplistic slogans and Pollyanna attitudes are no help in evaluating vaccine risks and benefits. Ultimately, it should be up to parents—not CDC researchers biased against a fair consideration of risks—to make their own informed vaccine decisions.