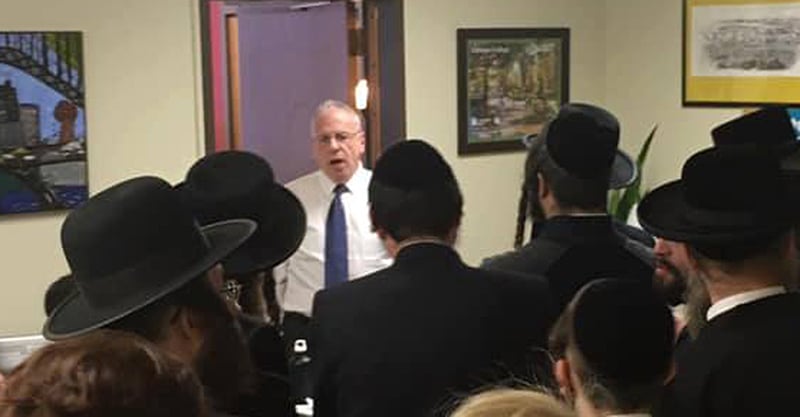 CHD PRESS RELEASE, NEW YORK, April 10, 2019 /PRNewswire/ — The New York City Commissioner of Health declared a public health emergency yesterday, ordering all people who live, work or reside in four Brooklyn zip codes to be vaccinated with the Measles-Mumps-Rubella vaccine declared to be “effective and safe.” Non-compliance with the order is a misdemeanor subject to criminal and civil fines, including imprisonment. Mayor Bill de Blasio warned that residents have 48 hours to get the vaccine or face a $1,000 fine. Only those with documented immunity, medical contraindications or infants under six months are exempt from the vaccine mandate.

This order primarily affects Orthodox and Hasidic Jews living in the Williamsburg area of Brooklyn who do not vaccinate because it violates their core religious beliefs. The MMR vaccine is manufactured using WI-38 human diploid lung fibroblasts obtained from aborted fetal tissue. New York Governor Andrew Cuomo said in response that is was “legally questionable” whether people can be forced to get vaccinated if it violates their religious beliefs.

Children’s Health Defense (CHD) is supporting a legal challenge to this dangerous, unprecedented overreach.  While the City has unquestionable authority to control disease outbreaks, it may not violate the bedrock principle of prior, free and informed consent to all medical interventions, including vaccines. This is a fundamental human right. The City may quarantine, isolate, trace contacts and strongly urge vaccination, but it may not impose such a draconian mandate without demonstrating necessity, reasonableness, proportionality, harm avoidance, non-discrimination, due process and equal protection. The Commissioner has failed to do this; the City’s actions violate New York State law.

“I am shocked that Mayor De Blasio would resort to such police state techniques to control an outbreak of measles. I don’t believe the City’s actions will withstand legal scrutiny,” said CHD Board Member Mary Holland, JD. The City is requiring that people receive Merck’s MMR vaccine, even though the outbreak is only for measles. The MMR II product insert acknowledges that death is a potential side effect from the vaccine, along with a long raft of other potential permanent injuries. A review of claims submitted to the National Vaccine Injury Compensation Program of identified 48 cases of encephalopathy following MMR vaccine. Of those, eight children died, and the remainder had mental regression and retardation, chronic seizures, motor and sensory deficits, and movement disorders. The authors, all associated with the Vaccine Injury Compensation Program concluded that a causal relationship between measles vaccine and encephalopathy may exist as a rare complication of measles immunization.

Robin Stavola, a member of CHD, commented on the order saying “I regret every day of my life that I was not given full informed consent about the MMR vaccination as my healthy and beautiful daughter, Holly, suffered for days before dying at 5 years old from encephalopathy as a result of her MMR vaccine required before entering school.” Her family cautions that the order has the potential to create long-term adverse health consequences that may be worse than what it purportedly prevents.

“This case goes beyond a dispute over religious freedom,” said CHD Chairman Robert F. Kennedy Jr. “Thanks to the Merck federal whistleblower litigation, we now know that Merck’s MMR should have never been approved, much less mandated. To get its license Merck allegedly ordered its scientists to falsify efficacy data to fraudulently conceal the fact that the mumps component quickly wanes, triggering dangerous outbreaks in older populations where it can cause sterility in men and women. The Centers for Disease Control and Prevention (CDC) reported 150 outbreaks resulting in 9,200 cases of mumps in fully vaccinated adults, dwarfing the recent measles outbreaks. We are confident that no American court will allow government bureaucrats to force American citizens to take risky pharmaceutical products against their will.”

Children’s Health Defense looks forward to the opportunity to have a neutral arbitrator scrutinize the legitimacy of the City’s order.