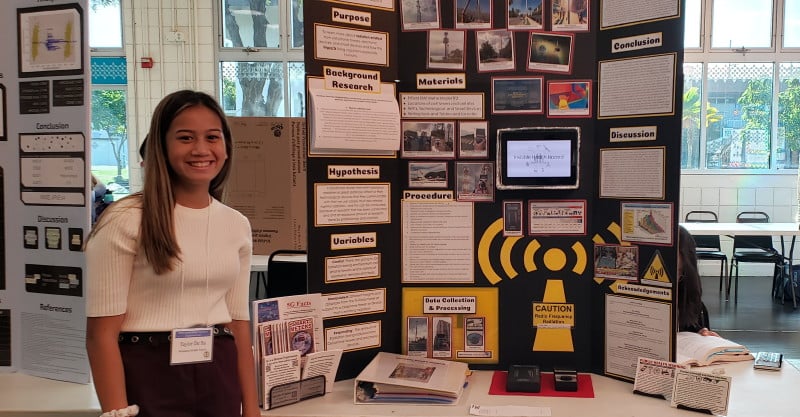 I met Taylor, an 8th grader, on my trip to Hawaii in January 2020. She came to my lecture in Honolulu. I was excited when she approached me and told me that she came to learn more about the harms of wireless for her science project. Taylor decided to do her science project on the radiation that is emitted from wireless devices and the health effects caused from these invisible but very harmful electromagnetic waves. The title she gave to her project “Invisible Health Hazard”, perfectly describes the problem.  She came to my lecture after she already won the science competition in her school and was selected to go to the district’s competition.

Unfortunately, many children and teenagers do not attend lectures on the harms of wireless radiation. For that reason and as part of the Children Health Defense education efforts, we decided to start a program called “EMF Children Ambassador” which aims to get children involved. We think children are the best to educate their peers about the harms. Taylor agreed to be a CHD EMF Child Ambassador.

To support her work, we approached Alasdair Philips from EMFields-Solutions who invented the ‘Acoustic Meter’, a meter that measures wireless radiation and provides not only the levels of radiation but also enables people to hear the radiation. Mr. Phillips generously decided to gift Taylor with the meter. Josh Hart from Stop Smart Meters helped with the delivery.

“It is very important, and so inspiring, that young people like you are helping lead awareness of important issues. It always amazes me how one ‘relatively unknown’ person can change human consciousness…I have been working on these issues for about 30 years now(!). It is a long hard road, but every person like you can make a significant difference.

And indeed, Taylor is making a difference. On February 10, I got an exciting email from Taylor saying she was chosen as the 2020 Central District Junior Division Champion. She will be competing in the State Science Fair that will take place on April 8-10. Taylor has great ideas on developing meters for children and teenagers. We will be supporting her efforts to spread this knowledge to her peers.

She wrote to us:

“I am now very passionate about this topic and have ideas to build upon. Hopefully, I will be able to make my generation understand the responsibilities of using technology.”

Thank you Taylor and WELL DONE!

Initially, I was planning on researching Teenage Mental Behavior since mental health is a hot topic, at the same time my parents (more specifically my mother) was adamantly lecturing my brother and me about not being addicted to our electronics. One day, my mom came home from a massage and was sharing a story about her masseuse being physically affected by a cellphone tower. I thought to myself that was crazy and how could that be possible? I’ve NEVER known anything about cell-phone towers and cell beams let alone understand 5G. I always thought that technology was so cool, so how could this possibly affect our health? I only thought it was bad because it gets addicting and distracting. After meeting Sun Wong, interviewing him, and doing some research I was inspired to learn more and have been very lucky to meet Dr. Greene and Attorney Dafna Tachover from Children’s Health Defense. I am now very passionate about this topic and have ideas to build upon. Hopefully, I will be able to make my generation understand the responsibilities of using technology.

Invisible Health Hazard is a science fair project that focuses on EMF that is being radiated from Cell-phone towers and other electronic ‘smart’ devices, and how these EMFs affect our health. I first started this project by just measuring Cell-phone towers as I met Mr. Sun Wong who was explaining to me many health effects he has been experiencing ever since a near-by cell-phone tower was being repaired. I then began measuring and doing more research on how this could be.

I found that cell-phone towers communicate with all of our electronic devices that emit radiation. I then borrowed an EMF meter and measured cell-phone towers and beams and at common locations that people go to daily like shopping centers, airports, schools, and apartments. 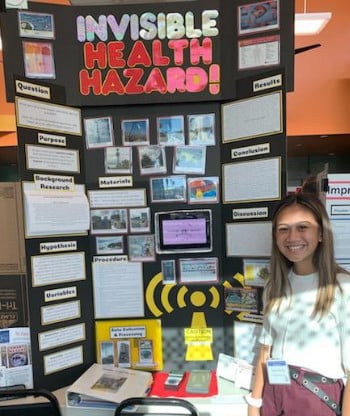 I thought that if the radiation was high when no students were around then the radiation must be even higher when students are around because we are carrying our laptops, phones, Bluetooth devices, and all the smart boards are on. I decided to do another round of readings when students were in the classrooms with all our electronics out and found that the readings were very LOW! I thought this was very interesting and thought that I needed to do further research and decided to attend a meeting with Dr. Greene and found that our bodies are actually absorbing all the radiation which is why the radiation is low when people are around.

I did more research and was able to meet another amazing expert- Ms. Dafna Tachover and learn a LOT of information that greatly help me. After communicating with Attorney Dafna and a few other experts with the help of Children’s Health Defense and Stop Smart Meters,  I was able to receive my own Radio-Frequencies radiation meter from Alasdair Philips from EMF Solutions who invented the meter which is called an ‘Acoustic Meter’. A lot of information that I have learned from Attorney Dafna and Dr. Greene helped me improve my project’s information and expand my knowledge on my topic. I will now be participating in the Hawaii State Science Fair and hope to keep adding and learning more information.