HPV: The Biggest Battle is Being Fought Right Now

One of the most difficult questions parents can face is: do we vaccinate our children?

For some, the answer is immediate; for others, not so. Some parents are confused or mistrusting of the vaccine industry and, in turn, anyone administering their products; while others are first in the queue to ensure that their children get all the recommended shots. Recent events, unfolding globally and reported in the leading medical journals, will not make that decision any easier.

Unbeknownst to the general public, an internal war is underway regarding medical research in general and the HPV vaccine in particular. The battle brings to a head familiar themes that many parents, doctors and researchers have been attempting to debate in an honest and open way for decades now but have been prevented from doing so: biased research and cover-up regarding vaccine efficacy and safety.

What makes this time different is that the battle is amongst the leading medical researchers in the world, and academic blood is being spilt across the pages of the top tier medical journals.

The journey we are about to embark on will be a surprise, maybe a shock, for some of you; for others, you will say under your breath: I told you so.

HPV as a cause of cervical cancer is regularly touted across media globally even though it is not definitively proven as causal. Scientifically, the best we can say is that HPV is associated with cervical cancer. 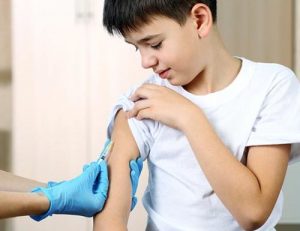 The scope of HPV-associated cancer has now been widened to include head and neck cancers in boys, leading to the UK Government, recently, making the HPV vaccine available for boys.

We have an HPV vaccine that in some countries is mandated, being used for HPV-associated cancers that not only has HPV not been definitively proven to have caused, but also the vaccine has not been proven to prevent. The evidence we will uncover will shine a much needed light on the mechanisms, largely unknown by the general public and medical community, that brought the HPV vaccine for boys to the attention of the UK government and led to it being implemented in its vaccine schedule. Evidence that, at the very least, reveals significant conflict of interest and heavily biased research. There are also other data that are now emerging that paint a very disturbing picture of this HPV vaccine, one that could have been predicted: an increase in cervical cancer rates and not a prevention of cancer after introduction of the vaccine. We will cover those data in another article.

At the centre of any doctor-patient relationship should be trust – trust that both parties are having an honest and open dialogue and that they will work in the best interests of the patient. Those principles are enshrined in national law and more generally as global standards of Human Rights. Specifically, all medical encounters, including the administering of a vaccine, revolve around informed consent. In order that a patient can be fully informed of a medical procedure, the doctor/nurse that is performing the intervention must, in turn, be fully aware of the pros and cons of that procedure.

At the time of writing this article, few if any healthcare practitioners know what we are about to discuss.

HPV vaccine has had a dark shadow over it for many years now, with significant harms being reported very soon after the first girls were vaccinated to “protect” them from cervical cancer. The medical establishment, pharmaceutical industry, government organisations and advisors to government have attempted to shake-off the cloud, but in doing so have brought upon themselves a storm – a potential Mayake event worthy of any Astrochronologist, a storm that was triggered by the introduction of the HPV vaccine for boys in the UK in July this year.

A research paper by the Nordic Centre, part of the global organisation the Cochrane Group, was submitted for publication to the British Medical Journal (BMJ).The Cochrane Group up until this year had a 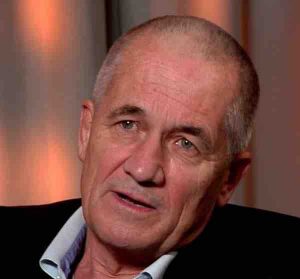 well-deserved reputation for excellence as an independent voice for research, especially one of its global centres – the Nordic Centre, headed-up by Dr. Peter C. Gøtzsche (pictured). The paper from the Nordic Centre, critical of the HPV vaccine, was deserving of publication and promotion in the BMJ to its members who are, effectively, the entire British Medical community. Unbelievably, however, it was blocked from publication and rejected; the UK’s doctors would not get to see it and the information it contained criticising the HPV vaccine.

On May 9th of this year, after the rejection of the HPV-critical paper, Arbyn and colleagues, from another centre in the Cochrane Group, published a research paper on the HPV vaccine with one difference, it was pro-vaccine. The very day it was published, the BMJ did not attempt to block the information in the paper; in fact, it published a positive article on the paper in its main journal, ensuring that its members got to see that information and were left in no doubt that the HPV vaccine should be promoted to patients across the UK. The timing of the BMJ article (published the same day as the Arbyn paper was released) demonstrated that it was ready to go. This all happened just as calls for the HPV vaccine to be introduced for boys were building and increasing the pressure for the UK government to place it on to the schedule.

First: the Arbyn paper was scientifically flawed as it did not cover all available research pertaining to the HPV vaccine; in fact, it did not even look at any data from Gardasil 9, the very vaccine now promoted for boys in the UK and the current iteration of the vaccine predominantly in use globally. And second: Arbyn knew of those flawsbecause the Nordic Centre had made him aware of his paper’s shortcomings:

Furthermore, the review’s authors cannot claim ignorance of the trials they excluded because they had been provided with an index of studies on the vaccines, written by the critics

After the UK government had announced that it would include the HPV vaccine for boys in its schedule, the Nordic Centre eventually gained publication of a paper critical of the (pro-HPV vaccine) Arbyn paper. In fact, it was just three days after the UK government had announced the HPV vaccine inclusion in its vaccine schedule that the paper critical of the vaccine was allowed publication. That paper, however, was not promoted to the BMJ members; it was parked to the side in a cadet journal and may have remained hidden there were it not for the actions of two very courageous individuals, Dr David Healy and John Stone, both long term advocates of transparency and honesty in medical research. Dr Healy is a research clinician and Mr Stone is the UK editor for Age of Autism, an online journal primarily concerned with issues pertaining to autism and vaccine safety.

The review was influenced by reporting bias and biased trial designs.

Authors of Cochrane reviews should make every effort to identify all trials and the trials’ limitations.

Remarkably, one of the peer reviewers, after reading the Nordic Centre’s 2nd paper, did not balk at the conclusions drawn by the evidence:

The Cochrane systematic review [Arbyn pro-HPV vaccine paper] is biased and incomplete, probably due to financial conflict of interest.

And one can see why:

Most of the 14 Cochrane authors on the first published protocol for the Cochrane review had major conflicts of interest related to the HPV vaccine manufacturers. The Cochrane review only has four authors, three of whom had such conflicts of interest a decade ago. The review’s first author currently leads EMA’s ‘post-marketing surveillance of HPV vaccination effects in non-Nordic member states of the European Union’, which is funded by Sanofi-Pasteur-MSD that was the co-manufacturer of Gardasil.

The BMJ’s actions in initially preventing publication in its main journal of the Nordic Centre’s research critical of the HPV vaccine; and then promoting a flawed paper that was positive about the vaccine, while all the time being aware of the Nordic Centre’s critical data; and then after the vaccine had been accepted and put on the UK vaccine schedule, only then publishing a critical paper of the HPV vaccine but not promoting that paper (rather, choosing to park it to the side) were rightly alarming to Dr Healy and John Stone. They both quickly pointed out what to any reasonable person seemed just not right. 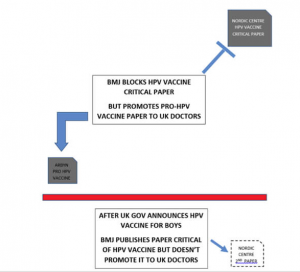 HPV RESEARCH PAPERS AND THE BMJ

But the story didn’t end there. Dr Healy and John Stone’s exposé of the story resulted in an internal Cochrane enquiry that eventually revealed nothing to see here; move along – effectively, all the appearance of a “whitewash”.

But a head had to roll: was it to be the author of the flawed paper promoting the HPV vaccine? No, it was the man that challenged it, Dr. Gøtzsche from the Nordic Centre. Yes, the internationally recognised expert in medical research and author of a leading clinical medicine text was to be sacrificed and publicly shamed after daring to criticise flawed, pro-vaccine research. Dr Gøtzsche was removed from his position on the board of the Cochrane Group. Some of you may be saying to yourself, we’ve seen this before: leading, well respected expert criticises vaccines; leading, well respected expert is gone. As if by magic! But he wasn’t the only board member to go:

The ‘suggested’ resignation of another four members of the Board [which] was a well-planned, pre-determined operation for the elimination of all the critical voices form the Governing Board [also took place].

But this time it’s different. This time, there has been a seismic change. Things haven’t quite gone to plan, and instead of other prominent experts hiding and distancing themselves from Dr. Gøtzsche, the “convicted criminal”, they are standing up for him and standing up for science: honest, transparent science! We now have the most senior medical professionals involved in research and publishing that research, in battle with what some consider the hidden hand of the pharmaceutical cabal. A battle the likes of which we have never seen before.

The fight back has begun and now the author of the pro-HPV vaccine paper, Arbyn, is being investigated for undeclared conflicts of interest.

Will the power and influence of the pharmaceutical industry win the day, or will honest, scientific research prevail? I think more to the point: will we sit on the sidelines and watch while the few fight the many for the future of our children by exposing Pharma bias and fraud, or do we support them by writing to our MPs, government officials and newspapers demanding transparency in all areas of healthcare and, in particular, transparency in vaccine research.

Never has there been a better time to join the fight!

Original article published by CHD with permission from the Liberty Beacon.