Don’t Fall for the CDC’s Outlandish Lies About Thimerosal 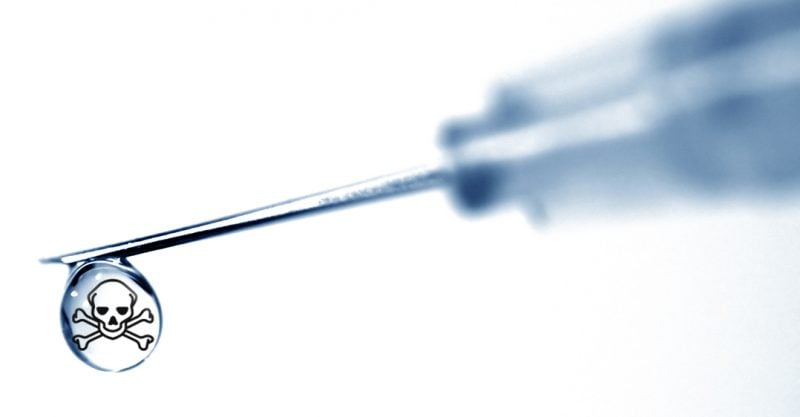 Propaganda experts have long admitted that the “big lie” is an important tool for molding public opinion. A psychological profile of Hitler carried out by the U.S. Office of Strategic Services noted that one of the German leader’s “primary rules” was that “people will believe a big lie sooner than a little one” and “if you repeat it frequently enough people will sooner or later believe it.”

[The CDC’s] Immunization Safety Office posted a fact sheet that once again insists that “thimerosal in vaccines is not harmful to children,” despite ample evidence to the contrary.

CDC FACT SHEET— “The evidence is clear: thimerosal is not a toxin…”

The Centers for Disease Control and Prevention (CDC) appears to agree that a big and oft-repeated lie is a powerful public relations tool, because in August, its Immunization Safety Office posted a fact sheet that once again insists that “thimerosal in vaccines is not harmful to children,” despite ample evidence to the contrary. The fact sheet trots out the same handful of thimerosal-related studies (“conducted by CDC or with CDC’s involvement”) that it has used for years to silence thimerosal critics. Fortunately, multiple resource pages on the Children’s Health Defense website make it easy to rebut the CDC’s regurgitated falsehoods. Our website provides a thimerosal FAQ, information dispelling myths about thimerosal’s use in vaccines and countering false vaccine safety claims (including claims about thimerosal), analysis of the flawed studies that the CDC relies on to exonerate thimerosal from any role in the childhood epidemics of neurodevelopmental disorders—and more. Below, we summarize three of the most obvious reasons to ignore the CDC’s latest attempt to pull the wool over the public’s eyes.

The CDC says “the evidence is clear” that thimerosal is “merely a preservative” and not a neurotoxin. However, no one who actually takes the time to examine the scientific literature can rationally conclude that mercury in any form—including the mercury in thimerosal—is safe for humans. The handful of CDC-funded or CDC-approved studies listed in the thimerosal fact sheet stand “in sharp contrast to research conducted by independent researchers over the past 75+ years that have consistently found Thimerosal to be harmful”; this independent research has linked thimerosal to “neurodevelopmental disorders, …tics, …speech delay, language delay, attention deficit disorder, and autism.” Robert F. Kennedy, Jr.’s book, Thimerosal: Let the Science Speak, describes hundreds of peer-reviewed scientific publications and the “broad consensus among research scientists that Thimerosal is a dangerous neurotoxin.”

The CDC falsely claims that “thimerosal was taken out of childhood vaccines in the United States in 2001.” However, 25 micrograms of thimerosal remain in many of the influenza vaccines administered in the U.S., including to pregnant women and infants. In fact, “thimerosal wasn’t so much removed as it was moved around.”

All eight studies included in the CDC fact sheet involve lead or co-authors accused of fraud or known to have been involved in behind-closed-doors data manipulation or weighed down by serious conflicts of interest.

All eight studies included in the CDC fact sheet involve lead or co-authors accused of fraud or known to have been involved in behind-closed-doors data manipulation or weighed down by serious conflicts of interest. Dr. William Thompson, who authored three of the studies in his former capacity as a senior CDC vaccine safety scientist, made a whistleblower deposition to Congressman William Posey and issued statements through his personal attorney about fraud and destruction of data at the CDC. In one of his most egregious examples, Thompson reported that his bosses, including Branch Chief Frank DeStefano (an author on three of the studies included in the fact sheet), ordered Thompson and other CDC scientists to get rid of data demonstrating vaccine-induced autism. As described previously by Children’s Health Defense:

“DeStefano called his four co-authors into a room and ordered them to dump the damning datasets into a giant garbage can. The published study omitted those datasets.”

The bulk of Thompson’s whistleblowing revelations occurred in 40-plus phone conversations and over 10,000 pages of documents shared with Dr. Brian Hooker. In those conversations, Thompson also stated that CDC officials “worked hard” to “dilute Dr. Thompson’s strong and statistically significant finding…that thimerosal exposure via infant vaccines causes tics in boys.” In fact, Thompson asked Hooker to “start a campaign to publicize the fact that multiple CDC-sanctioned publications show that thimerosal causes tics.”

In addition to the studies authored by Thompson and DeStefano, two of the papers held out by the CDC as definitive proof of thimerosal’s innocence are 2003 studies authored by Thomas Verstraeten and Paul Stehr-Green—two participants at the infamous secret meeting held in Simpsonwood in 2000 to discuss the relationship between exposure to thimerosal-containing vaccines and neurological damage in children. Both Verstraeten and Stehr-Green were heavily involved in trying to make a clear association between thimerosal and neurodevelopmental effects seem unimportant. Although the Verstraeten study nonetheless went on to report “statistically significant associations between thimerosal and language delays and tics,” the CDC fact sheet dismisses the associations as “weak” and “not consistent.”

As outlined previously by Children’s Health Defense and others, and as indicated in the preceding sections, there are a variety of reasons not to trust the results of the eight studies included in the CDC fact sheet—including CDC funding and other conflicts of interest as well as erroneous and fraudulent reporting of data. The table below summarizes the studies’ major problems. 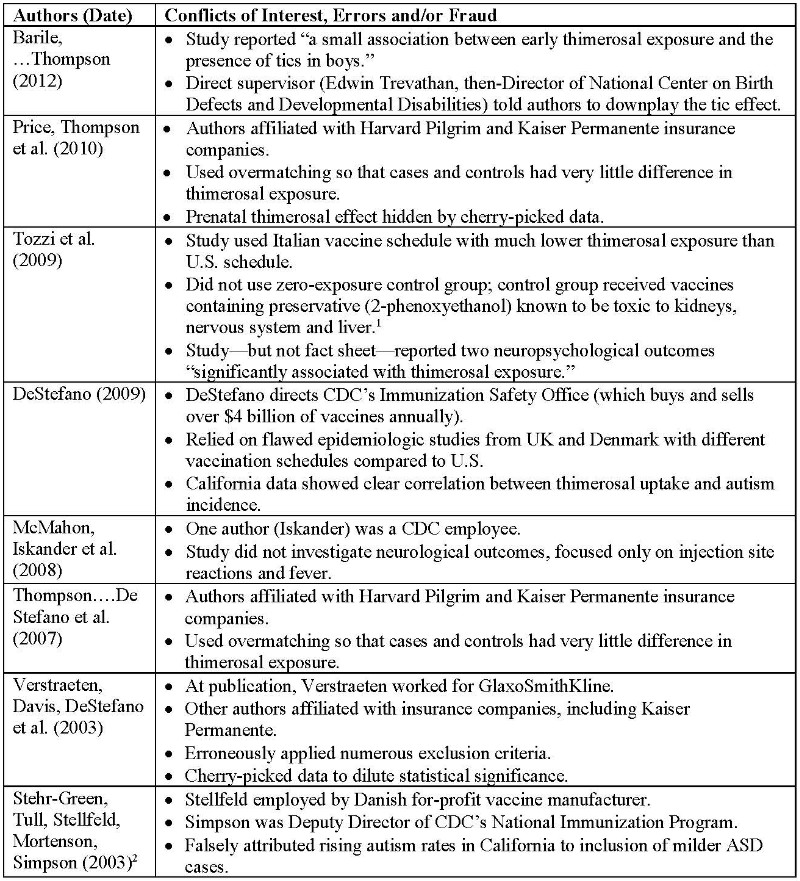 1. http://www.sciencelab.com/msds.php?msdsId=9926486
2. The CDC fact sheet includes the Stehr-Green study twice, formatting the study slightly differently in each of the two rows; although the duplication is immediately apparent to the attentive reader, a casual reader might conclude that the CDC had nine rather than eight studies at its disposal.

At this juncture, with over 80 studies connecting the dots between thimerosal and autism alone, and new studies appearing every day that link other vaccine ingredients such as aluminum to the chronic illness epidemics beleaguering today’s children, the CDC has lost all credibility when it makes poorly substantiated claims about thimerosal or vaccine safety. An agency that buys and sells well over $4 billion of vaccines annually clearly has a vested interest in tamping down any discussion of vaccine risks. Fortunately, the public increasingly recognizes that the CDC’s “fact sheets” lies must be read with a large grain of salt.