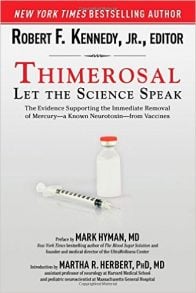 Thimerosal: Let the Science Speak: The Evidence Supporting the Immediate Removal of Mercury – a Known Neurotoxin – from Vaccines

A review and digest of several hundred peer-reviewed publications in the scientific literature demonstrating the deadly neuro toxicity of the mercury based vaccine preservative thimerosal. The book also dissects the fraudulent population studies ginned up by the CDC to defend thimerosal from its critics.