Vandana Shiva: ‘Miracle of Life’ Is What ‘Gives Me Hope’

Vandana Shiva, Ph.D., environmental activist, author and founder of Navdanya International, discussed her new book, “Terra Viva,” plus Bill Gates and what gives her hope for the future on a recent episode of “RFK Jr. The Defender Podcast.” 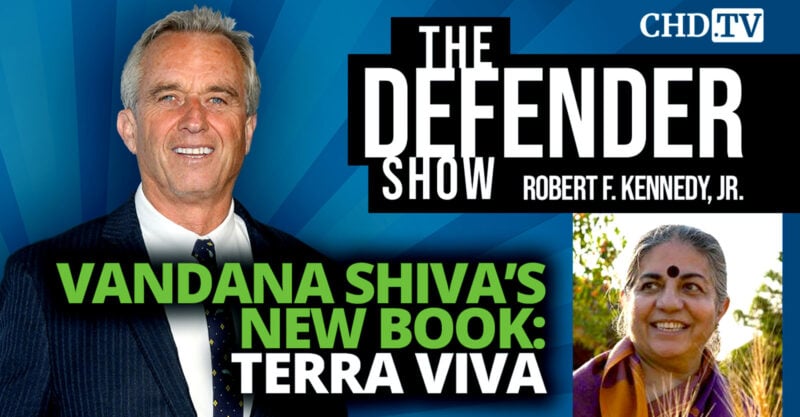 “We have to vigorously defend our minds and their freedom,” according to Vandana Shiva, Ph.D., environmental activist, author and founder of Navdanya International.

“Whether it’s the American freedom movement or the Indian Freedom Movement, we have to tap every lesson we can on how to stay free in times of total control in every dimension of life,” Shiva told Robert F. Kennedy, Jr., on a recent episode of “RFK Jr. The Defender Podcast.”

Kennedy asked Shiva how she, as a scientist who sees climate as an existential threat, deals with the efforts by “the Davos Billionaire Boys Club” — wealthy individuals like Bill Gates and Klaus Schwab, founder of the World Economic Forum, who convene in Davos, Switzerland — as they “appropriate the climate issue for their agenda of total social control.”

“Climate change to me is about forgetting how to live on this beautiful planet and we’ve got to learn again how to live,” Shiva told Kennedy.

Kennedy and Shiva discussed her new book, “Terra Viva: My Life in a Biodiversity of Movements,” which includes “wonderful stories” about her dad, a forest conservator, and her mother, a farmer, and how Shiva grew up to bear the nickname the “Gandhi of grain.”

Shiva and Kennedy also discussed Bill Gates and his vision for the future of food and agriculture.

“If the old colonizers took over land and called the land their property and displaced the indigenous people, what Gates is really doing is continuing the work of Monsanto in trying to own the seed,” Shiva explained. “He now controls the seed supply of the world.”

Shiva and Kennedy traced the history of Gates’ activities, including:

According to Shiva, we are seeing the convergence of the failed biotechnology revolution — which was “supposed to control pests and weeds” but “instead gave us “super-pests and cancer” without controlling the weeds after all — with the information technology revolution.

The “age of information,” Shiva said, is really about “no one having knowledge at all.”

“When I wrote ‘Oneness VS. The 1%’ with my son,” Shiva told Kennedy, “he warned me [that] in the next few years, there will be no true scientific information available in the world except the work you do yourself” because all information presented in the name of science would be “propaganda” and “misinformation.”

“True scientists,” she said, are being silenced or marginalized.

Kennedy asked Shiva, “Can you tell us, since you’re always buoyant and optimistic — what is the source of hope for everybody?”

Shiva said she fervently believes in the “miracle of life.” She added:

“The data’s clear that the more photosynthetic biomass and biodiversity we increase, the more we help the planet heal itself. And we also get food and oxygen in the process.

“We can pull down a hundred gigatons of carbon dioxide every year by just doing good farming that cares for the land and grows biodiversity. That’s why I have hope.”