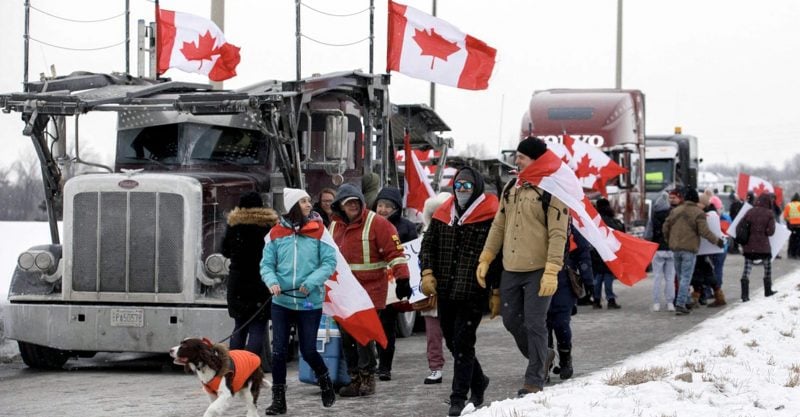 In a move that gives him “sweeping powers,” Canadian Prime Minister Justin Trudeau invoked — for the first time in history — Canada’s Emergencies Act in response to what political commentator Krystal Ball characterized as a “pretty much completely peaceful” protest.

Those powers include giving Canadian banks the ability, without a court order, to “immediately freeze or suspend accounts” of any Canadians’ who have donated $25 or more to the trucker convoy fundraising accounts.

In an episode of “Breaking Points With Krystal and Sagaar,” Ball’s co-host, Saagar Enjeti, said the Canadian government also will be “seizing any funds that go towards the protests, including cryptocurrency.”

With the powers granted to the government by the Emergencies Act “they can not only seize and suspend your driver’s license forever, they can also go and take money out of the owner of the truck’s bank account,” Enjeti said.

“So we are looking at full-fledged financial warfare on the truckers.”

Not all Canadian leaders are on board with this drastic move, said Ball, pointing to a Reuters report that the premiers of Alberta, Manitoba and Saskatchewan opposed the move. Quebec’s Premier François Legault also opposed the move, stating he feared it would “throw oil on the fire,” according to the Montreal Gazette.

Canada’s War Measures Act, the predecessor to Trudeau’s Emergencies Act, was last used in 1970, when Quebec separatists kidnapped French and Canadian diplomats and murdered one of them.

“So that was the last time anything similar to this was invoked,” Ball said.

“You have here the Canadian Prime Minister, who is our neighbor to the north, invoking the Emergencies Act, declaring all out financial warfare on his own citizens and suspending civil liberties … in a supposedly free and open society,” Enjeti said.

If this is happening in your country, “you [clearly] don’t live in a free country,” he argued.

Meanwhile, Canadian civil liberty organizations are denouncing Trudeau’s crackdown on peaceful protestors and the border blockade at the Montana-Alberta border has come to an end.

The anti-mandate border blockade between Coutts, Alberta and Montana has officially come to an end, according to Rebel News. “We as the Coutts convoy have decided that, as a peaceful protest [and to] maintain that narrative, we will be rolling out [Tuesday] morning,” a spokesman for the truckers told Rebel News. Police on Monday evening arrested 11 people involved at the Coutts border blockade. Meanwhile, the protest in Ottawa continues.