With children still reeling from the educational, physical and social-emotional effects of school closures, data now show that their suffering is in vain because the closures did little to influence COVID-19. 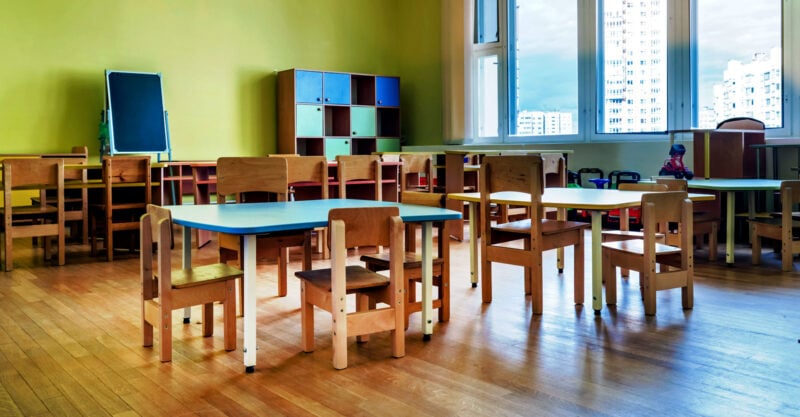 The fallout from school closures that occurred during the COVID-19 pandemic is only beginning to be understood, but the early data coming in are alarming.

The percentage of children who cannot read a simple story has jumped dramatically, with those in low and middle-income countries most affected.

Prior to the pandemic, 57% of 10-year-olds in these countries could not read properly, but this has increased to an estimated 70%.

The effects could be lifelong, leading to $21 trillion lost due to lower lifetime earnings.

Education inequality increased due to closures

Around the world, schools closed for an average of 95 school days from March 2020 to February 2021, but while many schools in western countries continued to teach remotely, those in lower-income countries often did not.

There are also significant differences in how long full and partial shutdowns persisted.

Schools in sub-Saharan Africa were closed for 32 weeks, compared to 73 weeks in South Asia.

In the Philippines and North Korea, many schools are still shut down.

“Poorer countries stayed closed longer than their neighbors. Places with low-performing schools kept them shut for longer than others in their regions.

“Closures were often long in places where teachers’ unions were especially powerful, such as Mexico and parts of the United States. Unions have fought hard to keep schools closed long after it was clear that this would harm children.

“School closures were also long in places where women tend not to hold jobs, perhaps because there was less clamor for schools to go back to providing child care. Many children in the Philippines live with their grandparents, says Bernadette Madrid, an expert in child protection in Manila.

“That made people cautious about letting them mingle in the playground … decisions about reopening in places such as Brazil dissolved into local squabbles. In America a full year separated the districts that were first and last to restart properly.”

What’s clear is that existing education inequalities have only worsened due to the closures.

Lower-educated parents in The Netherlands reported they felt less able to help children with schoolwork during the closures, for instance, while middle-class parents in the United Kingdom spent more time homeschooling their children than parents from the working class.

“If this is the case, and these learning losses persist, they can be detrimental for the development of skills in the long run, and in turn lead to an increase of the existing inequalities in opportunities in education and on the labor market,” researchers wrote in PLOS One.

Indeed, using data from 300,000 students in The Netherlands, they uncovered large inequalities in learning losses during the COVID-19 pandemic based on parents’ education and income.

Pitfalls of school closures were evident from the start

As early as April 2020, researchers from the University of Leuven in Belgium and Columbia University in New York warned that COVID-19 school closures were “a social crisis in the making,” with poor children inordinately affected.

Those in low-income households also did not always have access to computers or a reliable internet connection necessary to continue remote learning, and some had no suitable place to do homework or were living in homes without adequate heat or access to books.

“While learning might continue unimpeded for children from higher income households, children from lower-income households are likely to struggle to complete homework and online courses because of their precarious housing situations,” the article, published in Lancet Public Health, explained in the early months of the pandemic.

Indeed, we’ve now seen that learning losses in lower-income countries are significantly worse than those in rich countries.

According to the Economist:

“A paper published in May by analysts at the World Bank, Harvard and the Brookings Institution looks at 35 studies of learning loss from 20 mostly rich countries. It finds that the average loss across these studies was equivalent to what would usually be learned in one-third to one-half of a year of normal schooling.

“… Similar research in America found that children were on average between 8-19 weeks behind. In some countries, the results were truly dire. In South Africa primary schoolchildren tested after a 22-week closure were found to have learned only about one-quarter of what they should have.

“Brazilian secondary-school pupils who had missed almost six months of face-to-face school did similarly dreadfully. A study of 3,000 children in Mexico who had missed 48 weeks of in-person schooling suggests they appeared to have learned little or nothing during that time.”

The disturbing details revealed by the World Bank’s analysis of COVID-19 student learning loss include the following — keep in mind that this data is from primarily high-income countries; data from low-income countries could be even worse:

The Netherlands presented a “best-case” scenario for school closures during the pandemic, with a short (eight-week) lockdown period, equitable school funding and “world-leading” rates of broadband access, which should suggest that impacts to learning would be minimal.

Even with this “best-case” scenario, however, students made “little or no progress” during remote learning, according to a study by University of Oxford researchers, and again those from disadvantaged homes had the greatest learning losses.

The study found a learning loss of 3 percentile points, which is equivalent to one-fifth of a school year.

However, learning losses were up to 60% greater among students from less-educated homes.

“Are these results a temporary setback that schools and teachers can eventually compensate? Only time will tell whether students rebound, remain stable, or fall farther behind,” the researchers explained.

“Dynamic models of learning stress how small losses can accumulate into large disadvantages with time … Moreover, our results may underestimate the full costs of school closures even in the context that we study.

“Test scores do not consider children’s psychosocial development, either societal costs due to productivity decline or heightened pressure among parents.”

The mental health effects of school closures are also difficult to quantify, yet cannot be understated.

Aside from learning online, 87.6% reported that children watched YouTube while 78.3% said their children played online games.

Research from Iran also found that school closures resulted in children increasing their screen time and altered their sleep duration and pattern, with the majority sleeping for 12 hours or more throughout the day.

Social isolation imposed during the pandemic has been cited as a reason for pushing some children with mental health issues “over the edge,” and one-third of U.S. parents surveyed said their child became more sad, depressed or lonely during the pandemic.

Regarding school closures specifically, a survey of 2,324 adults with at least one school-aged child found an association between school closures and worse child mental health outcomes, with older children and children from lower-income families most affected.

With children still reeling from the educational, physical and social-emotional effects of school closures, data now show that their suffering is in vain because the closures did little to influence COVID-19.

Researchers from the Croatian Institute of Public Health used data from week nine of 2020 to week 10 of 2021 in Croatia and revealed that school openings had no association with COVID-19 morbidity and mortality trends in the country, leading them to conclude:

“In winter 2021 effect was completely lacking and numbers were independent of schools’ dynamics. The observed inconsistent pattern indicates that there were no association of school openings and COVID-19 morbidity and mortality trends in Croatia and that other factors were leading to increasing and decreasing numbers.

“This emphasizes the need to consider the introduction of other effective and less harmful measures by stakeholders, or at least to use school closures as a last resort.”

Likewise, in a literature review and meta-analysis of the effects of lockdowns, including school closures, on COVID-19 mortality, researchers from Johns Hopkins Institute for Applied Economics, Global Health and the Study of Business Enterprise, Lund University and the Center for Political Studies in Copenhagen, Denmark, revealed lockdowns had little to no effect on COVID-19 mortality.

In fact, back in 2006 public health officials went through a list of mitigation actions that could be used in the event of pandemic influenza, along with their potential repercussions.

Lockdowns, including quarantine and extended school closures, were not recommended, as this overriding principle was explained:

“Experience has shown that communities faced with epidemics or other adverse events respond best and with the least anxiety when the normal social functioning of the community is least disrupted.”

“Closure of schools beyond 10 to 14 days was not recommended, unless all other points of contact, such as restaurants and churches, were also closed.”

But, they noted, “Such widespread closures, sustained throughout the pandemic, would almost certainly have serious adverse social and economic effects.”

Schools in 25% of countries have no catch-up plans

The silver lining may be that 75% of countries have made some plans to help children catch up from the disastrous effects of COVID-19-related school closures.

Tutoring increased focus on reading and math, and return to in-person learning have helped some children to close the gap on the learning they lost during the pandemic.

However, schools in one-quarter of countries have no plans to help students catch up, and many aren’t even tracking if students have returned to school.

Speaking with the Economist, Jaime Saavedra with World Bank called school closures perhaps “the worst educational crisis for a century, and certainly since the world wars,” adding:

“My fear is that 15 years from now people will be writing papers documenting consistently lower earnings, productivity and well-being for people who are now between six and 20 years old. I don’t see societies taking this seriously.”