Exclusive: ‘Sometimes I feel I Am Damaged for Life,’ Says Woman Injured by Pfizer Vaccine

In an exclusive interview with The Defender, Sandra Ortiz described the injuries she experienced after getting Pfizer’s COVID-19 vaccine, her medical journey and what her life is like today. 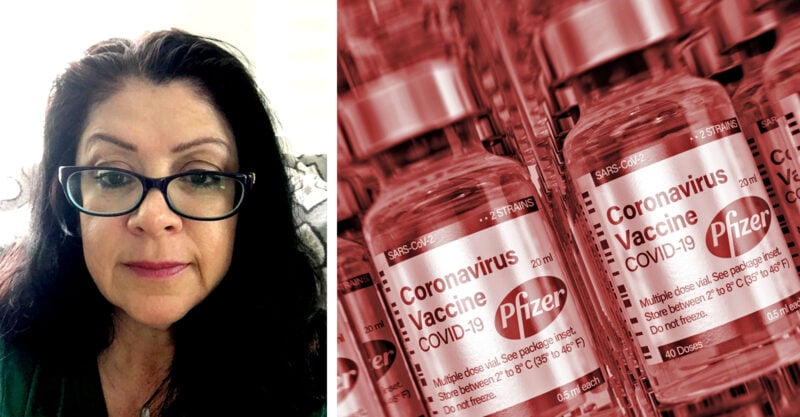 It took only a couple of minutes for her to feel the waves of heat, followed by a feeling of faintness. “I immediately felt like my life was in danger, something was really wrong with me,” said Sandra Ortiz.

That’s how Ortiz described her reaction to receiving her first and only dose of the Pfizer COVID-19 vaccine on May 26, 2021.

Ortiz, now 54 years old, is a mail carrier in Arlington, Texas. In an exclusive interview with The Defender, she described her initial injuries and ongoing symptoms. She provided extensive documentation to corroborate her claims.

Ortiz described what happened when she got the vaccine — and how the pharmacist who administered it reacted:

“I felt waves of heat in my body and felt as if I was going to faint. I did not faint. But I immediately felt that my life was in danger, something was really wrong with me.”

She asked the pharmacist what would happen if she were allergic to the vaccine, and did he have an EpiPen, Ortiz said. The pharmacist said he did. “But when I was lying on the floor, all he did was call the ambulance,” she said.

Ortiz may have sustained an immediate adverse event following her vaccination, but her symptoms were far from fleeting. She told The Defender she experienced:

Her symptoms led to several visits to the emergency room and significant lost time at work, which put her career at risk.

“I missed work for over three months and ended up at the emergency room five times,” said Ortiz. “When I returned to work, I [was] approved for a very easy route at the post office. It is mostly curbside. And thank God, otherwise, I wouldn’t have been able to do the route.”

However, even with a less challenging route, Ortiz still faced significant difficulties, she said:

“There were many times, while driving to work, that I felt sick and ended up at the hospital or going back home. It caused me to leave work many times.

“There was one time that I pushed myself to work with the weird head pressure and confusion and eye blurriness, and I ended up rear-ending a vehicle on my route.”

Similar to the experience of several other vaccine injury victims who recently spoke to The Defender, Ortiz described multiple doctors’ visits, during which doctors usually dismissed her concerns that the COVID-19 vaccination caused her health problems.

“I’ve been to many doctors but all the tests are okay,” said Ortiz. “Many doctors would insist that the vaccine does not cause what I was suffering [from].”

Even after all of these tests, said Ortiz, “All the doctors told me that the Pfizer vaccine” did not cause her injuries. Instead, they blamed “anxiety” for her symptoms.

“When I look at a lot of my medical records, I was surprised how in so many pages they didn’t even mention the vaccine, just that I am there, in the ER, for high blood pressure.”

She described one particularly disheartening experience with one of her doctors:

“My family doctor pretty much was annoyed with me. She refused to run any tests for me.

“I had to beg her to check my vitamin D levels because of the extreme fatigue. She acted as if I was not insured and was begging for free services.”

According to Ortiz, only one doctor took her vaccine-related concerns into consideration. Her functional doctor “added more vitamins to my daily routine, and advised me to purchase a sauna for sweating to detox, [in addition] vitamin infusion, massages, etc.,” she said.

Medical bills are piling up

Many of the adverse events Ortiz experienced have subsided. However, as she told The Defender, she still does not feel like her health is what it was prior to getting the vaccine:

“I still have the head pressure that comes with confusion and eye blurriness. I still have fatigue, shortness of breath, and extreme anxiety. I also feel that I am suffering from PTSD.”

Ortiz is thankful that she has overcome many of the more serious symptoms, but she said she nevertheless feels “damaged.”

“Sometimes I feel that I am damaged for life, but as long as I can work, I am okay,” she said. “My biggest fear was that I was going to stay disabled and didn’t know how I was going to pay my bills.”

At one point, she felt her job was in jeopardy. “At work, I was written up and threatened to be fired,” she said, adding that her situation has since improved due to benefits she received as a result of the Family and Medical Leave Act.

Ortiz said she reported her injuries to the Vaccine Adverse Event Reporting System (VAERS), but she has not heard back from them. In the meantime, medical costs have piled up.

“When I do not recognize a telephone number, I don’t pick up because I have a lot of medical collectors behind me,” Ortiz said. “The insurance does not pay everything and I fell behind on many bills.”

Exclusive: Woman Injured by Gardasil Vaccine Shares How COVID Shots Injured Her Mother and Ended the Life of Her Grandmotherhttps://t.co/gDbo2AcHtc

Connecting with other vaccine injury victims

Ortiz told The Defender her ordeal also took a toll on her personal life. “My fiancé left me two weeks after the vaccine. He couldn’t deal with it.”

However, her family has been “very supportive,” she said.

Nevertheless, Ortiz told The Defender she experienced feelings of “desperation” until she found support groups that helped.

“In my desperation, while googling I saw that Sen. Ron Johnson [R-Wis.] was having a town hall meeting with vaccine-injured people. I was surprised that this meeting was not aired in the news.

“I finally found a recording online and that’s where I found the first group of people that were injured by the vaccines, C19VaxReactions.com. I was so grateful to know that I was not the only one.”

Ortiz said she found out about the town hall meeting too late to attend it, but “wished [she] could be there.” When attempting to locate more information about it, however, she found nothing in the mainstream media.

“I looked on television, the news, waiting for it to be covered,” she said. “Nothing, just the same, urging people to go get the vaccine. Most deaths are [among] the unvaccinated, they said.”

Ortiz expressed a similar sentiment about an event she was able to attend, a rally for vaccine-injured individuals that took place in Washington, D.C., on Nov. 2, 2021.

“I went to the Washington, D.C. rally, thinking that the news was going to cover it,” she said. “I cannot believe how dirty the news outlets are. I thought they report to society what’s going on around us. But now I know they only report what they want us to know.”