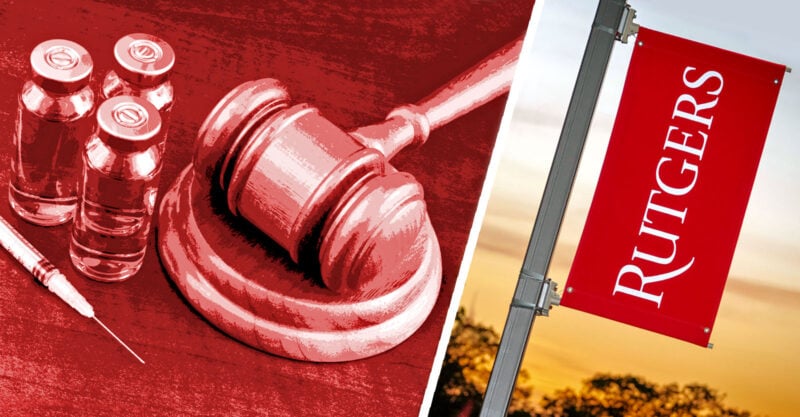 Rutgers has 30 days to respond to CHD’s brief, filed in the U.S. Court of Appeals for the 3rd Circuit. CHD will have 21 days to file a final response after that. The court will then set up a panel that may hear oral arguments. The court can rule anytime after that.

The appeal seeks to demonstrate the court failed to accept the plaintiffs’ allegations as true, which is the legal standard in a motion to dismiss, said Julio C. Gomez of Gomez LLC, lead counsel in the case.

“Only with those assumptions can you assume that it is reasonable to impose these mandates, but all of those facts are in dispute.”

The appeal disputes whether, as a university, Rutgers has the authority to mandate vaccination. It also challenges the dismissal on the basis of informed consent, challenging the notion that an experimental drug can be mandated at all.

Gomez told The Defender the case has strong local ramifications. “It could really determine whether any university in New Jersey had the authority to mandate vaccines of this nature at all,” he said.

On the national level, CHD’s lawsuit raises the constitutional issue of whether any public university can mandate an experimental vaccine.

“Was the amount of information that a public university had enough to reasonably mandate these shots over and above the individual’s right to informed consent and to say no to medical treatment?” Gomez asked.

Whichever side loses, Gomez said, the case is likely to end up in the Supreme Court.

Rutgers instituted the mandate in April 2021, four months after the vaccines became available and three months after the university informed students and staff that it would not mandate vaccination.

The policy remains in place, requiring all students to be vaccinated and boosted and that they provide documentation of their vaccine status to the university.

The lawsuit names Rutgers University, its board of governors, Rutgers President Jonathan Holloway and others.

On Aug. 30, 2021, CHD filed a temporary restraining order against Rutgers seeking to prevent the university from coercing students, including those attending class remotely, to get the vaccine by blocking the email accounts of unvaccinated students.

Gomez explained that since the plaintiffs gave their briefing in federal court, in early 2022, the Supreme Court issued an injunction against the Occupational Safety and Health Administration (OSHA) vaccine mandate. Following the injunction, OSHA scrapped the mandate.

That ruling found that OSHA was never given the power to issue the mandate. This case similarly argues that Rutgers and New Jersey colleges do not have this power.

Since CHD filed the brief, more studies have demonstrated that the COVID-19 vaccines do not prevent transmission, and there are reports of numerous injuries and safety risks, particularly for college-aged adults and children.

In November 2022, Rutgers announced that it was partnering with Pfizer on a new clinical trial to evaluate the safety and efficacy of the bivalent COVID-19 vaccine in children under age 5.

This was the latest evidence of Rutgers’ conflicts of interest related to its COVID-19 vaccine policies, The Defender Reported.

The original lawsuit pointed out that Rutgers was selected by all three vaccine manufacturers — Pfizer, Moderna and Johnson & Johnson — to run clinical trials on the vaccines.

The lawsuit alleged that Rutgers stood to benefit financially if more people were required to take the vaccines.

Peter Cordi, one of the Rutgers students who was a party to the lawsuit, said it was “incredibly unnerving” that the university would prioritize “greed and ties to Big Pharma … over our safety and free will.”