Trust in science might never be restored in people who lost their livelihood to unscientific lockdowns or vaccine mandates, but if public health officials want to have any hope of earning the public’s trust, they must start by telling the truth. 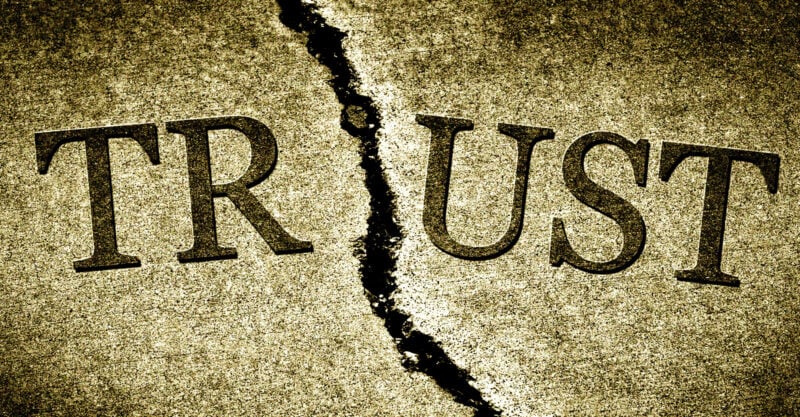 On April 2, 2020, a paddleboarder was chased by authorities and taken into custody.

This event should have caused unanimous outrage over the absurdity of what happened — law enforcement arrested a lone paddle boarder on Santa Monica Bay for the crime of “flouting coronavirus closures.”

Traditional voices that could have questioned unscientific authoritarian policy instead provided cover. The Los Angeles Times justified law enforcement’s ridiculous response by quoting a scientist who made the claim (presumably with a straight face):

“..[SARS-CoV-2] could enter coastal waters and transfer back into the air.”

Setting aside the absurdity of this and every other justification for closing beaches, hiking trails and parks, think of the narrative it perpetuated — the virus is so insidious that even those who dared to paddle board alone on the ocean might somehow spread it to the rest of us.

The paddler’s arrest was an early indication that something had changed in our country.

A “new normal” was spawning from the chaotic, unscientific, politicized pandemic messaging mainly coming from biased news media and the once venerable Centers for Disease Control and Prevention (CDC) and Dr. Anthony Fauci.

The result was bitter contempt between two sides of the COVID-19 debate that metastasized into a deep distrust for science.

In an understatement of the century, CDC Director Rochelle Walensky recently summed up her agency’s role in promoting distrust in science by stating that they did not “reliably meet expectations.”

Thus, it’s pretty clear that for their part, nothing much will change.

Fauci proclaimed that because he “represents science” any criticism of him is a direct attack on science. Translation, we shouldn’t expect any productive capitulation from him either.

Although the CDC acknowledged playing a role in the growing distrust in science, none of their professed forms of atonement, such as promising to share data faster and doing a better job of translating science into policy will restore trust without a process that includes honest debate.

Over the past two years, the CDC cherry-picked data from articles rushed to print in their own journal (Morbidity Mortality Weekly Report) to justify a lot of bad policy, including masking schoolchildren, which is still happening today, or pushed the completely unscientific assertion that vaccine immunity is superior to natural immunity.

On the other hand, they buried data showing that upon reinfection, vaccinated people without prior COVID-19 diagnosis were at greater risk of hospitalization than the unvaccinated with prior COVID-19.

Walensky also boldly stated, “Our data from the CDC today suggests that vaccinated people do not carry the virus, don’t get sick.”

The untruthful messaging that vaccination stopped infection and transmission was justification for an appalling trend of people mocking the COVID-19-related deaths of the unvaccinated.

It’s unlikely the families targeted by such attacks will hear any apologies, even though Fauci’s four shots did not protect him from reoccurring COVID-19, or that Dr. Deborah Birx admitted that inflated vaccine efficacy claims were based on hope, not science.

At the start of the pandemic, Fauci told us not to buy masks because they do not work.

When the politics changed, Fauci reversed himself and became the proponent of wearing not just one mask — but several. Fauci’s excuse for the flip-flop was his only truth on the matter — he admitted that he lied, albeit “nobly.”

For his encore, Fauci confidently opined on the level of vaccine uptake required for herd immunity. Eventually, he admitted to guessing at numbers to frighten people into compliance.

To be clear, Fauci used deception, not science, to support his version of public health policy.

Anybody who was “on the fence” about trusting Fauci, the self-proclaimed embodiment of “the science,” should have been forcefully pushed off after his attempts to obfuscate when testifying to Congress on whether the U.S. government-funded “gain of function” research that very likely created SARS-CoV-2.

The loss of trust was greatly amplified by activist scientists and most of the news media.

Fauci refused to say anything critical of the nationwide social justice protests that might have discouraged people from participating in behaviors known to spread respiratory viruses.

How could scientists determine whether the protests caused any disease transmission or death if contact tracers were not allowed to ask if someone attended a protest?

The weaponization of science to censor, persecute, delegitimize and threaten those who had differing opinions has never happened on this scale in this country.

Even President Biden capitalized on the politicization of mask-wearing by accusing the elected leader (and by extension the citizens) of Texas of “Neanderthal thinking” for removing the mask mandate in 2021.

Meanwhile, states such as California and New York were praised for “following the science.”

A simple comparison of the epidemic curves between these states did not justify the divisive rhetoric (Fig. 1).

But rather than have these conversations, it was easier to just slander dissenters and censor intelligent discussion.

As the old saying goes, “a lie is halfway around the world before the truth gets its boots on.” Thankfully, the truth finally has its boots on and is catching up on many fronts, such as the questionable effectiveness of mask mandates.

The “Neanderthal thinking” jab was uttered around the time the news media, outraged by Governor Ron DeSantis’ steady leadership in Florida, hoped to get “Ron DeathSantis” trending on social media.

Not surprisingly, the data told a different story about Florida (Fig. 2). It’s clear that “follow the science” was just a slogan. Politics, lies and vindictive moral superiority are baked into our nation’s COVID-19 policy.

Trust in science might never be restored in people who lost their livelihood to unscientific lockdowns or vaccine mandates.

But, here’s some advice for people like Walensky and Fauci to get back some of the trust.

Let’s hope we’ve learned from our mistakes, because given the state of the world right now, we cannot afford to repeat them.

Pat Fidopiastis is a Professor of Microbiology at California Polytechnic State University.