How to Prepare for the Coming Water Wars

One of the most important preparations you can make is to secure a supply of potable water, such as a large cistern to collect rainwater. 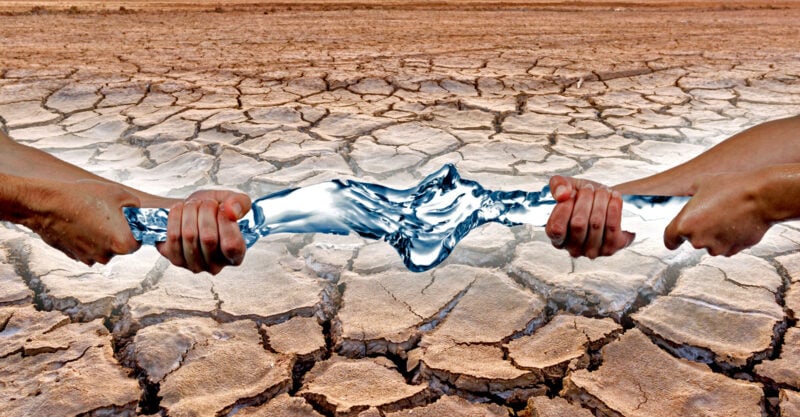 Historic droughts and threats of water shortages are occurring around the world, as media reports highlight rivers — such as the Loire, Po and Danube in Europe — reaching historic lows.

In China, a double threat of heat and lack of rainfall has led portions of the Yangtze River basin to go dry, affecting not only crops but also the drinking water supplies of people and livestock.

In the U.S., the Colorado River is at “critical levels,” leading officials from the U.S. Interior Department to state that water use in the basin must be reduced “in order to avoid catastrophic collapse of the Colorado River System and a future of uncertainty and conflict.”

Toward that end, Washington officials have now stepped in, announcing that certain water supplies to U.S. states and Mexico would be cut.

Much of the crisis is blamed on human activities, but as James Corbett covers in “The Corbett Report,” they may not be the activities you’re thinking of, like driving cars but, rather, activities that are much more nefarious, like the intentional creation of a water crisis in order to gain totalitarian control.

The history of climatic warfare

While geoengineering, including spraying sulfate aerosols into the Earth’s stratosphere in order to modify the climate, is often still talked about as though it’s straight from a science fiction movie, weather modification techniques have been used for military purposes for some time.

Sometimes referred to as weather warfare, the notion that humans could control Mother Nature became a reality in 1946, when scientists working with the General Electric Research Laboratory released dry ice into clouds, creating the first human-made snowstorm.

As noted by Smithsonian Magazine:

“After the experiments of G.E.’s Research Laboratory, there was a feeling that humanity might finally be able to control one of the greatest variables of life on earth.

“And, as Cold War tensions heightened, weather control was seen by the United States as a potential weapon that could be even more devastating than nuclear warfare. …

“In August of 1953 the United States formed the President’s Advisory Committee on Weather Control. Its stated purpose was to determine the effectiveness of weather modification procedures and the extent to which the government should engage in such activities.”

It wasn’t long after that the U.S. military began to use weather modification practices in warfare, including during the Vietnam War.

“Unsurprisingly, the idea was put to active military use almost immediately.

“From 1967 to 1972, the US Air Force ran Operation Popeye, a highly classified rainmaking program deployed in Southeast Asia ‘in an attempt to slow the movement of North Vietnamese troops and supplies through the Ho Chi Minh trail network.’

“The program was so classified that even President Nixon’s Defense Secretary, Melvin Laird, didn’t know of its existence until it was reported in the press. So, who went over the Secretary of Defense’s head to authorize and coordinate a scheme to weaponize the weather? Why, Henry Kissinger, of course. …

“Don’t worry, though. The revelation of the program caused such international outrage that the UN introduced a convention in 1977 prohibiting the use of environmental modification technology in warfare.

“The US ratified that convention in 1980, so no one has ever tried to modify the weather for warfare again. (Would world leaders ever lie to the public about something like that?)”

While climatic warfare was supposed to have been phased out in 1980, weather modification — for various purposes — has been picking up steam around the globe.

More than 50 countries worldwide already participate in one type of weather modification known as cloud seeding.

The prospect of using cloud seeding to increase rainfall is its most popular usage. In the U.S., about $15 million is spent on cloud-seeding projects annually, which pales in comparison to the $100 million a year spent in China. Still, in the U.S. cloud seeding has grown by one-third in the last 10 years.

There are a number of different ways that cloud seeding can work, but typically dry ice (frozen carbon dioxide) pellets or silver iodide are applied to certain clouds to modify their output.

Seeding agents may be applied to clouds from the ground but, most often, aircraft are used to apply the materials to the clouds.

This occurs either by releasing the seeding agent below the cloud into its updrafts or by dropping the seeds directly into the upper regions of the clouds.

China recently made headlines for using seed clouds to induce rainfall over the Yangtze River, and it also used cloud seeding to ensure dry weather during the 2008 Beijing Olympics.

In Wyoming, the Wyoming Weather Modification Pilot Program conducted a randomized cloud-seeding program, which found that seeding increased snowfall by 5% to 15% under ideal seeding conditions.

In North Dakota, meanwhile, the North Dakota Cloud Modification Project reported that cloud seeding produces an estimated 5% to 10% additional rainfall annually in the project area while reducing crop hail losses by 45%. As for costs, they say it only costs 16 cents per acre to enhance rain and suppress hail.

As you can imagine, aside from the benefits of protecting water supplies or the military applications, there are many people who have their hands in the pot when it comes to benefiting from weather modification.

“So many events in the course of human activity are predicated on short-term weather and long-term climate phenomena that the ability to determine (or even influence) either could be extremely valuable.

“So it should not be surprising that a market has evolved for ‘weather derivatives,’ effectively allowing large financial institutions to make money gambling on the weather.

“And it should also come as no surprise that this market was largely pioneered by that infamous globalist-connected insider corporation, Enron.”

The practice is not without controversy, however. Potential consequences of cloud seeding include environmental impacts downwind of target areas, which may have a negative impact on others — including those across political boundaries.

Could it be, also, that global elites have already harnessed this technology for their own purposes of population-level control?

“Instead, they can safely blame the current water shortages on the globalist bogeyman … It’s all just a coincidence that we’re plunging into an age of water shortages, droughts, famine and pestilence, guys. And the answer to this crisis is more weather modification!”

‘A crisis by design’

In 2018, researchers from the European Commission’s Joint Research Center suggested that competition over limited water resources — or “hydro-political issues” — would be the driver of future wars.

“Although water issues alone have not been the sole trigger for warfare in the past, tensions over freshwater management and use represent one of the main concerns in political relations between riparian states and may exacerbate existing tensions, increase regional instability and social unrest.”

“The wars of the future,” the New York Post wrote, “will be fought over water not oil.” Indeed, other than air, there is no resource as precious as water, and if it becomes scarce, those who control it will retain ultimate power.

This, Corbett believes, is part of the master plan:

“But now let’s entertain for a moment this harebrained, cockamamie, tinfoil wing nut idea that perhaps — just perhaps — the global climactic events taking place at the moment (including the widespread water shortages taking place across the world) are not the result of your carbon footprint.

“What if — and I know I’m out on a limb here — they were being deliberately engineered with the types of weather modification technology that we know the US military and other countries around the world have been actively studying for at least 80 years now? What would that mean?

“Well, it would certainly create a convenient case for the UN and other would-be world controllers to step in and start restricting productive human activity in the name of saving us from the weather gods. Climate lockdowns to save the day! …

“Sound farfetched? Well, as even mainstream commentators are starting to note, the water supply crisis is not simply happening by chance. It is the result of carefully planned government actions, inactions and restrictions. …

“The answer is obvious: the water shortage is a crisis by design, like the food crisis and the various geopolitical crises and the economic crisis …

“And it’s designed to justify more government control over you and your life and, in the end, to corral you into tightly controlled urban centers where your access to the necessities of life can be turned off.”

How to secure your own water for emergencies

One of the most important preparations you can make is to secure a supply of potable water, as you can survive far longer without food than you can without water. An ideal system to consider, if you have a garden, is to install a large cistern to collect rainwater.

Since I have a full acre of land that I grow food on, I have a 5,000-gallon cistern that collects rainwater from the gutters on my roof. This serves to augment my irrigation system but is also a large emergency source of water. Another strategy is to install a series of connected rain barrels to your gutters.

A system like this can provide you with a source of water indefinitely, provide there isn’t a long-term drought. Just be sure to keep the water clean, using a combination of filters — a leaf diverter as well as a screen on the inlet going into the barrel — and treatment as follows:

The best-case scenario is that you install such a system and don’t need it. In that case, you can still use the water for your garden.

But in the worst-case scenario, in which war erupts over water rights and those in power attempt to limit or, worse, eliminate, your supply, you’ll have a backup ready.