5 Reasons Plastic Recycling Is Nearly Impossible — and Getting Worse

According to the 2022 Greenpeace report, the amount of plastic recycled dropped to a new low of between 5-6%, as recycling companies greenwash consumers, promising to recycle plastics because it's politically correct. 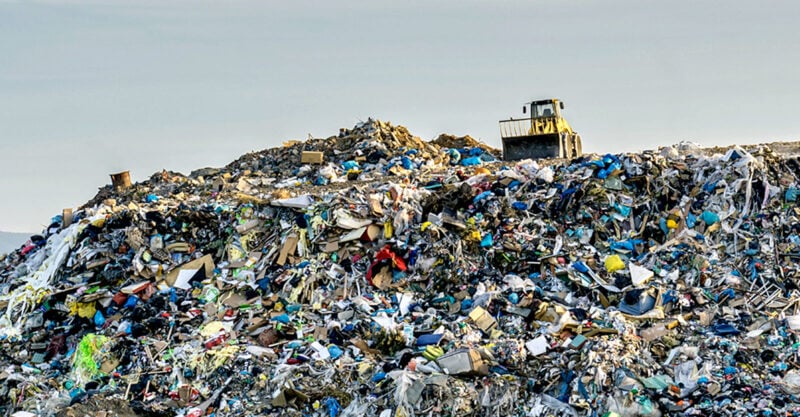 Recycling is impractical and, according to Greenpeace, most plastics in the recycle bin are going to landfills.

The report pulled data from Bennington College’s Beyond Plastics report released in May. Researchers from the college revealed that the amount of plastic recycled had dropped to a new low of between 5% and 6% — and that number was likely lower based on lost plastic collected under the pretense of recycling.

They expect this percentage to drop even further as the amount of plastic in production continues to rise. The full picture of plastic recycling has not ever lived up to the promises made by the plastic industry, and likely never will, according to the Beyond Plastics report.

For example, not one type of food service plastics has ever been recyclable according to the legal definition from the Federal Trade Commission (FTC) Green Guide, despite food companies claiming it is, such as the Starbucks polypropylene strawless cup lids.

Greenpeace describes the FTC Green Guide requirements in the 2020 report, writing that claims plastics can be recycled must be made on the existence of established programs for collection, separation and recovery.

Yet, there are no established programs to separate and recover these plastic lids, so the advertising claim violates the FTC requirement.

According to NPR, the 2022 Greenpeace report found that not even soda bottles — the most prolific item found in recycling bins — meet the threshold set by The Ellen MacArthur Foundation New Plastic Economy Initiative for being called recyclable.

The Initiative sets a threshold of a 30% recycling rate to reach that standard. Lisa Ramsden, senior plastic manager for Greenpeace USA spoke with an NPR reporter, saying:

“More plastic is being produced, and an even smaller percentage of it is being recycled. The crisis just gets worse and worse, and without drastic change will continue to worsen as the industry plans to triple plastic production by 2050.”

According to NPR, waste management companies say collecting and sorting plastic is expensive. Added to this, there are thousands of different types of plastics that cannot be melted and recycled together. Greenpeace scientists have also discovered that reusing plastic increases its toxicity to the environment and humans.

On the other hand, producing new plastic is cheaper. When one Oregon sanitation company told customers they could only take soda bottles and jugs in their recycling program, consumers became upset. General manager Trent Carter told NPR he wanted to be transparent with their consumers.

“Politically it’s easier to just say ‘Gosh, we’re going to take everything, and we think we can get it recycled,’ and then look the other way. That’s greenwashing at its best,” he said. The Greenpeace 2022 state of plastic recycling report lists five major reasons why plastic recycling fails.

Collection — Over 33 million people in the U.S. use and dispose of single-use plastics each year. According to Greenpeace, even the recycling industry admits that collection from consumers is a problem.

Greenpeace also notes that volunteer cleanups, often supported by the plastic industry, is more proof that collecting trillions of pieces of plastic waste is nearly impossible. One nonprofit organization, Keep America Beautiful, is funded by Dow and McDonald’s and is famous for volunteer-led cleanups to collect plastic pollution.

Yet, the continued need for these cleanups demonstrates that recycling programs cannot keep plastic out of the environment.

Mixed plastic — Even if plastic could be collected effectively, Greenpeace says it is likely a waste of money. This is because mixed plastic waste cannot be recycled concurrently and sorting trillions of pieces to be reprocessed is “functionally impossible” since different plastics have different characteristics, melting points, colorants and chemical additives.

Reprocessing creates pollution — During recycling, microplastics are generated and discharged into the environment. Recycling is also toxic to workers in recycling plants.

In 2021, Canada’s National Observer reported that when plastic products are broken down or incinerated, toxins are released into the environment, including endocrine disruptors and cancer-causing chemicals. These contaminate the people in the recycling plant and the environment.

Economics — Greenpeace notes that collecting, sorting, transporting and safely reprocessing plastic waste is exorbitantly expensive. With a hike in diesel fuel, one Midwest recycler reported that transporting the plastic waste to Canada was “two to three times more expensive than it was six months ago.”

Publicly, the oil and gas industry lobbyists have claimed that 100% of plastic can be recycled by 2040. Yet, they are unable to explain how they will reach that recycling rate.

Additionally, an NPR investigative report, the gas and oil industry understood as early as the 1970s that recycling plastic was not an economical option.

NPR also reports that oil and plastic industry lobbyists have resisted legislation where consumers are paid to bring their plastic bottles in for recycling, so they are sorted at the source and thus lowering the cost.

The reduction in the demand for oil during the COVID-19 pandemic, in addition to the push to promote electric vehicles, has meant that the oil industry may never fully return to pre-pandemic levels.

Although plastics use a relatively small number of petrochemicals for production, experts believe that it may be the largest source of new demand for oil. If this fails, then 2019 was likely the peak of fossil fuel demand.

While the world drowns in plastic and microplastic, a Carbon Tracker report released in September 2020 argues that plastic is increasingly being scrutinized and regulated and as the public turns against its use, growth in the industry could fall to zero.

We have a dangerous addiction to plastic

Although a reduction in plastic industry growth to zero would be a boon for human health and the protection of the environment, it’s hard to imagine that the strength of the oil and plastic lobby will not find a loophole through which they can continue to produce environmental toxins that damage wildlife and human health.

According to Environmental Health News, “Two-thirds of all plastic ever produced remains in the environment,” which helps explain why tap water, bottled water, sea salt and a variety of seafood all come with a “side order” of microplastic.

And in fact, as you survey your own home, grocery store shelves, and big box stores, it’s apparent that our society has an addiction to plastic.

BPA and phthalates are endocrine-disrupting chemicals found in plastics, which are particularly concerning for young children and pregnant women since they interfere with normal physiology and maturation, even in minute amounts.

It’s estimated that it can take a plastic bottle 450 years to break down in a marine environment and even then, it never fully goes away.

It just breaks down into microplastics that persist indefinitely. These tiny pieces migrate up the food chain as they are consumed by fish and other wildlife.

It is extraordinarily challenging to avoid plastic as exposure routes include air, dust, water, food, food packaging, bottles and any number of household items. Even cashier receipts contain BPA that enters your bloodstream through your skin.

Microplastic in 77% of blood samples tested

Another indication that recycling programs for plastic products have not been successful is the data released by researchers in the Netherlands that showed microplastic particles in 77% of the blood samples taken from 22 healthy human volunteers.

This was the first time that microplastics had been detected in human blood, according to an ecotoxicologist at Vrije Universiteit Amsterdam in The Netherlands.

The researchers described particles that were small enough to be absorbed across cell membranes. The mean concentration in the blood was 1.6 µg/ml, “showing a first measurement of the mass concentration of the polymeric component of plastic in human blood.”

During testing, the researchers use steel syringe needles and glass tubes so that plastic would not be introduced into the samples.

Some samples contained up to three different types of plastic. Past studies have also found microsized plastic particles in human feces, human placental tissue and a disturbing amount of plastic in baby poop.

The vast number of products encased in plastic, in combination with data showing microplastics in human blood, placental tissue and infant feces, demonstrates the considerable failure of the plastic recycling program.

Global plastic production doubled from 2000 to 2019, reaching 460 million tons, according to the Organisation for Economic Co-operation and Development.

It’s also necessary to consider thin plastic fibers released from clothing during washing and microbeads found in facial scrubs and toothpaste that travel through the wastewater treatment plants and clog the waterways.

One 2015 study estimated there could be as much as 236,000 tons of microbeads filling the oceans.

According to another study, the average person swallows an estimated 68,415 plastic fibers each year just from the dust landing on their plates during meals.

Plastic pollution is also accumulating on farmland. The annual release of plastics to land is estimated to be four to 23 times greater than that released to oceans.

According to the researchers, this is “an alarmingly high input,” exceeding the total accumulated burden of 93,000 to 236,000 tons of microplastics present in ocean surface water around the globe.

Recycling is nearly impossible, and production has not slowed. However, as you take steps to reduce your exposure to plastic, you are also voting with your pocketbook by lowering demand.

Consider using reusable bags at the grocery store, bringing your own leftover containers to restaurants, avoiding disposable utensils, storing food in glass containers at home and opting for nondisposable razors and cloth diapers.