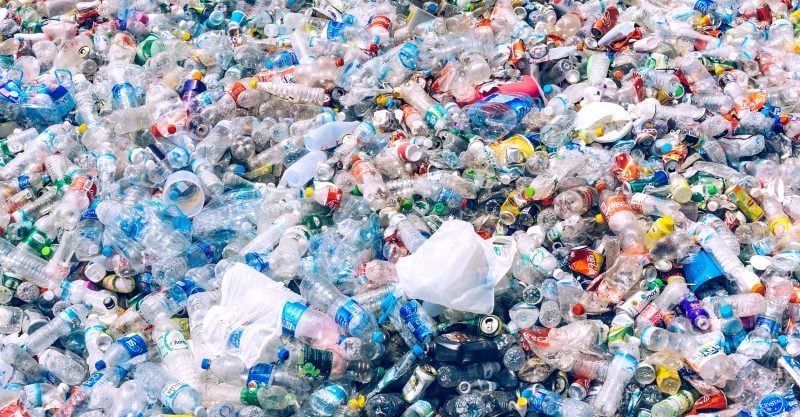 As oil companies’ profits sink amid decreasing demand for their product, oil and gas giants are setting their sights on a new market — they’re pouring billions of dollars into new plants designed to produce plastic from chemicals sourced from fossil fuels.

According to the Center for Environmental International Law more than 99% of plastic is made from chemicals sourced from fossil fuels. A recent study published by Environmental Research Letters identified 88 petrochemical projects in the planning or development phase along the Gulf Coast. If all are completed, the combined emissions output could reach 150.8 million metric tons, the equivalent of 38 coal plants.

By 2030, emissions from global plastic production and incineration could reach 1.34 gigatons annually, the equivalent amount of carbon dioxide released by 295 coal plants each year.

“Plastic is fossil fuel in another form. Everything that happens before you see that plastic on the shelf is emissions intense,” said Steven Feit, a lawyer of Center for Environmental International Law. “It releases all manner of pollutants and toxic chemicals.”

There are more than 30 plastic plants in the pipeline, from the Ohio River Valley to the Gulf Coast, as oil companies aim to turn the current oversupply of fracked ethane gas into polyethylene, a type of plastic.

For example, 25 miles northwest of Pittsburgh, near the Ohio border, Shell is constructing a massive $6 billion petrochemicals complex. The 386-acre property is fed by a 98-mile pipeline system that will deliver up to 100,000 barrels of ethane per day to the “cracker” plant, which will “crack” ethane molecules apart to produce plastic for phone cases, auto parts, bottles, bags, toys, food packaging and other plastic products.

According to Popular Science, the plant will have its own rail system with 3,300 freight cars and will produce more than a million tons of plastic each year — along with millions more tons of pollution.

Shell’s cracker plant will be allowed to produce more than 2 million tons of carbon dioxide each year, 152 tons of ammonia and more than 522 tons of volatile organic compounds that can cause nervous system damage, according to a report by Pittsburgh Action News.

In addition to air pollution, the plant will produce hard-to-recycle plastic, most of which will end up as waste in landfills.

Chemist and environmental advocate Wilma Subra has studied cracker plants in Louisiana and the industrial area between New Orleans and Baton Rouge known as “cancer alley.” She projects Shell’s plastics plant will lead to more petrochemical plants in the area, severe air emissions and the development of a Pennsylvania cancer alley that will have a dramatic impact on public health.

“The pollution we have here was caused by previous plants, and now Shell is coming to add more on top of that. They will make their money, and then they will pack their bags when the money stops coming in, leaving behind the pollution.”

The Shell plant is just one of many plastic plants that have been built or are in development in the U.S. In 2017, DowDuPont became the first chemical giant to start up a major ethylene complex along the Texas Gulf Coast.

In 2019, Chevron Phillips Chemical made a deal with Qatar Petroleum to develop its second plastics plant — an $8 billion plant on the Gulf Coast capable of processing 2 million metric tons of ethylene a year and 1 million tons of ethylene into polyethylene, the world’s most common plastic. The plant is scheduled to open in 2024.

ExxonMobil, the largest publicly traded international oil and gas company, started construction of its multi-billion dollar plastics plant in 2019 and announced a $2 billion expansion at its chemical plant in Baytown, Texas, to begin mid-2021.

In 2019, ExxonMobil partnered with Saudi Arabia Basic Industries Corp. to build a $10 billion chemicals and plastics complex in Corpus Christi, Texas. The joint venture with the Saudi Arabian-owned company will create the largest steam cracker plant, two polyethylene units and a monoethylene glycol unit to be finished in 2022.

Along the Mississippi River corridor’s “cancer alley,” seven new petrochemical facilities and expansions have been approved since 2015, threatening impoverished and polluted neighborhoods.

In order to sell people on plastic, oil and gas companies spent millions of dollars intentionally misleading the American public about the causes of plastic pollution. They also falsely advertised the recyclability of their products, according to an investigation by NPR and PBS Frontline.

The news sites investigated internal documents and interviewed top former officials of the oil industry. They found that the industry “sold the public on an idea they knew wouldn’t work — that the majority of plastic could be and would be recycled — all while making billions of dollars selling the world new plastic.”

Larry Thomas, former president of the Plastics Industry Association, also shared his take on plastics with NPR. “If the public thinks that recycling is working, then they are not going to be as concerned about the environment,” he said.

According to a report by Carbon Tracker, only about 5% of the world’s plastic actually gets recycled. In the U.S., less than 10% of plastic is recycled. Another 15% is burned to generate energy and the rest ends up in landfills where it takes hundreds of years to break down.

If this trend continues, scientists project that roughly 12 billion metric tons of plastic waste will be in landfills or the environment by 2050 — the equivalent weight of 35,000 Empire State Buildings.

Dangers of plastics to the environment

According to an exposé in Rolling Stone, plastic pollution is global, impossible to fully remediate and threatens to disrupt everything from oceans to carbon in the atmosphere.

A report from Oceana revealed that nearly 1,800 marine mammals and sea turtles had swallowed or become entangled in plastic along American coastlines since 2009. Of those animals, 88% were listed as endangered or threatened species under the Endangered Species Act.

Plastic accumulates in the food web appearing in seafood, table salt and even bottled water. It’s mixed with colorants, flame retardants and plasticizers. As plastic breaks down over a long period of time, it absorbs toxins from the environment, including polychlorinated biphenyls, or PCBs.

Joe Vaillancourt is CEO of a company that refines plastic from curbside recycling into fuel. In one small 10-pound batch, he found a thousand different chemicals, many of which have been linked to cancer and severe health problems.

There are more than 100 concerning chemicals in air pollution from cracker plants, including carcinogens like benzene, toluene, ethylbenzene and xylene that can cause health problems in neighboring communities, according to the Center for Biological Diversity.

Numerous lawsuits initiated by environmental advocates are poised to take on plastic plants and force the U.S. Environmental Protection Agency and other agencies to implement regulations.

The plastics industry is ultimately “going to have to deal with the sticker shock that they are now responsible for and they’re going to have to pay to keep plastics out of the environment,” said Rep. Alan Lowenthal of California.

“What we have in plastic is something that has made our lives more convenient and easier. But unless we figure out how to keep this out of the waste stream, it’s just going to kill us.”