Pfizer and Marvel this month released a customized Avengers comic book that urges people to become an “everyday hero” by staying up-to-date with the latest Pfizer COVID-19 booster shots. 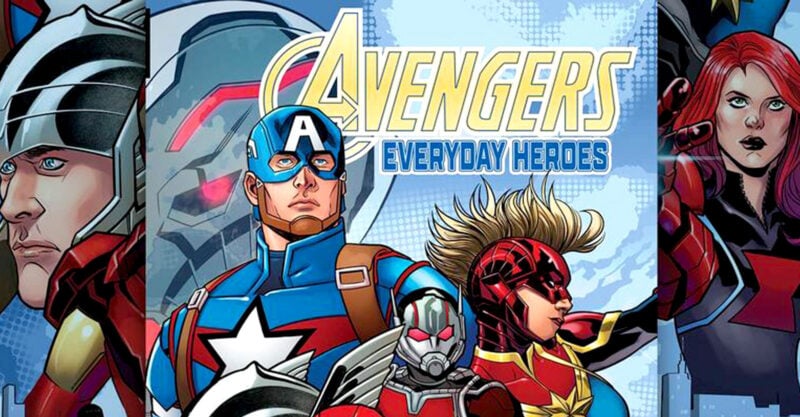 Pfizer and Marvel’s “Avengers” are co-promoting Pfizer’s COVID-19 booster vaccines with the Oct. 4 release of a customized comic book.

Just as the “Avengers” repeatedly kept the world safe from the fictional supervillain Ultron, people need to protect themselves by updating their COVID-19 vaccination with the latest booster, according to the promotional comic.

Pfizer announced the new comic book in a tweet:

When Ultron wreaks havoc, the Avengers act as the first line of defense. People can help protect themselves by staying up to date with COVID-19 vaccinations. Head to https://t.co/PfNUYTZlkj to get a first look at Pfizer, BioNTech, and Marvel’s comic book! pic.twitter.com/hwhRateYIB

The new comic, “Everyday Heroes,” shows Ultron — who represents COVID-19 as it keeps evolving — attacking and being successfully fended off by the Avengers — who represent the different Pfizer vaccinations — while a grandpa and his family are waiting at a nearby clinic to get a COVID-19 vaccine.

The story concludes with pictures of the Avengers and the family displaying bandages on their left arms, showing they got a Pfizer shot.

In addition to the superhero scenes, Pfizer added a page in the comic both before and after the story that shows people of different professions.

“What makes them everyday heroes?” one of the pages reads. “They know what to do to help defend against COVID-19.”

And the comic includes a banner — accompanied by a scannable QR code containing COVID-19 vaccination information provided by Pfizer — that reads, “Vaccinate and stay up-to-date with the latest recommended booster and be an everyday hero!”

The marketing collaboration comes amid sluggish uptake in the U.S. and Europe of Pfizer’s fall Omicron-specific booster shots, according to the Daily Mail, which on Oct. 6 reported that fewer than 1 in 20 eligible Americans had received the shot.

According to the most recent data from the Centers for Disease Control and Prevention (CDC), only 7.6 million Americans have opted to get the updated booster dose as of Sept. 28 — almost one month since the U.S. Food and Drug Administration (FDA) on Aug. 31 granted Emergency Use Authorization for the new Pfizer and Moderna boosters and the CDC’s Advisory Committee on Immunization Practices on Sept. 1 authorized the shots.

Citing data from the European Centre for Disease Prevention and Control, Reuters on Oct. 7 reported that in the EU, weekly vaccine doses administered were ranging from around 1 million to 1.4 million in September.

Pfizer’s enlistment of Marvel’s Avengers comes after the U.S. Congress opted to not pass additional COVID-19 funding, signaling that the U.S. government will no longer be the primary purchaser of its COVID-19 vaccines.

Pfizer CEO Albert Bourla downplayed the potential negative impact the government decision might have on his company’s bottom line, stating that Pfizer’s shift into the private market will allow the drugmaker to be “even more competitive” and that its commercial skills are “even better suited” in an open market than in a government-contracting model.

Last month, Pfizer and Moderna aired new direct-to-consumer (DTC) TV commercials promoting their products — but they had to “play with cool with the branding side of things” because neither company’s fall COVID-19 booster vaccine has full FDA approval.

On Sept. 8 the day before the NFL season kicked off, Pfizer launched its booster ad, known as “More,” which features a narrator, speaking in rhyme, about the “normal” things that happen in everyday life with the tagline, “the more you want to do, the more we want to do.”

Moderna also aired a booster ad in time for the NFL season.

Moderna’s 15-second ad, “Get Boosted this Fall,” features text on a colored background that states, “We’re sick of COVID, but we don’t want to get sick with COVID, either” and then urges people to get their boosters.

Moderna’s logo is visible at the bottom throughout the ad, and the company carries over part of its logo within the text as an extra layer of promotion.

In the second quarter of 2022, Moderna generated $4.7 billion in sales, a 9% increase over the same period last year.

Pfizer’s revenue grew by 47% compared to the second quarter last year, to $27.7 billion, and the company’s net income increased to $9.9 billion — a 78% increase over the same period during 2021.

The U.S. and New Zealand are the only two countries that allow DTC advertising of pharmaceuticals.

In both countries, people reportedly take 50% more pharmaceuticals than in other nations. Yet Americans are sicker and more economically disadvantaged when compared with people in 10 other wealthy countries, according to the latest Commonwealth Fund report.

The FDA first authorized Pharma advertising in 1938, following the passage of the Federal Food, Drug, and Cosmetic Act. In 1962, Congress formally granted the FDA statutory authority to regulate prescription drug labeling and advertising.

In 1969, the FDA issued final regulations for prescription drug advertising. The regulations state that ads must not be false or misleading, must present a “fair balance” of information describing both the risks and benefits of a drug, must include facts that are “material” to the drug’s promoted uses and must include a brief summary mentioning every risk described in the product’s labeling.

The FDA further relaxed its regulations, in 1995 and in 2004, leading to a boom in pharmaceutical advertising. As the FDA loosened regulations, the agency also took fewer enforcement actions.

In 2005, numerous physicians in the American Medical Association (AMA) drafted a proposal to ban DTC advertising, but the proposal failed.

A decade later, the AMA again called for a ban. Members drafted a new policy, convening a physician task force and launching an advocacy campaign to promote prescription drug affordability and demand greater transparency in prescription drug prices and costs.

However, such efforts appear to have waned in recent years. The AMA’s current ethical code regarding DTC advertising is ambivalent about the marketing strategy and states physicians should “encourage and engage in studies that examine the impact of DTC advertising on patient health and medical care.”

The study’s other key findings included: