As the “Freedom Convoy” of truckers protesting Canada’s vaccine mandates rolled through southeast Alberta, Canadian government officials reiterated support for the policy that requires Canadian and U.S. truckers to show proof of vaccination in order to cross the border. 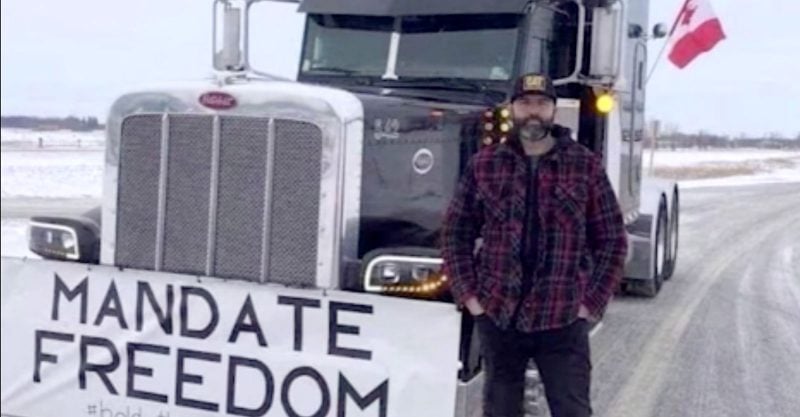 “I regret that the Conservative Party and conservative politicians are fear-mongering to Canadians about the supply chain, but the reality is that vaccination is how we’re going to get through this,” Trudeau told reporters who asked if the mandate policy could disrupt supply chains.

“We are taking our fight to the doorsteps of our federal government and demanding that they cease all mandates against its people.”

The 11,000-truck, 93-mile long convoy is traveling from the country’s westernmost province, British Columbia, toward Ottawa, the country’s capital, where they will hold a demonstration on Jan. 29. The truckers said they will not leave until the mandates are lifted.

The Toronto Star reported the convoy drew “large crowds of supporters from across the region, many holding signs and waving flags.”

As of Jan. 15, the Canadian government required all truck drivers entering Canada from the U.S., regardless of citizenship, to be fully vaccinated against COVID. Any driver who cannot show proof of vaccination will be denied entry and placed in quarantine for two weeks.

The U.S. government implemented the same policy last week on the American side of the border.

“It’s not about anti-vaccination — that’s everybody’s personal choice — this is about the mandates,” said Barber.

“The straw that broke the camel’s back was the U.S.A. border for commercial drivers, and you have to show the COVID passport — a lot of guys are going to lose their jobs over that.”

Barber, a truck driver of 28 years, said he himself is vaccinated, but he wants to support fellow drivers who are not.

“This (COVID-19 vaccination) passport has gone too far,” said Barber. “If we can’t get across the border freely, and we’re being forced to [be vaccinated] by the federal government, we can take a stand or we can’t.”

The Canadian Trucking Alliance and the American Trucking Associations said up to 26,000 of the 160,000 drivers who make regular trips across the Canada-U.S. border are likely to be sidelined by the vaccine mandate.

During a press conference Monday, Saskatchewan Premier Scott Moe called the mandate “unnecessary” since many truckers are vaccinated and rapid tests are widely available in Canada.

“It’s an unnecessary policy and it’s one that’s going to have, unfortunately, potentially some significant impacts on us accessing essential services, including food that we need in our communities,” said Moe.

Lantsman claimed the policy would result in the loss of thousands of jobs and “empty shelves in Canadian retail sectors.”

Neither Trudeau nor his ministers have yet presented a plan to deal with potential supply line disruptions, but Tuesday the government and industry allies made clear they weren’t backing down on the mandate.

In an interview with CBC’s Power & Politics, Alghabra said the government is not interested in alternatives like rapid testing for unvaccinated truckers.

He said truckers and the wider industry have had months to prepare for the new regulations and drivers must now get the shot or stop driving over the border.

Industries already affected by a chronic shortage of truckers worry about the economic impact of more driver shortages under the new mandate.

Joel Neuheimer, vice president of the Forest Products Association of Canada, told the Financial Post’s Larysa Harapyn that the trucker vaccine mandate is hurting the fragile lumber supply chain, as prices per 1,000 board feet have topped more than $1,200 from a pre-pandemic average of $300.

“The mandate on Canadian border trips is hurting when our supply chains are extremely fragile,” said Neuheimer.

“We are basically in the Bill Murray classic Groundhog Day,” he added, “where we are continuing to see” the same price cycles and transportation issues repeatedly.

Meanwhile, support along the route seems to be growing with thousands of Canadians gathering on snowy overpasses to cheer on the convoy whose trucks extend an estimated 90 miles past the fog-shrouded horizon.

To date, the GoFundMe page supporting the Freedom Convoy has raised more than $4.5 million to support the fuel needs of the drivers and, potentially, food and lodging.

The GoFundMe page states that all funds go directly to providers of these services for the truckers. However, on Wednesday, GoFundMe put a hold on the funds.

“We require that fundraisers be transparent about the flow of funds and have a clear plan for how those funds will be spent,” Rachel Hollis, GoFundMe’s director of communications said in an email. She said the company is in touch with the organizer.

Daily video documentation of the drive is available at Rebel News.