Two court cases are poised to take on New York City’s COVID vaccine mandates that may leave up to 4,000 municipal workers and 700 educators without jobs. 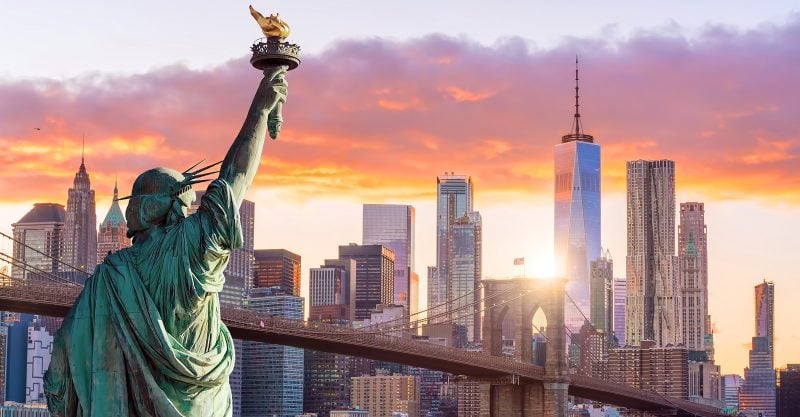 Two court cases are poised to take on New York City’s COVID vaccine mandates that may leave up to 4,000 municipal workers and 700 educators without jobs.

New York City’s mayor plans to fire thousands of municipal workers today for refusing to comply with the city’s COVID vaccine mandates, in what will arguably be the nation’s most extreme example of a workforce reduction tied to a vaccine requirement.

A motion for a preliminary injunction and temporary restraining order were filed today asking a federal district court to intervene and prohibit the enforcement of the mandates while a lawsuit — alleging the city violated the constitutional rights of workers by denying them religious exemptions to the vaccine requirement — is before the U.S. Supreme Court on an emergency petition.

According to The New York Times, Mayor Eric Adams reaffirmed that a vaccine mandate was put in place by his predecessor, Bill de Blasio, requiring city workers to get vaccinated or lose their jobs.

About 4,000 unvaccinated employees in New York City, including police officers, teachers and firefighters, face termination. Most if not all had applied for religious exemptions. This includes 3,000 workers who took unpaid leave instead of getting vaccinated when the city’s mandate went into effect in October 2021 and 1,000 recent hires who failed to submit documentation of their second shots.

In a press conference Thursday, Adams characterized the employees’ termination as “quitting,” saying that they’re choosing to leave their jobs by not following the rules.

“We have to be very clear — people must be vaccinated if they are New York City employees,” Adams said. “Everyone understood that.”

“We are not firing them,” he added. “People are quitting. The responsibility is clear.”

According to the complaint, on July 21, 2021, New York City Mayor Bill de Blasio announced a “Vax-or-Test” policy for the “folks who work in our public hospitals and clinics.” De Blasio said people either needed to get vaccinated or get tested once every week. “It’s a fair choice,” he said.

Two weeks after issuing the Vax-or-Test mandate for all municipal workers, the city enacted new requirements which eradicated the testing option and required vaccination only.

“These mandates were not enacted all at once, but instead seemingly at random, covering only workers in some departments and agencies through a single mandate, and then others through the next,” the complaint states.

“To date, the two mayors and their health commissioner have issued a whopping eighty-three mandates through emergency powers, each covering a different organization or group of individuals.”

Plaintiffs allege that as the city began implementing the mandates, de Blasio admitted during a press conference he intended to “discriminate against employees with unorthodox or personally held religious beliefs,” stating whether one was entitled to religious exemption was not based on their individual beliefs, but whether one is a “​​standing member of a faith that has a very, very specific long-standing objection.”

The complaint alleges the city went a step further and codified its ideas about “what constitutes a valid religious objection to vaccines” into a written policy that discriminated against unorthodox beliefs, implemented through “what can only be described as  heresy inquisitions, with government officials zealously advocating denial of  accommodation because the Pope does not agree with the applicant’s interpretation of what her faith required of her.”

Although the Second Circuit said the policies were blatantly unconstitutional, the city did not revise them but created a second policy — “one for the heretics and one for the lucky few whose religious views lined up with state-approved religions and dogma.”

Plaintiffs claim this was a violation of their fundamental rights.

According to Bloomberg, more than two dozen unions filed lawsuits this week over the requirement for municipal workers, including the Police Benevolent Association, United Federation of Teachers and Uniformed Fire Officers Association.

Other unions took legal action when the city first announced its mandates.

De Blasio’s administration negotiated an agreement with some groups allowing members to stay on unpaid leave and keep their benefits until June if they dropped their lawsuits, but agreements were not reached with other unions, including police and firefighters, who face being terminated on Friday.

According to a press release by Children’s Health Defense, the application seeks to save the jobs of more than 700 NYC educators who are scheduled to be fired Friday for not complying with the city’s vaccination requirement.

“​​For months, DOE’s effort to fire these same teachers has been thwarted by several restraining orders issued by the United States Court of Appeals for the Second Circuit.  One of those orders allowed the plaintiffs and, ultimately, hundreds of educators on unpaid leave, to reapply for religious exemption using what DOE claimed was a ‘new process’ which it asserted complied with federal constitutional requirements.

“However, DOE then granted only one religious exemption and the majority of educators who reapplied, who are not named plaintiffs in these cases, have pending administrative appeals.”

In a statement to The Defender, Mary Holland, president of Children’s Health Defense said:

“CHD is proud to support New York City’s brave first responders and frontline workers. These people worked throughout the pandemic and simply ask to keep their jobs while practicing their faiths. This is a fundamental human right enshrined in our First Amendment. We believe that New York City failed to provide a real process to evaluate these individuals’ sincerely held religious beliefs. They deserve better, and we are hopeful that the courts will serve justice.”

Plaintiffs in the case are represented by Sujata Gibson and Holland, as well as the Nelson Madden Black law firm, which specializes in litigation defending religious freedom.

Most of the plaintiffs in the case are part of the Teachers for Choice and Educators for Freedom, two grassroots organizations of educators fighting for rights and religious freedoms.