In a segment of The Hill’s “Rising,” journalist and political commentator Kim Iversen covered the worldwide protest movement against national vaccine mandates and vaccine passports, a story Iversen argued is getting “almost zero coverage in the American mainstream media.” 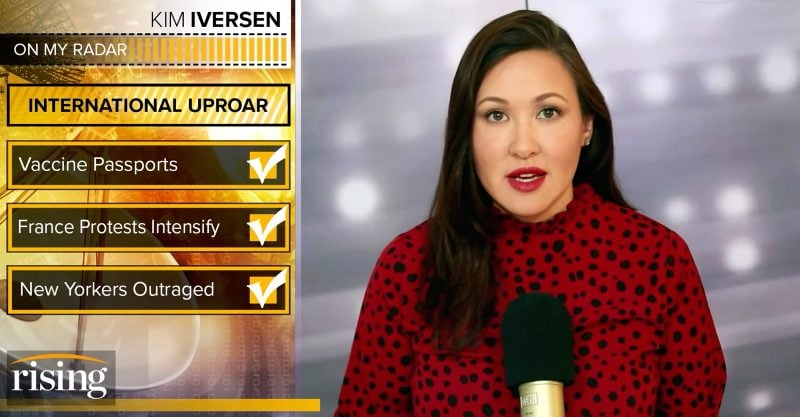 During a recent segment of The Hill’s “Rising,” journalist and political commentator Kim Iversen covered the worldwide protest movement against national vaccine mandates and vaccine passport requirements, a story Iversen argued is getting “almost zero coverage in the American mainstream media.”

Iversen began her tour around the world in Italy, where thousands are protesting the COVID Green Pass.

“The pass is needed for all types of public transportation, including busses and trains,” she said. “It’s required for all workers in the entire country and has recently been mandated for any parent entering their child’s school. Protesters have been met with water cannons and rubber bullets.”

Iversen explained that thousands are on the streets, objecting to the Swiss COVID certificate, “which is required for anyone to enter, or work in, indoor restaurants, bars and theaters.”

Moving on to Amsterdam, Iversen said The Netherlands “has also seen widespread protests with some people carrying signs reading ‘QR is going too far,’” in reference to the digital QR code given to citizens to prove their immunity status.

Iversen also mentioned Israel, where thousands are protesting a mandate which considers an Israeli fully vaccinated only after they’ve had three COVID-19 vaccine doses. “Once six months pass from the second dose, Israelis must get a third [dose] or their green pass expires and becomes inactivated,” she said.

On the topic of France, which has seen some of the largest protests in the world against vaccine passports, Iversen said a COVID pass “is required to enter all indoor venues including cafes, shops, restaurants and bars.”

Local reports say that as many as 415,000 took to the streets against the French COVID pass in August, and to this day large demonstrations are a weekly affair, with police becoming increasingly violent against the protesters.

“Protestors are being targeted by police with water cannons and rubber bullets,” added Iversen.

“I could do an entire segment just on Australia,” she continued. “The opposition to the vaccine passport policy is being beaten by police with batons.”

Iversen asked why we’re seeing massive protests around the world but not in the U.S., other than isolated protests in opposition to New York City’s strict digital COVID vaccine passport.

Iversen replied that the lack of U.S. protests against the new COVID regime makes her wonder “how comfortable we actually are with authoritarianism.”