On the latest episode of The Hill’s “Rising,” journalist and political commentator Kim Iversen said if Dr. Anthony Fauci lied to Congress about the National Institutes of Health funding gain-of-function research, that’s a criminal offense. 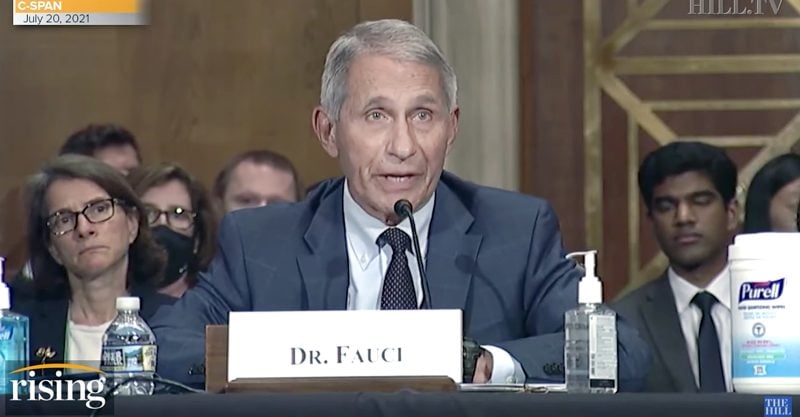 On the latest episode of The Hill’s “Rising,” journalist and political commentator Kim Iversen took a look at Dr. Anthony Fauci’s track record of lying, moving the goalposts and giving the public mixed messages.

“Why hasn’t Fauci been fired yet?” she asked.

Iversen recalled when Fauci sat before Sen. Rand Paul (R-Ky.) and “snarkily resisted” the idea that the National Institutes of Health (NIH) had funded any gain-of-function research in Wuhan, China.

“In fact,” said Iversen, “Fauci insisted the only person lying during the heated exchange was Senator Rand Paul himself.”

“But now it comes out in a letter written by the NIH Principal Deputy Director Lawrence Tabak, D.D.S, Ph.D. that the NIH did in fact fund gain-of-function research through a grant it gave to EcoHealth Alliance.

Iversen reminded the audience that lying to Congress is legally a crime, known as perjury.

“Perjury is a serious criminal offense that can land a person in jail,” Iversen said, “as it did recently for Trump’s attorney Michael Cohen, and it can even lead to the impeachment of a sitting president, as was the case for Bill Clinton.”

“Legally speaking,” Iversen said, these lies are different from Fauci’s previous lies which were told in front of news cameras.

“Originally, Fauci claimed the only people that should wear masks are healthcare workers around known COVID patients, and then, after urging local, state, and federal leaders to adopt all-encompassing public mask mandates, he claimed that he wasn’t walking back his earlier mask statement but that he lied to spare the scarce number of masks for frontline healthcare workers.”

Iversen said Fauci also lied when he claimed the science pointed to needing 60% to 70% population immunity in order to reach herd immunity.

Iversen cited a New York Times article where Fauci admitted when he saw national surveys showing higher public acceptance of vaccines he thought to himself, “I can nudge this [target for herd immunity] up a bit.”

Iversen also accused Fauci of “flip-flopping or moving the goalposts” on almost every topic related to COVID vaccines and vaccination.

“The only thing consistent about Fauci are his dropping approval ratings. His national approval rating currently sits at 41% and my guess is after the latest news about the gain-of-function research and even the puppies, his approval will worsen.”

Iversen said the people who’ve been behind Fauci this entire time should now be calling for his resignation, or calling on President Biden to fire him, for the simple fact that “in order for us to get through this pandemic, we need to have everyone on board with consistent action — and Fauci is clearly not the guy to get that done.”