Rep. Katie Porter and other members of the U.S. House Committee on Oversight and Reform on Thursday grilled top figures at BP America, Chevron, ExxonMobil and Shell Oil, over their “greenwashing and lobbying against climate action." 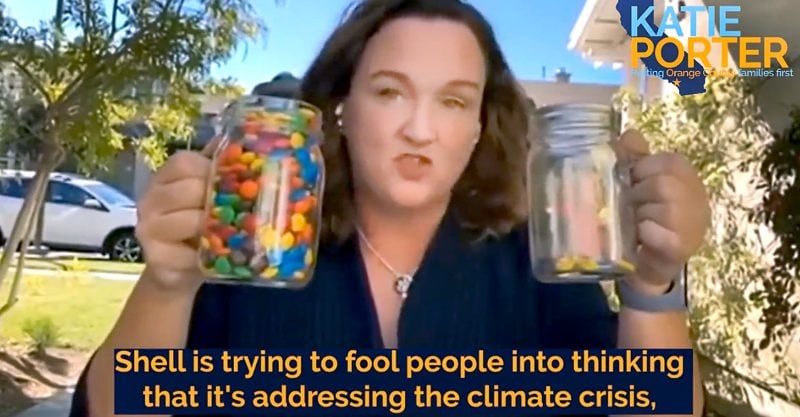 The questioning came during a U.S. House Committee on Oversight and Reform hearing that featured testimony from top figures at the fossil fuel companies BP America, Chevron, ExxonMobil and Shell Oil as well as two trade groups — the American Petroleum Institute and the U.S. Chamber of Commerce — and concluded with a subpoena announcement.

Rep. Ro Khanna (D-Calif.), chair of the panel’s Subcommittee on the Environment, questioned ExxonMobil CEO Darren Woods about the company’s long track record of denying climate science, which has been detailed in a series of investigations the past six years.

ExxonMobil CEO refuses to admit to Congress that it is “false”, “wrong”, “a mistake”, or “regretful” to deny the “linkage between fossil fuels and warming”, as the company’s former CEO Lee Raymond did. #SlipperySix pic.twitter.com/0zw38TuDQ9

The historic hearing was spearheaded by Rep. Carolyn Maloney (D-N.Y.) — the committee’s chair, who announced the subpoena plans at the very end of Thursday’s event — and Khanna.

“We are thankful to see the strong leadership from Chairman Khanna today as he holds the fossil fuel industry accountable — they have skated by as they continue to let the Earth burn,” said Joseph Geevarghese, executive director of the progressive group Our Revolution, in a statement.

“The industry has controlled that narrative for far too long, and today is the first step in exposing the truth to the public,” he added. “The no holds barred, fearless approach from climate champion Rep. Khanna is exactly what is needed at this moment.”

Like Khanna, Rep. Alexandria Ocasio-Cortez (D-N.Y.) took aim at ExxonMobil, referencing an exposé of the oil giant’s lobbying tactics published earlier this year that focused in part on the company’s efforts to influence the Build Back Better budget reconciliation bill, for which President Joe Biden announced a watered-down framework Thursday morning.

Wow. Here’s the CEO of Exxon admitting to @AOC that he’s been on calls with members of Congress about the reconciliation bill. pic.twitter.com/VbW0kHUs0c

Shell’s CEO said that meeting energy demand while addressing climate change is “one of the defining challenges of our time.” But @Shell won’t put its money where its mouth is. I made this hypocrisy plain with a simple visual. pic.twitter.com/QvJHQiVxVm

Fossil Free Media director Jamie Henn said that in her allotted time, the congresswoman “eviscerates the executives … for their greenwashing and lobbying against climate action.”

Porter also addressed leasing public lands to fossil fuel companies — which Biden has so far failed to end, despite his campaign promises.

Fossil Fuel companies are sitting on 13.9 million acres of our federal land they aren’t even using—and they want even more.

If each acre were a grain of rice, that would be 479 pounds. I demonstrated at a hearing with Big Oil ⬇️ pic.twitter.com/fFr53vIglr

“When are you going to cut the check?” Rep. Rashida Tlaib (D-Mich.) asked Chevron CEO Michael Wirth, accusing the company of owing over $50 billion in judgment and settlement debts to communities in 31 countries for “poisoning the planet.”

Tlaib also called out Chevron for trying to intimidate Steven Donziger, an American human rights attorney now serving a six-month prison sentence that stems from the oil major targeting him because he sought justice for Indigenous people enduring industry pollution in Ecuador.

Rashida Tlaib accuses Chevron CEO of making $29 million for “poisoning the planet” and says that Chevron owes $50 billion to “communities in 31 countries.”

Confused CEO says he has no idea what she’s talking about pic.twitter.com/VgoHNbyLTl

Rep. Ayanna Pressley (D-Mass.) blasted Big Oil for pouring money into not only political lobbying but also shadow groups “to fight against our climate justice efforts” while Rep. Cori Bush (D-Mo.) shamed the executives for pushing fossil fuels “despite knowing that promoting them means promoting environmental racism and violence in Black and Brown communities.”

Hypocrisy from Big Oil on clean jobs, targeted by @RepPressley. #SlipperySix
We recently asked climate youth activists for their thoughts on working for Chevron: https://t.co/lvXCuSFnFk

“Fossil fuel companies have polluted our air, land and water for profit despite knowing the devastating impact it has on our [communities],” Rep. Ilhan Omar (D-Minn.) similarly highlighted.

“As one of my colleagues said earlier, I hope that you are ashamed of the future that you contributed for your children and for ours,” she told the executives, “and I ask all of you to resign.”

Fossil fuel companies have polluted our air, land, and water for profit – despite knowing the devastating impact it has on our communities.

Temporary profits cannot continue to be prioritized over the future of our planet.

It’s past time to hold these companies accountable. pic.twitter.com/F8bsVeM2M5

Reflecting on the hearing Thursday, Henn wrote that “it was inspiring to see so many Democrats standing up to Big Oil.”

“From Rep. Porter using M&Ms to show the industry’s paltry investments in renewables to Rep. Bush calling out the industry for its environmental racism and white supremacy, this is the type of leadership that climate activists have been hungry for,” Henn continued.

“Let’s hope that this sort of bravery is contagious and spreads all the way to the Oval Office,” he added, “where President Biden has yet to use the executive authorities at his disposal to truly take on Big Oil and stop the federal approval for dangerous fossil fuel products.”