Mexico Minister of Health ‘Wouldn’t Vaccinate His Own Grandchildren’

On the latest episode of “The Jimmy Dore Show,” comedian and political commentator Jimmy Dore covered recent comments by Mexico’s health minister who said he opposes COVID vaccines for children. 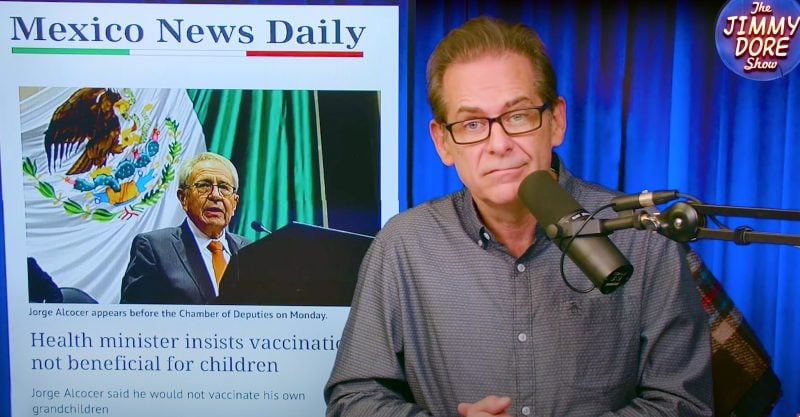 On the latest episode of “The Jimmy Dore Show,” comedian and political commentator Jimmy Dore discussed a recent article in Mexico News Daily quoting the country’s health minister who said he opposes COVID vaccines for children.

“The risk to a child from COVID is less than the risk from flu … that’s a fact,” said Dore. “So no matter what you hear from NBC News, or CNBC, or MSNBC, or CNN or Fox News or ABC News or The New York Times or the Washington Post, your child is not at risk from COVID, don’t let them scare you.”

Dore said  the inhibition of the immune system “sounds like more than a passing side effect.”

Alcocer told Mexico’s House of Congress, “Children have wonderful immune systems compared to the later phases of their life” and that “hindering” the “learning” of a child’s immune system, or the “cells that defend us our whole lives” — with a “completely inorganic structure” such as a vaccine — is not the right thing to do.

Alcocer has stated publicly he wouldn’t vaccinate his own grandchildren.