New reporting by the Bureau of Investigative Journalism shows HSBC wrote to the Net-Zero Banking Alliance on behalf of 12 large banks, calling on the alliance to loosen restrictions and delay deadlines in order to keep the banks from having to commit to far-reaching climate action. 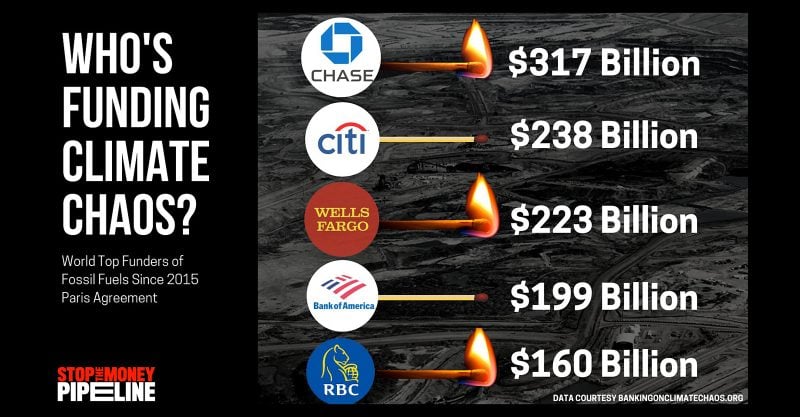 An effort by global financial giant HSBC to water down an industry climate pledge exemplifies the fact that banks and other profit-driven companies “cannot be trusted” to end their complicity in the human-caused climate emergency, critics charged on Tuesday.

According to new reporting by the Bureau of Investigative Journalism (BIJ), HSBC wrote to the Net-Zero Banking Alliance (NZBA) — the initiative started by Mark Carney, former head of the Bank of England — on behalf of 12 large banks, calling on the alliance to loosen restrictions and delay deadlines in order to keep the banks from having to commit to far-reaching climate action.

The alliance requires banks to set targets to reach net-zero carbon emissions in their lending and investment portfolios by 2050, with an interim target set for 2030.

Writing on behalf of banks including JPMorgan Chase, Citi and Bank of America, HSBC asked that the alliance remove from its pledge the list of high-emissions sectors for which banks are required to set net-zero targets for within 18 months of joining the NZBA.

The BIJ’s Josephine Moulds reports that HSBC wanted to make the climate commitments from key sectors — including fossil fuels, agriculture, real estate and steel — “less rigorous” by delaying new emissions reduction targets until 2025 or even 2030.

Under the NZBA, after setting targets for carbon-intensive sectors within 18 months, banks are required to set targets for the remaining sectors in which they invest within three years, but HSBC also asked that members be required to set net-zero targets only for industries with so-called “credible transition pathways,” which “could be highly subjective,” wrote Moulds.

HSBC has publicly committed to reaching net-zero carbon emissions, but organizations within the grassroots Stop the Money Pipeline coalition — which aims to hold “the financial backers of climate chaos accountable” — said the bank’s private actions demonstrate its true position on the climate emergency.

🚩🚩🚩New investigation reveals @HSBC secretly working against @MarkJCarney‘s net zero club
🗣️@AdamMcGibbon, @MarketForces:
“It’s staggering that a bank signed up to that target is doing everything it can to make sure that target can’t be met.” https://t.co/FOdINNAiEh #COP26

“HSBC’s public rhetoric on climate change can’t be trusted,” said Adam McGibbon, UK campaign lead at Market Forces. “Banks like HSBC know what the International Energy Agency has said — ‘net zero by 2050’ means no new fossil fuel expansion, from this year. So it’s staggering that a bank signed up to that target is doing everything it can to make sure that target can’t be met.”

According to the Bureau of Investigative Journalism, despite its public commitments and statements, HSBC “has resisted regulation of its activities to achieve that target” and in 2020 poured more than $23 billion into the fossil fuel industry.

Since committing to net-zero financed emissions by 2050 one year ago, reported the Bureau, HSBC has “helped Saudi Aramco, the world’s most polluting company, raise [$13.9 billion] and Qatar Petroleum raise [$12.4 billion] to fund the expansion of the world’s largest gas field.”

The Stop the Money Pipeline pointed to a new analysis by researchers at the University of Exeter in the UK, showing that continuing to invest in fossil fuels will result in financial losses for governments and corporations, with early investors in renewable energy expected to profit in the coming decades.

“Time and time again we see banks launch voluntary climate initiatives which seem to be aimed purely at reaping PR benefits now, while postponing all concrete action as far into the future as possible,” said Maaike Beenes, climate coordinator at BankTrack.

“Eighteen months is already a lavish amount of time to set 2030 targets … And with half the world’s fossil fuel assets expected to become worthless as soon as 2036, all this effort to delay action is not even in banks’ own best interests.”