Lawsuits Against Plastics Industry Could Exceed $20 Billion by 2030

Thanks to new legal pathways, people around the world could sue plastics manufacturers for health and environmental damages totaling more than $20 billion by 2030, according to a new study by the Australian Minderoo Foundation. 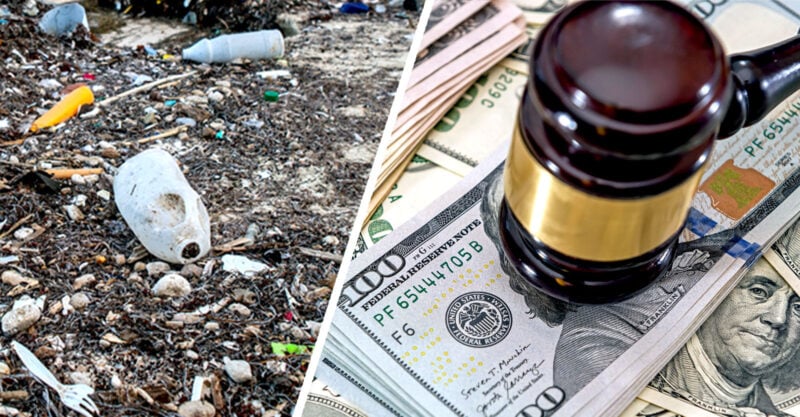 Thanks to new legal pathways, people around the world could sue plastics manufacturers for damages totaling more than $20 billion by 2030, with most lawsuits originating in the U.S., according to a new study.

The report, published by the Australian Minderoo Foundation, estimates that the plastics industry is costing society around $100 billion annually in environmental clean-ups, ecosystem degradation, shorter life expectancy and medical treatments.

Minderoo is a philanthropic organization focused on the environment and climate, among other causes.

“We found that the negative impacts of plastic on human health are at least as consequential as the environmental risks about plastics that tend to dominate the story,” Dominic Charles, director of finance and transparency at the Minderoo Foundation and one of the study’s coauthors, told Environmental Health News (EHN). “Working to actually put a number on these social costs was a real eye opener.”

To estimate these costs the researchers reviewed more than 5,000 academic papers to determine where there was scientific consensus on health harms associated with plastic ingredients.

Then they estimated the global rates of disease and mortality associated with exposures to those ingredients to put a dollar amount on the public health costs.

Finally, they worked with a group of attorneys who specialize in modeling risk for investors and insurers to estimate the legal liability plastics manufacturers are likely to face.

“The challenge is that plastics are completely ubiquitous, so it’s very hard to pinpoint the source of a harmful exposure,” Charles explained.

“Eventually that leads you to the somewhat absurd conclusion that it doesn’t matter how toxic your product is — as long as lots of companies are producing as much of it as possible, in as many different ways as possible, nobody has any liability. But that’s something we’re seeing change. There’s an evolution being made in the legal doctrine to deal with that.”

Lawsuits unfolding related to other ubiquitous chemicals like PFAS (per- and polyfluoroalkyl substances), glyphosate and even opioids are forging new legal pathways, the report points out.

In the case of PFAS, the chemicals are pervasive, with many companies selling products that contain them, but only a handful of companies manufacture them — and those are the companies being sued.

The story is similar, Charles said, when it comes to the most harmful additives in plastic products.

“The plaintiffs in these cases are using innovative legal arguments, particularly related to public nuisance theories of harm, to successfully bring these cases forward,” Charles said. “We think these kinds of new legal strategies will also open the door to plastic litigation.”

How is plastic harming us?

While the research is still unfolding, the report concluded that there’s “robust scientific consensus on human health harms resulting from some of the performance-enhancing chemical additives used in plastics.”

These include certain phthalates, bisphenols (like BPA and its replacements) and flame retardants.

All three classes of chemicals contain endocrine-disrupting compounds, which cause problems in the body’s hormonal systems and are linked to significant health issues including infertility, early puberty, developmental issues like ADHD and autism and metabolic disorders like type II diabetes and obesity. There’s also evidence that they increase cancer risk.

The study estimates that manufacturers of these chemical additives are most likely to be exposed to litigation stemming from these health harms.

Exposure has been linked to respiratory, immune, reproductive and digestive system problems and increased cancer risk.

“Micro or nano plastics have the same kind of persistence in the environment as PFAS chemicals,” Charles said. “Those legal proceedings are going to be highly relevant to the future of plastics litigation.”

Charles added that although these lawsuits could total billions of dollars, they won’t keep pace with the social costs, especially in the near term.

These hazards enter the stream of commerce and it’s many years later that scientists start piecing together how harmful they are, he said. Then, it takes years to reach a scientific consensus, and it still takes years before lawyers take action after that.

“That’s why the threat of liability isn’t working as a sufficiently preventative measure right now,” he said. “We also need to change the way we’re regulating these chemicals.”

The American Chemistry Council, a trade and lobbying group for chemical manufacturers, issued a statement saying the report is “detached from reality” and emphasizing that plastics are important to modern medicine and innovation.

A spokesperson for the group declined to answer questions about what specific aspects of the report the Council disagrees with, and whether the group has ever conducted its own risk assessments or addressed potential litigation related to health and environmental damages from plastics.

What does this mean for petrochemical development?

In the first 13 years of the 21st century, plastics manufacturing surpassed total production in the last century, and production is expected to double again in 20 years and almost quadruple triple by 2050. Lawsuits have the potential to slow that growth.

“This report is basically communicating that if you invest in plastics, you’re taking a calculated risk and there are threats looming,” Sean O’Leary, a senior researcher focused on energy and petrochemicals at the Ohio River Valley Institute, a progressive think tank, told EHN.

O’Leary, who was not involved in the Minderoo study, said petrochemical development in Appalachia’s Ohio River Valley, which spans parts of western Pennsylvania, Ohio, West Virginia, Virginia, Kentucky, Indiana, Illinois and Tennessee, has already been hampered by unfavorable market conditions for plastics.

Shell is about to open a massive new plastics plant in the Ohio River Valley, about 35 miles northwest of Pittsburgh, which will turn fracked ethane gas into up to 1.6 million metric tons of plastic pellets annually, most of which are expected to produce single-use packaging and plastic bags.

It’s one of five such facilities that have been proposed in the Ohio River Valley, but the only one that’s gotten off the ground. None of the other projects are expected to move forward.

Other plans “died not because we convinced a lot of investors to become more climate conscious or environmentally caring,” O’Leary said, “but because we demonstrated that these investments were not wise ones.”

“Shell still has additional investment decisions to make concerning their plant,” he added, “and now they’ll have to take into account at least the possibility of legal action and the risk posed by that.”

Residents near Shell’s plant have expressed concern about how the millions of tons of air pollution the plant will generate annually will impact their health.

The Minderoo report only briefly acknowledges liability related to pollution from plastics manufacturing plants, but Charles said these communities are particularly at risk from the effects of the industry.

“Exposures around production facilities are relatively small compared to the ubiquitous exposures and potential liabilities arising from plastics as a whole,” he said. “That said, they are probably easier to build a case on, and those cases may well be some of the first to be brought in terms of plastic litigation.”