GMO Purple Tomatoes Just Moved One Step Closer to Grocery Shelves — Should You Buy Them?

The U.S. Department of Agriculture favorably reviewed genetically engineered purple tomatoes, engineered by Norfolk Plant Sciences to be rich in anthocyanins, the pigments that give blueberries, blackberries and certain other deeply-hued produce their color. 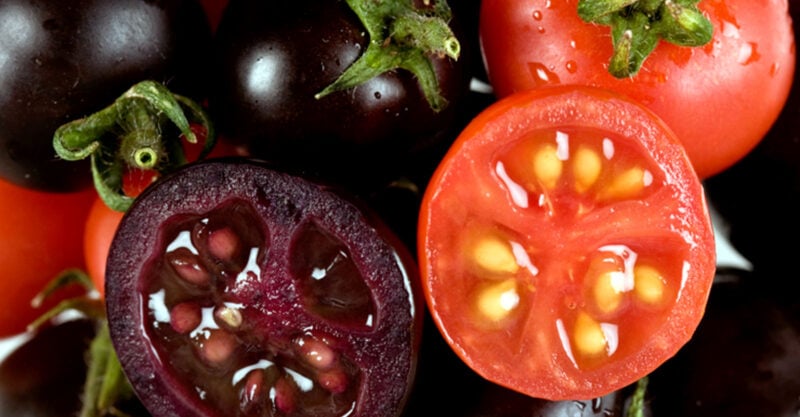 Nothing signals summer like a red, ripe juicy tomato, but soon this mainstay of backyard gardens and farmers’ markets may be met with a new kid on the block — a genetically engineered purple tomato.

The U.S. Department of Agriculture’s Animal and Plant Health Inspection Service announced in September that it had favorably reviewed the genetically modified organism developed by Norfolk Plant Sciences.

“The tomato was modified to alter its color and enhance its nutritional quality,” the USDA noted, finding that the GE plant is “unlikely to pose an increased plant pest risk compared to other cultivated tomatoes and is not subject to regulation …”

While this says nothing of GE purple tomatoes’ potential to wreak havoc on human health, it moves the plants one step closer to reaching your grocery store.

In addition to being altered for taste and nutritional purposes, the GE tomato has a longer shelf life than red tomatoes.

How did the purple tomatoes come to be?

They were developed by biochemist Cathie Martin, a professor at the U.K.’s University of East Anglia, along with project leader John Innes Centre.

Martin, who has studied flower pigments for decades, engineered tomatoes that were rich in anthocyanins, the pigments that give blueberries, blackberries and certain other deeply hued produce their color.

In 2008, Martin and colleagues used two transcription factors from snapdragon plants to increase anthocyanins in tomatoes.

“Expression of the two transgenes enhanced the hydrophilic antioxidant capacity of tomato fruit threefold and resulted in fruit with intense purple coloration in both peel and flesh,” they wrote in Nature Biotechnology that year.

Further, when they fed the purple tomatoes to cancer-susceptible mice, it led to a “significant extension of life span.”

Speaking with CNN, Martin suggested that the GMO tomatoes may alter human health via multiple mechanisms, stating, “It’s not like a drug, where there’s a single target. It’s about them having antioxidant capacity. It also may influence the composition of the microbiome, so it’s better able to deal with digestion of other nutrients.”

In 2013, Martin again published research related to the GMO tomatoes, this time showing that the higher anthocyanin content doubled their shelf life compared to regular tomatoes.

“The increased antioxidant capacity of purple fruit likely slows the processes of overripening,” according to the study, which also found that the purple tomatoes had reduced susceptibility to gray mold.

Martin established Norfolk Plant Sciences to market the GMO creation. The company plans to go after approval from the U.S. Food and Drug Administration (FDA) next, then work toward commercialization. Testing to find the best consumer markets for the GE purple tomatoes is slated for 2023.

Health benefits of anthocyanin well known — GMOs, not so much

Flavonoids are a group of polyphenols and phytonutrients found in most fruits and vegetables.

There are more than 6,000 unique flavonoids, but as a group, they’re most well-known for their antioxidant and anti-inflammatory effects and have been found to lower the risk of many chronic inflammatory conditions.

Anthocyanins, specifically — found in red-blue plant pigments that give berries, pomegranates and other foods their red, blue and purple color — have been shown to:

So, there are many reasons you may want to include more anthocyanin-rich foods in your diet — and doing so is easy.

Just eat more berries, one of the healthiest natural foods on the planet.

Considering there are already anthocyanin-rich foods found in nature, it’s unnecessary to genetically engineer one using a tomato infused with snapdragon genes.

Further, if the history of health risks tied to GE foods is any indication, any benefit from increasing your antioxidant intake via GMO purple tomatoes is likely to be offset by the adverse effects possible from consuming GMOs.

As noted by The Institute for Responsible Technology:

“The process of genetic engineering creates mutations and deletions that can happen all throughout the DNA. As a result, allergens can increase if it’s already existing in the food or through the introduction of a new allergen. Same thing with toxins; same thing with carcinogens; same thing with nutrition issues.

“And all of that has been found in GMOs, both at the experimental level and also even at the commercial level. GMO corn, for example, has higher levels of existing toxins and a whole new allergen … So the process of genetic engineering is like throwing a dart at our DNA and saying ‘we’ll just turn this one off or turn this one on or make this one higher,’ disregarding the collateral damage.”

One notable difference the GE purple tomatoes have from many commercialized GE foods is that they’ll be easy to spot in the supermarket. Natural purple tomato varieties do exist, but it’s only their skin that’s purple.

The GMO variety has purple skin and purple flesh, making it easy to avoid for those wishing to opt out of the GMO experiment.

Nathan Pumplin, Norfolk’s CEO of U.S. commercial business, told CNN he believes this will be a selling point, striking a “cord with people in this very basic way … it takes no imagination to see that it’s different,” he said. “It really allows people to make a choice … a purple tomato — you either choose or choose not to consume.”

Often, this isn’t the case, as producers may try to sneak GMOs onto the market with no labeling, making it impossible for consumers to know what they’re eating. This occurred in 2019 with a gene-edited soybean oil created by biotech company Calyxt.

Along with refusing to identify the first buyer of its gene-edited high-oleic soybean oil in 2019, Calyxt marketed its product as “non-GMO,” although it’s clearly genetically engineered.

By 2021, however, Calyno was described as a “flop,” as farmers became reluctant to purchase the GE soybean seeds due to lower crop yields. “The Calyxt business model of selling seeds to farmers and then processing the high oleic oil to sell to food service companies and crushing plants hasn’t been profitable,”

“Calyxt’s gene-edited soybean is a good example of a genetically engineered crop failing to live up to the hype surrounding it.

“For the past 25 years, proponents of GMO crops have claimed that they would help to “feed the world,” produce more nutritious foods, increase food security, and other claims.

“But they have failed to deliver on the promises, and there remain two predominant GMO traits, herbicide tolerance and insect resistance.”

There are quite a few GE fruits and vegetables in development; purple tomatoes are just one example. Apples genetically engineered to resist browning when sliced or bruised appeared in select grocery stores in the U.S. Midwest in 2017.

Developed by Okanagan Specialty Fruits, the apples are engineered to suppress the production of the enzyme — polyphenol oxidase — that causes browning.

The first two varieties of the GE Arctic Apple — Arctic Golden and Arctic Granny — were deregulated by the U.S. Department of Agriculture in 2015.

A third variety, Arctic Fuji, was created in 2016, while in 2019 the company announced Arctic Golden and Arctic Granny fresh slices, which they suggested was the perfect option to get kids to eat more apples.

It’s expected that Arctic Fuji apples will finally come to the market in the fall of 2022, while the company has also released Arctic ApBitz, dried apple snacks created to “use all of the Arctic apples regardless of size or shape.”

Meanwhile, a group of U.S. and Mexican scientists sequenced the genomes of Mexican and well-known Hass avocados in 2019.

Their study, published in PNAS, reveals “ancient evolutionary relationships” that give clues to the fruit’s origins but also opens the floodgates to future genetic modification of this already perfect food.

Genetic engineering has also been touted as the only way to save the banana — the most popular variety of which (Cavendish) is incredibly prone to diseases and has even been said to be at risk of extinction.

Other fresh fruits and vegetables that are currently available in GMO varieties include potatoes, summer squash, papayas and pink pineapples. “Pinkglow” or “rosé” pineapples, which are only available in the U.S. and Canada, were approved by the FDA in 2016 but only recently have reached stores.

Genetically engineered by Del Monte Fresh Produce, the pink fruits “produce lower levels of the enzymes already in conventional pineapple that convert the pink pigment lycopene to the yellow pigment beta carotene,” according to the FDA.

The GE pineapple isn’t marketed as GMO. Instead, its only label is “extra sweet pink flesh pineapple” on tags attached to the fruit’s crown.

Of note, while the pineapples are only sold in the U.S. and Canada, they’re grown in Costa Rica and, according to Del Monte, not available in Hawaii — “Hawaii prohibits the shipment of any pineapple into their state.”

As far as the GMO crops that are most widely available, corn ranks near the top, as more than 90% of corn grown in North America is genetically engineered.

Other high-risk crops, meaning a GMO version is widely available, include:

GMOs aren’t about feeding the world

Does the world need an extra sweet pink pineapple or a purple tomato with the same antioxidants already found in naturally purple berries?

It’s not about feeding the world, as the biotech industry often parrots, it’s about patenting it.

“Nearly all GMOs are used to make animal feed or automobile fuel — not food for humans. When GMOs are in human food, they tend to show up as non-nutritious processed ingredients such as oils and sugars or preservatives and emulsifiers.

“GMO crops are not about feeding the world but about patented ownership of the food supply. After the Dow-Dupont and Bayer-Monsanto mergers, just three chemical companies now control about 60 percent of the world’s seed supply.”

The health risks of consuming GMOs are unknown. It’s an ongoing experiment, one that also has repercussions for the environment.

“GMOs are a direct extension of chemical agriculture and are developed and sold by the world’s biggest chemical companies,” the Non-GMO Project continued.

“The long-term impacts of GMOs are unknown, and once released into the environment these novel organisms cannot be recalled.”

Because avoiding GMOs isn’t always as easy as avoiding purple-fleshed tomatoes, choose organic or biodynamically grown food as much as possible.

For now, in the U.S. all foods labeled organic are also non-GMO.

According to the USDA:

“The use of genetic engineering, or genetically modified organisms, is prohibited in organic products. This means an organic farmer can’t plant GMO seeds, an organic cow can’t eat GMO alfalfa or corn, and an organic soup producer can’t use any GMO ingredients.”