Proposed legislation calls for a federal database for dietary supplements, which requires supplement makers to submit information to the U.S. Food and Drug Administration — a move opponents say could give the agency more power to ban supplements from the market. 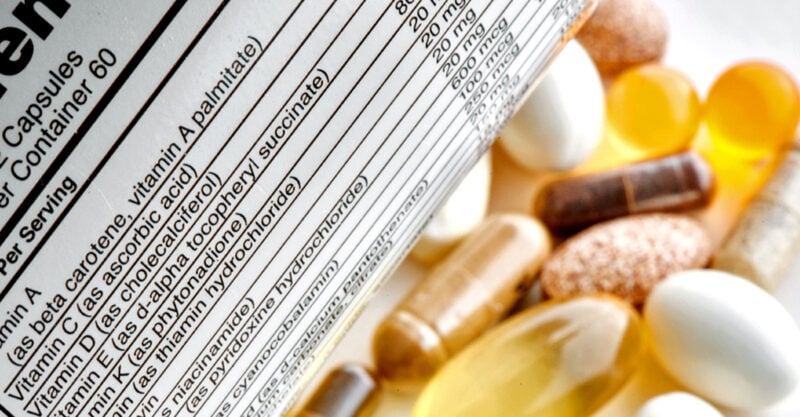 The U.S. supplement market was valued at $48.4 billion in 2021, with an expected compounded annual growth rate of 8.9%. In the U.S., where 80% of Americans use dietary supplements, the industry is viewed as trustworthy by the majority of adults (79%).

However, access to high-quality supplements is continually being threatened by legislation, along with corporate mergers and acquisitions.

Proposed legislation is calling for a federal database for dietary supplements, which could pave the way for the FDA to gain premarket approval power — changing access to supplements as we know them.

Mandatory product listing for supplements may be coming

In April, Sens. Dick Durbin, D-Ill., and Mike Braun, R-Ind., introduced the Dietary Supplement Listing Act of 2022. The Act would require supplement makers to provide information about their products to the FDA, including (but not limited to):

Known as MPL for dietary supplements, supporters claim it’s a way for the FDA to know what products are on the market and what ingredients they include. But opponents suggest the move, which is burdensome for small supplement companies, could ultimately give the FDA more power to ban supplements from the market.

According to Natural Products Insider:

“Pete Evich, vice president of the lobbying firm Van Scoyoc Associates in the nation’s capital, cited ‘immense pressure’ from MPL proponents to get the proposal into an omnibus bill. … Durbin is expected to lobby aggressively for MPL during the lame-duck session.”

Why the push for mandatory product listing?

The information that MPL would require is already available via existing sources, including facility registrations and product labels, which include ingredients and dosing information readily available for the public to see. The National Institutes of Health Dietary Supplement Label Database also contains some supplement label information.

“We keep … wonder[ing] why the reporting requirement is so redundant. It requires submission of not just the label but also a whole bunch of information that’s already on the label. … You gotta ask this question: Should American taxpayers pay for two databases?”

Meanwhile, a prominent concern is that along with being unnecessary and burdensome, MPL could turn into a tool for premarket approval, which the FDA could use to keep dietary supplements off the market. Daniel Fabricant, president and CEO of the Natural Products Association, explained to Nutritional Outlook:

“‘The thing is, if the safeguards were there’ — meaning language built into the bill to clearly state that the law doesn’t let FDA reject any database submissions — ‘they would be specifically spelled out. They would say, Hey, nothing in this act would allow the Secretary to remove an ingredient that isn’t the subject of final agency action.’ …

“‘That would give you a safe harbor, but we haven’t seen any language here that would present that [in the current bills]. And, again, if the goal is … to get FDA labels? OK, those would meet that goal.’

“‘Now, if the goal is something else, well then people need to be honest about what that goal is. If that goal is to get FDA an administrative tool that’s in effect premarket approval? Yeah, that’s not going to work at all. Everyone is opposed to that.’”

There’s also the possibility that MPL would bring the U.S. closer to adopting universal limits on supplement dosages and formulas — a move that would also restrict consumers’ access to therapeutic levels of such products. According to Alliance for Natural Health USA:

“As we’ve seen in issues like GMO-labeling, where some states required labeling of GMO foods and others didn’t until federal law pre-empted state labeling laws, big companies don’t like dealing with a patchwork of regulations.

“Mega-corporations doing business across the world would likely welcome harmonized levels of supplements so they can sell their products on the world market without having to change formulations or labels.

“Higher-end products would be eliminated because they wouldn’t meet the ‘harmonized’ nutrient levels, and all that would be left are the most basic, cookie-cutter products that don’t support patient needs but make the most money — think of the supplements you see at CVS, or Walgreen’s, etc.”

‘We need to be aware of FDA’s history’

Given the FDA’s history of attacking dietary supplements, MPL needs to be viewed with extreme caution, particularly with regard to what it could morph into in the years to come via “regulatory drift.”

Supporters have claimed an MPL database would help protect consumers by keeping fraudulent or adulterated products off the market, but even this is misleading since criminals could easily submit fraudulent labels. McGuffin explained:

“And that’s why we’ve continued to push back on that detail.

“If the language is cleaned up, then we’d be back to, ‘Could somebody please clarify with a great deal of certainty why this is needed, because we’re still at that point of we don’t really see the need. We think it’s redundant to FDA’s existing authority to get as many labels as it wants.’

“We think it’s unlikely to work because … the companies that we really want pushed out of the market are those creepy-creeps that sell products that say ‘dietary supplements’ and contain undeclared drugs. But we don’t think that this will fix that, because they’ll just register. And then, apparently, they’re compliant.

“And then we’re also concerned about potential regulatory drift. Where does FDA go with this over the next 10 or 15 years? It’s not crazy to think, or I would be naïve to think, that based on decades and decades of history, we should assume that FDA will treat this exactly as we think it should be treated.

“I think anybody with experience in the trade would have to agree that we need to be aware of FDA’s history, which is to seek narrowing of availability of natural products and dietary supplements.”

Another threat to dietary supplements that could also turn into a preapproval system is the FDA’s New Dietary Ingredients (NDI) guidance.

While large corporations will have no problem complying with FDA’s burdensome NDI requirements, many small supplement makers may be pushed out of the market as a result. Alliance for Natural Health USA noted:

“Simply put, the FDA is trying to install a quasi pre-approval system for ‘new’ supplements — those introduced to the market after 1994.

“In its revised guidance document explaining how they intend to implement this provision of the law, the FDA has signaled its intention to treat many, many common supplements as ‘new’ and thus subject to the onerous NDI requirements before they can come to market.

“Note that the law passed by Congress only calls for a premarket notification system for ‘new’ supplements, but the FDA has tried to usurp power to turn this into a premarket approval system like the one they have for drugs.

“An economic analysis estimated that, if implemented as is, the NDI guidance could lead to the elimination of over 41,000 products from store shelves.”

Is the FDA intent on turning supplements into ‘drugs’?

The FDA recently concluded that beta-nicotinamide mononucleotide (NMN), an antiaging ingredient, cannot be marketed or sold in dietary supplements, because it was investigated as a pharmaceutical drug.

The conclusion came in response to an NDI notification submitted for NMN. The takedown of NMN is a harbinger of things to come, according to Chris Masterjohn, who has a Ph.D. in nutritional sciences.

He tweeted that the FDA’s ruling that NMN is “an article authorized for investigation as a new drug,” is a “backdoor into essentially banning all supplements that do anything useful.”

The key narrative continues to be the FDA honing in on the most successful supplements and essentially turning them into pharmaceutical products. Masterjohn continued:

“I am not a lawyer and I am not an expert on FDA regulations, but I believe the FDA’s interpretation … means that the following will happen: a) company A wants to make a health claim for a supplement. They have to fill out an IND [investigational new drug]. b) company B does not want to do that.

“They want to sell their supplement and make no claims. However, company A filled out an IND. Now, FDA concludes company B’s supplement is a drug.

“With this interpretation, what will happen is slowly but surely everything on the market will be chipped off from ‘dietary supplements’ and stacked onto ‘drugs’ because companies that want to do research studies to show health effects will have to fill out INDs.

“Once they fill out an IND, according to FDA’s current interpretation, that thing has become a drug, can no longer be a supplement, and is no longer a nutrient or food. In short, the FDA is completely unhinged.”

Meanwhile, multinational companies like Bayer, Nestle, Unilever, Proctor & Gamble and Clorox have been buying up supplement companies at a frenzied pace. In 2018, there were 83 such transactions. This rose to 137 in 2021. For instance, Nestle Health Science, a division of Nestle, now owns:

“What will happen to them now that they are owned by mega-corporations that have not historically had core natural health principles as the foundation of their businesses?

“We’ve spoken to several of the largest and highest quality brands that have not been purchased; they have confirmed that larger companies have made several unsuccessful attempts to purchase them.”

Why are there continued attempts to make supplements drugs and for mega-corporations to acquire their makers? “Where there’s money to be made, big players will want to cash in,” Alliance for Natural Health explained.

The end result for consumers could be disastrous, however, including restricted access to supplements and inferior products on the market:

“Overall, this level of consolidation isn’t good for competition, because just a small number of companies can make decisions that affect our supplement access, and many of them do not share the values of small, independent companies who go into business to fill a need in the natural health sector.

“Issues over quality of supplements and access to higher dosages become the decision of a smaller and smaller contingent of companies — this is not good from a health freedom standpoint.”