You can’t see, hear or smell electromagnetic fields and most people don’t feel them — but they’re associated with systemic inflammation and mitochondrial dysfunction thought to be a root cause for many of today's chronic diseases. 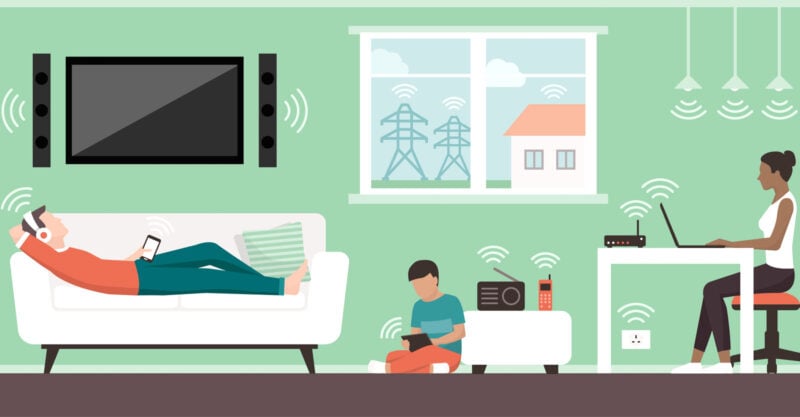 Over the past decade, I’ve written many articles discussing the evidence of biological harm from nonionizing EMF radiation.

While the wireless industry is built on the premise that the only type of radiation capable of causing harm is ionizing — X-rays being one example — researchers have for a long time warned that even nonionizing and non-heating radiation can jeopardize your health. This includes not only human health but also that of plants and animals.

Over time, I became so convinced of the deleterious effects of EMF, I took three years to write “EMF*D,” in which I review the now overwhelming evidence showing EMFs are a hidden health hazard that simply cannot be ignored any longer, especially seeing how the rollout of 5G will exponentially increase exposures.

Over the years, I’ve interviewed several experts who have shared their in-depth knowledge about the poorly understood mechanisms behind EMF harm.

Martin Pall, Ph.D., Professor Emeritus of biochemistry and basic medical sciences at Washington State University, has published research showing that the primary danger of EMFs — and what drives the processes of chronic disease — is the mitochondrial damage triggered by peroxynitrites, one of the most damaging types of reactive nitrogen species.

Low-frequency microwave radiation activates the voltage-gated calcium channels (VGCCs) in the outer membrane of your cells, causing them to open, thus allowing an abnormal influx of calcium ions. This activates nitric oxide, which is a precursor for peroxynitrite.

These potent reactive nitrogen species are associated with an increased level of systemic inflammation and mitochondrial dysfunction and are thought to be a root cause for many of today’s chronic diseases.

For an in-depth understanding of peroxynitrites and the harm they inflict, see “Nitric Oxide and Peroxynitrite in Health and Disease” by Dr. Pal Pacher, Joseph Beckman and Dr. Lucas Liaudet. It’s one of the best reviews I’ve ever read and is free to download.

One of the most significant downsides of peroxynitrite is that it damages DNA.

While your body has the capacity to repair that damage through a family of enzymes collectively known as poly ADP ribose polymerases (PARP), PARP require NAD+ for fuel, and when they run out of NAD+ they stop repairing your DNA, which can lead to premature cell death.

Dr. Sam Milham, a physician and epidemiologist, wrote the book, “Dirty Electricity: Electrification and the Diseases of Civilization.” In his interview, he explains the biological mechanisms of high-frequency electric transients (electromagnetic interference patterns), and details some of the lesser-known household sources of this “dirty electricity.”

Magda Havas, Ph.D., associate professor at Trent University in Canada, has written research including the effects dirty electricity can have on children’s behavior, and helpful remediation techniques.

EMF pollution is likely taking a hidden toll on your health

The problem with EMF radiation is that you cannot see it, hear it or smell it, and most do not feel it. Still, researchers assure us that biological effects are taking place whether you’re able to sense it or not. For most, it’s simply a matter of time and overall exposure load.

Here, it’s important to realize that we’re not just talking about radiation from your cellphone. The electromagnetic frequencies emitted from your Wi-Fi router, computer, home appliances, all manner of wireless “smart” technology and even the wiring inside your walls are all capable of inflicting serious biological harm to your body and mind.

And with 5G, it’s bound to get far worse.

Electromagnetic hypersensitivity syndrome is on the rise

For some, the effects of EMFs are unmistakable and undeniable, and the number of people reporting pathological hypersensitivity to EMFs is rising. In 2008, an Austrian study noted that the actual prevalence of electromagnetic hypersensitivity syndrome in Austria had risen by 1.5% since 1994, from 2% to 3.5%.

The RT documentary “Wi-Fi Refugees,” featured in “Documentary Explore Electromagnetic Hypersensitivity Syndrome,” investigates the struggles reported by these “canaries in the coal mine.”

While symptoms may vary from one individual to another, commonly reported symptoms of electromagnetic hypersensitivity syndrome include:

Other reported symptoms include:

One 2015 study pointed out that electromagnetic hypersensitivity is becoming an increasing challenge to the medical profession, which has yet to fully understand its implications, let alone its remedies.

Still, the complaints of modern-day hypersensitivities match those reported in the 1970s and ’80s by those working with radio and radar equipment and cathode ray tube monitors, which tells us that this is not a brand-new phenomenon.

According to the authors:

“In population-based surveys, the prevalence of EHS has ranged from 1.5% in Sweden to 13.3% in Taiwan. Provocation studies on EMF have yielded different results, ranging from where people with EHS cannot discriminate between an active RF signal and placebo, to objectively observed changes following exposure in reactions of the pupil, changes in heart rhythm, damage to erythrocytes, and disturbed glucose metabolism in the brain.”

As early as 2005, the World Health Organization warned that people have “for some time” reported health problems attributed to EMF exposure and that some are “so severely affected that they cease work and change their entire lifestyle.”

The possibility of large portions of the population being unable to work or live as free individuals due to incessant, elevated exposure to EMF is a very real threat to society as we know it.

The reality is that there are very few EMF-free zones left on the planet, and such zones will further shrink with the global implementation of 5G.

I believe EMF exposure is one of the greatest challenges to public health facing us today.

If we go back in time to the end of World War I, around 1918 or so, and use that timeframe as a baseline of EMF exposure among the general public, you come to the astonishing conclusion that EMF exposure has increased about 1 quintillion times over the past 100 years.

Knowing the impact EMFs can have, it’s completely irrational to assume that this radical increase won’t have adverse effects.

My book, “EMF*D,” is an attempt to inform you about the hidden harms of EMF and what you need to do to protect yourself and those you love. In it, you’ll learn:

In my book, I also reveal the reasons why you’ve been left in the dark about this serious health threat.

Brain cancer is not the only, nor the major, concern

While a number of studies have shown that cellphone radiation can trigger brain cancer this is not the greatest cause for concern.

Your brain does have a far greater density of VGCCs than other organs, but so does your nervous system and heart, as well as male testes.

As a result of the elevated density of VGCCs in these areas, EMFs are likely to contribute to neurological and neuropsychiatric problems, as well as heart and reproductive problems, including but not limited to cardiac arrhythmias, anxiety, depression, autism, Alzheimer’s and infertility and miscarriage — and these conditions are far more prevalent than brain cancer.

That said, studies have also linked radiofrequency radiation equivalent to that emitted by 2G and 3G cellphones to other forms of cancer, including heart tumors.

This includes U.S. government-funded animal studies published in 2018 that were further corroborated by the Ramazzini Institute that same year.

As early as 2011, the evidence was strong enough for the International Agency for Research on Cancer, the cancer research arm of the World Health Organization, to declare cellphones a Group 2B “possible carcinogen.”

I’ve already mentioned one of the primary mechanisms by which EMFs harm your biology — i.e., the creation of peroxynitrites, which are potent oxidant stressors — but EMFs also damage your health in other ways.

For example, the enzyme ATP synthase — which passes currents of protons into the mitochondrial intermembrane space, similar to current passing through a wire — powers the generation energy of the creation of ATP from ADP, using this flow of protons.

Magnetic fields can change the transparency of the flow of protons to the mitochondrial intermembrane space, thereby reducing the current.

As a result, you get less ATP, which can have system-wide consequences, from promoting chronic disease and infertility to lowering intelligence.

EMFs may also alter your microbiome, turning what might otherwise be beneficial microbes pathogenic or toxic. This too can have far-ranging health effects, since we now know your microbiome plays an important role in health.

Any and all health ramifications attributed to previous generations of wireless technologies will be exponentially magnified with the rollout of 5G, which is simply being added on top of the already existing wireless infrastructure.

A main concern with 5G is that it relies primarily on the bandwidth of the millimeter wave (MMW), which is known to penetrate 1 to 2 millimeters of human skin tissue. There’s also evidence suggesting sweat ducts in human skin act as antennae when they come in contact with MMWs.

Many can feel the impact of MMWs as a burning sensation and/or pain, which is precisely why it’s used in nonlethal crowd control weapons. MMW has also been linked to eye problems, suppressed immune function and altered heart rate variability (an indicator of stress) and arrhythmias.

Two years later, more than 180 doctors and scientists from 35 countries signed a petition to enact a moratorium on the rollout of 5G due to the potential risks to wildlife and human health.

Protect yourself from excessive EMF

There’s no doubt in my mind that EMF exposure is an important lifestyle component that needs to be addressed if you’re concerned about your health, which is why I spent three years writing “EMF*D.”

My aim was to create a comprehensive and informative guide, detailing not only the risks, but also what you can do to mitigate unavoidable exposures.

To get you started, see the tips listed in my previous article, “Top 19 Tips to Reduce Your EMF Exposure.”

If you know or suspect you might already be developing a sensitivity to EMFs (full-blown hypersensitivity can often strike seemingly overnight), mitigating your exposures will be particularly paramount.

Many sufferers become obsessed with finding solutions, as the effects can be severely crippling. My book can be a valuable resource in your quest for relief.

The EMF Experts website also lists EMF groups worldwide, to which you can turn with questions, concerns and support, and safespaceprotection.com lists a number of publications where you can learn more about the dangers of EMFs.

Should you need help remediating your home, consider hiring a trained building biologist to get it done right. A listing can be found on the International Institute for Building-Biology & Ecology‘s website.