A panel of international lawyers on Tuesday published an official legal definition of the term "ecocide," making it possible for nations on the front lines of the climate crisis to hold big polluters accountable. 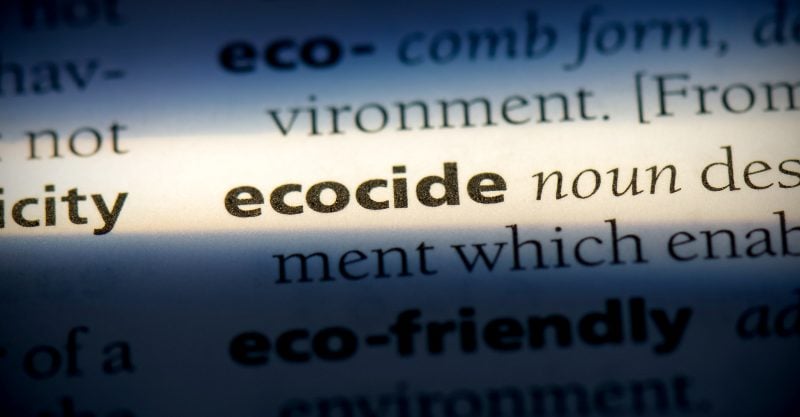 A panel of international lawyers on Tuesday published an official legal definition of the term “ecocide,” which for decades has been condemned by conservationists and climate action campaigners but which until now has not been recognized as a crime.

With the Stop Ecocide campaign’s new legal definition of ecocide, organizers and experts seek to eventually incorporate the prosecution of environmental destruction into the International Criminal Court’s (ICC) mandate, making it possible for nations on the front lines of the climate crisis — which are the least responsible for the carbon emissions and industrial pollution that is heating the planet — to hold big polluters accountable.

“The time is right to harness the power of international criminal law to protect our global environment,” said Philippe Sands, a professor at University College London and co-chair of the expert drafting panel convened by Stop Ecocide. “Seventy-five years ago, ‘crimes against humanity’ and ‘genocide’ were spoken for the first time, in Nuremberg’s Courtroom 600, and my hope is that this group will be able to draw on experience since that day to forge a definition that is practical, effective, and sustainable, and that might attract support to allow an amendment to the ICC Statute to be made.”

The panel said two thresholds must be reached to prosecute ecocide as a crime in the ICC: perpetrators must have knowledge of substantial likelihood of severe widespread or long-term damage, and actions must be “unlawful or wanton.”

And secondly: acts must be unlawful or wanton pic.twitter.com/Hwr258vg6p

Representatives of the South Pacific island nation of Vanuatu were the first to call for ecocide to be internationally criminalized alongside war crimes, when EU ambassador John Licht addressed the ICC’s Assembly of States Parties in December 2019.

“We believe this radical idea merits serious discussion,” said Licht at the time, triggering similar calls from leaders in the Maldives. Residents of the two low-lying island nations face some of the most serious and imminent risks of the climate crisis, with 80% of the Maldives’ 1,190 islands standing only three feet above sea level and 97% reporting shoreline erosion.

Frontline nations like the Maldives and Vanuatu are also some of the communities bearing the least responsibility for the climate crisis, compared to major contributors like the U.S., China and Russia.

“We see no serious efforts on the part of large emitting countries to save humanity from the impending climate change catastrophe,” said Maldivian diplomat Ahmed Saleem in 2019.

Jojo Mehta, co-founder of Stop Ecocide, told CNBC Tuesday that less than two years after the calls from the two island nations, “This conversation is no longer falling on deaf ears and, indeed, it is actually gathering momentum at quite a pace.”

French President Emanuel Macron has called for ecocide to be prosecuted in the ICC and Belgian ambassadors brought up the issue in their official statement to the Court in 2020, while political parties in Sweden, the Netherlands, Portugal, Spain and the UK have supported the calls.

“If we had ecocide [recognized by the ICC], what it might mean is that you could prosecute crimes against the environment potentially without there needing to be a connection to some widespread human atrocity,” Rachel Killean, a law professor at Queen’s University Belfast, told CNBC. “It is a different way of looking at what atrocity looks like.”

Mehta noted that the world’s biggest contributors to ecocide could be referred to the ICC by the UN Security Council, should the Court include it in its mandate, since countries including the U.S. and Russia are not signatories of the ICC’s Rome Statute.

Despite the uphill battle to hold powerful nations to account, proponents of the movement argue the fight to include ecocide in the ICC’s mandate is worthwhile in order to help create a “moral red line” regarding the destruction of the Earth.

“At the moment, if you are campaigning for human rights and social justice, at least you know that mass murder and torture are beyond the pale,” Mehta told CNBC. “They are criminal and they are condemned. But, if you are in the environmental arena, you don’t have that. You’re standing on a void. There’s a missing foundational piece that says this much damage is simply not allowed.”

Should the ICC recognize ecocide, the campaign says, it could lead to access to reparations for countries like Vanuatu and the Maldives as well as other frontline communities and greater public understanding of the planetary emergency.

“None of the international laws protect the natural world as an end in itself,” said Sands as the expert drafting panel released the definition. “This draft law is not only anthropocentric, it is ecocentric. I’m not starry-eyed about law — the mere adoption of a text does not stop horrors. But it can change consciousness.”